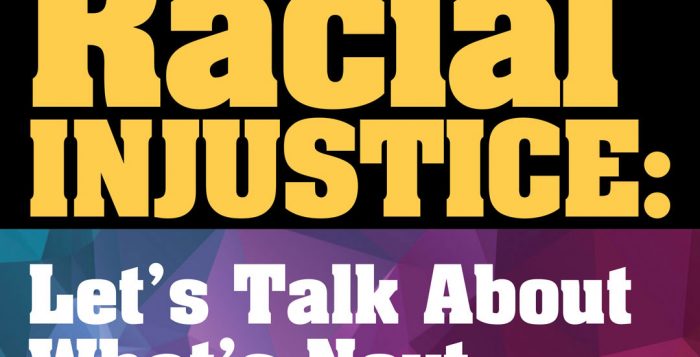 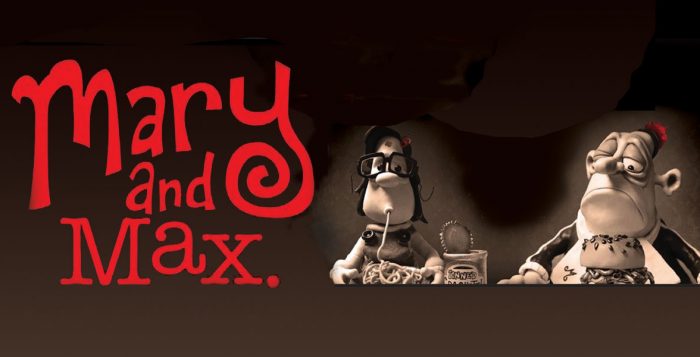 In recent days, the senseless, brutal killing of George Floyd and its ripple effects have placed the issues of racial inequality and injustice under an intense spotlight across the state, the nation, and around the world. To promote campus-wide dialogue, Southern is hosting a virtual panel discussion with Southern faculty, students and community members. Please join us. 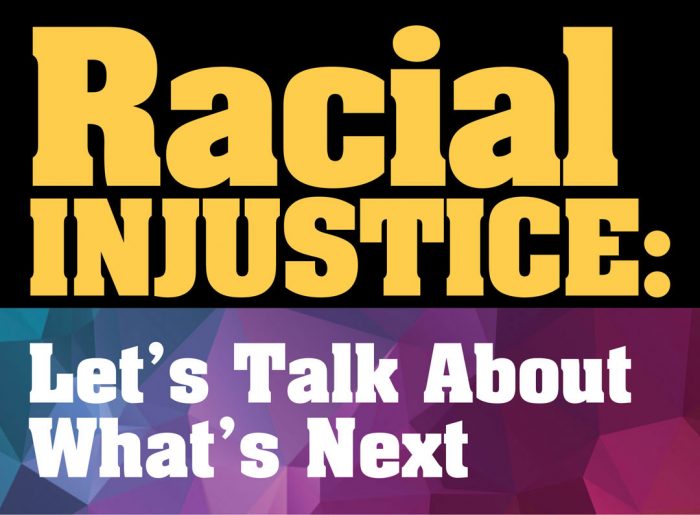 Submit questions for the panelists here.

Solomon James, ’22, a rising junior at Southern, is a community activist and the co-organizer of a recent racial justice march held in Danbury, Conn., in solidarity with the Black Lives Matter movement.

Julian Madison is an associate professor of history at Southern with a scholarly focus on race and ethnicity, civil rights, culture and the Jazz Age. His books and manuscripts cover a wide range of topics, including desegregation of sports and the fight to end school segregation.

Cassi Meyerhoffer is an associate professor of sociology at Southern. Her research and teaching interests focus on systemic racism, racial residential segregation, and the role of race in American policing. She is working on a book proposal: From the Old Jim Crow to the New: Tracing the Roots of Reconstruction to Residential Segregation, Police Brutality, and the Mass Incarceration of Black Bodies.

Orisha Ala Nzambi Ochumare is one of the co-founders of Black Lives Matter New Haven. She is an anti-racism organizer and has done work with youth in local schools. She is currently the LGBTQ+ youth program officer at the New Haven Pride Center.

Timothy Parrish is a professor of English at Southern, an award-winning writer, and one of the architects of the university’s MFA program. He is the author of three books, including Fear and What Follows: The Violent Education of a Christian Racist, a Memoir (U Press of Mississippi). 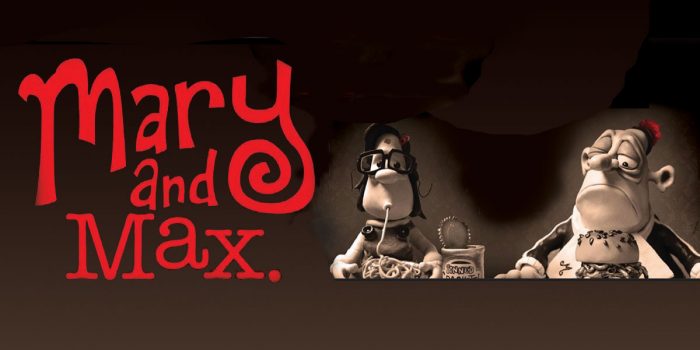 ReelAbilities is the largest disability film festival in North America dedicated to promoting awareness and appreciation of the lives, stories and artistic expressions of people with different abilities. This spring, Southern is joining venues in New York, Cincinnati, Pittsburgh, Boston, Chicago, Portland, and San Francisco, among others, to feature films selected from over 1000 competitive submissions from an international community and reviewed by the screening committee in New York City, where the festival premieres each year in March.

Southern’s contribution to the 2018 festival — the first time the festival has been in Connecticut — is a screening of Mary and Max, a tale of friendship between two unlikely penpals: Mary, a lonely eight-year-old girl living in the suburbs of Melbourne, Australia, and Max, an obese, middle-aged Jewish man with Asperger’s, living in New York. “This film will be the first time ReelAbilities has been in Connecticut,” says Fran Prezant, of the Department of Communication Disorders, “and it will be here at SCSU.”

The film, to be screened in the Adanti Student Center Theater on March 19 from 5-7:30 p.m., has some adult content and is not appropriate for young children. A panelist talkback will follow the screening of the film, and light refreshments will be served. Admission is free. The theater is physically accessible and the film is captioned.

Initiated in New York in 2007, the ReelAbilities Film Festival presents award-winning films by and about people with disabilities in multiple locations throughout each hosting city. Post-screening discussions and other engaging programs bring together the community to explore, discuss, embrace, and celebrate the diversity of our shared human experience.

“At a time when discussions about differences and inclusion are so important in this country,” Prezant says, “recognizing the strength in diversity and challenging stereotypic notions is important.” The festival offers a great opportunity, she says, “to discuss differences rather than ‘deficits,’ bust stereotypes, and challenge long-held and often erroneous assumptions.”

ReelAbilities events have been held in over a dozen cities in North America and have expanded from the United States to Canada and soon, Latin America. Since its start, ReelAbilities has been consistently receiving an increasing number of outstanding film submissions from across the globe.

The campus screening is sponsored by Judaic Studies with contributions from Deans’ Offices: Arts & Sciences, Health and Human Services, and Education; and the Department of Communication Disorders.

Learn more about this screening. 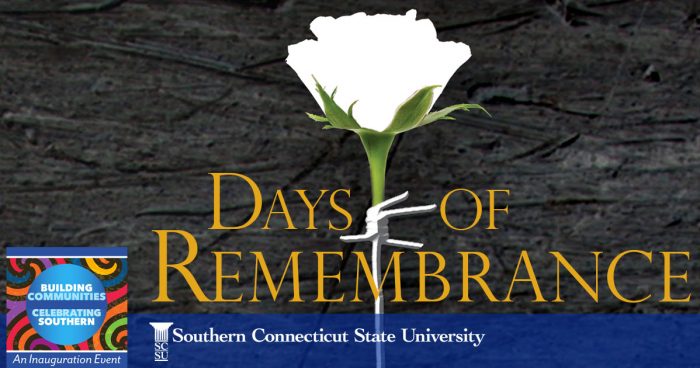 Southern will host three events in honor of Holocaust Remembrance Day, Monday, April 24, 2017. All events are free and open to the public.

1-2 p.m.: Professor Jason Stanley, Ph.D., Jacob Urowsky Professor of Philosophy, Yale University, will share the largely unknown story of his grandmother Ilse Stanley’s heroic efforts to save more than 400 Jewish prisoners from concentration camps between 1936 and 1938, as well as her efforts to help many others escape from Germany. He will read from his grandmother’s 1957 book, The Unforgotten.
– Learn more.

University Choir Concert: ‘We Will Remember….’

7:30-9:30 p.m.: The concert commemorates Holocaust Remembrance Day, and also honors the 100th anniversary of the founding of the New Haven Chapter of the NAACP.  Musical selections include Daniel Hall’s hauntingly beautiful piece for choir and viola, “Reflections from Yad Vashem”; Verdi’s “Chorus of the Hebrew Slaves” (Va Pensiero); Leonard Bernstein’s “Somewhere” from West Side Story; American spirituals arranged by Moses Hogan, Sheldon Curry and Thomas Trenney; a musical reflection for trumpet and choir inspired by Martin Luther King’s “I Have a Dream” speech; and Wilhousky’s famous concert arrangement of the “Battle Hymn of the Republic.” – Learn more. 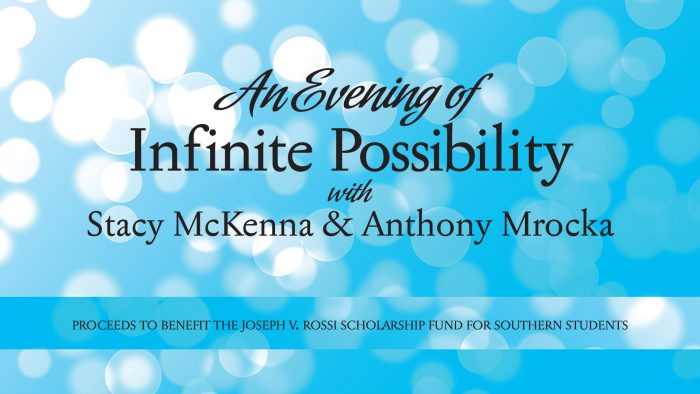 What’s truly in our way of creating the life we desire? Are you ready to experience the freedom that comes with taking ownership of your life?

Evolving Soul presents “An Evening with Infinite Possibilities” with Stacy Mckenna and Anthony Mrocka on Tuesday, April 18, 2017 at 6:30 pm.

Esteemed Speaker and Executive Coach, Stacy McKenna will open up the evening followed by acclaimed Evidential Medium, Anthony Mrocka, who will talk about healing, bereavement, and connecting with loss.