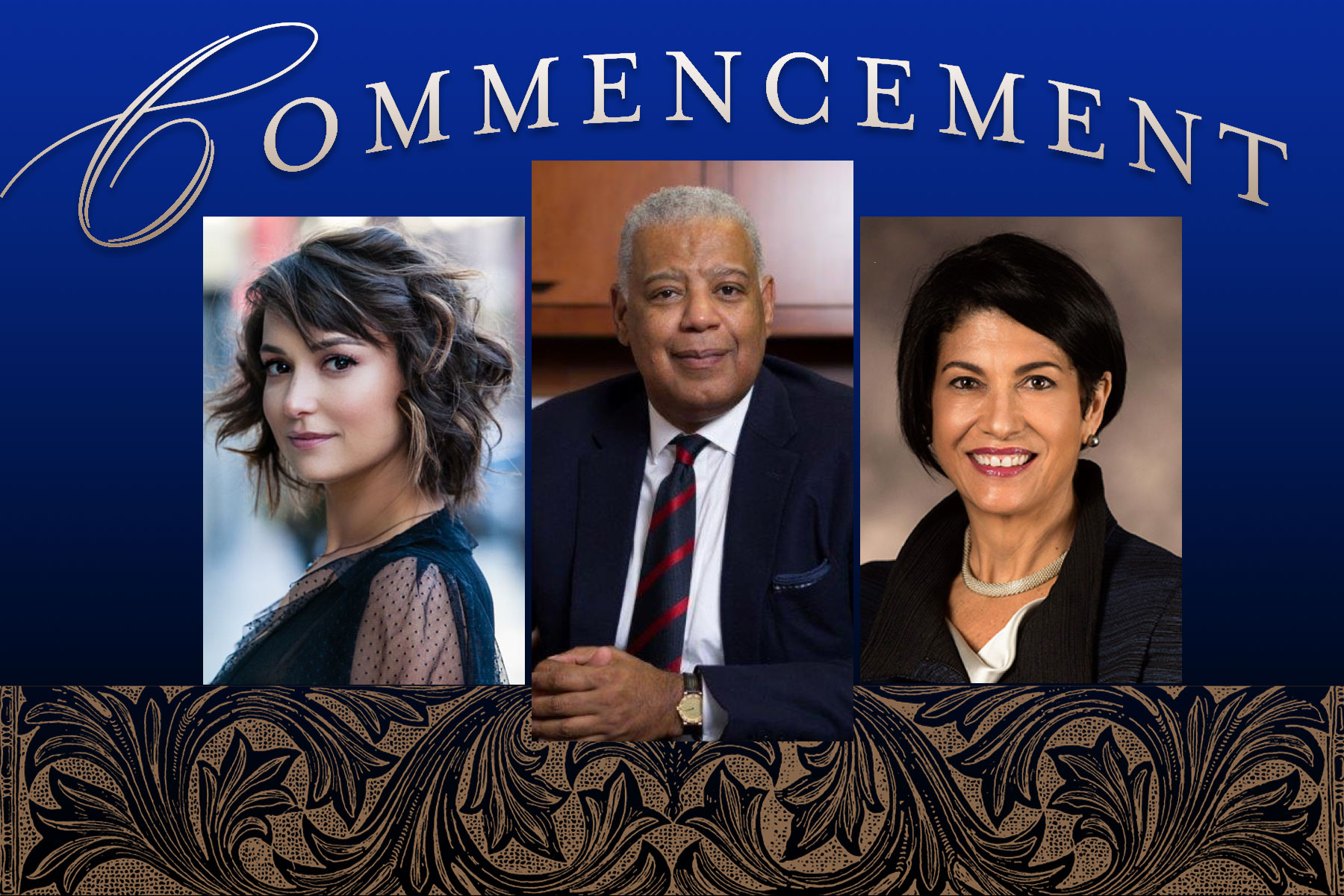 Milana Vayntrub, actor, activist and humanitarian, will be the keynote speaker at the Undergraduate Commencement ceremony on Friday, May 24, 2019, at the Webster Bank Arena in Bridgeport, Conn. The ceremony begins with an academic procession at 10:15 a.m.

Michael R. Taylor, Chief Executive Officer for the Cornell Scott-Hill Health Center, will be the speaker at the 2 p.m. Graduate Commencement for the Schools of Arts and Sciences and Health & Human Services on Thursday, May 23, 2019. Lynn M. Gangone, an education leader, association executive, lobbyist, and policy analyst, will speak at the 7 p.m. ceremony for the Schools of Business and Education, including Library Science. Both graduate commencements will be held at the Lyman Center for the Performing Arts.

Many know Milana Vayntrub (above left), as saleswoman Lily Adams in AT&T’s popular series of commercials, or as Sloan from This Is Us on NBC. But she also has a compelling story as an ex-refugee and advocate for combatting the global refugee crisis.

At the age of two, Vayntrub fled religious persecution in Uzbekistan with her parents to make a home in America. Twenty-five years later, she co-founded the grassroots #CantDoNothing organization, created to encourage others to give their time, money, and voice to assist refugees worldwide.

An Upright Citizens Brigade-trained comedian, Vayntrub has appeared on TV and the big screen, including on Showtime’s House of Lies and HBO’s Californication, as well as in Ghostbusters and Life Happens. She was also cast in the role of Squirrel Girl in Marvel’s 2018 series, New Warriors, on Free Form.

In 2016, Ms. Vayntrub was named among the top 100 thinkers, makers, and doers in marketing and media by Adweek, which described her as a “creative force for good.”

Michael R. Taylor (above, center) has been employed by the Cornell Scott-Hill Health Center (CS-HHC) since 2010 and served as its chief executive officer since 2012.

Taylor is a creative entrepreneur who is deeply passionate about community health’s capacity to improve the quality of people’s lives. Under his guidance, CS-HHC’s leadership team fortified the health center’s financial position; blazed a trail of care integration, quality, and patient centeredness; renovated and expanded or replaced existing care sites; added new care sites and services; and bolstered internal systems and infrastructure.

Due in large part to these efforts, CS-HHC is projected in the next two years to direct more than 700 staff members who annually serve over fifty thousand Greater New Haven residents.

She began her career in education working on Carl Perkins Vocational Equity grants, working through the New York State Education Department, and went on to develop and deliver PK-12 professional development to teachers and guidance counselors in New Jersey.

Later, as vice president of the Maryland Independent College and University Association, she led the association’s academic policy and related lobbying work, with specific oversight of teacher education and education accreditation.

She has held faculty appointments at two colleges of education: visiting professor at the George Washington University Graduate School of Education and Human Development in Washington, D.C., and full professor (clinical) at the University of Denver’s Morgridge College of Education.

Prior to her appointment as president and CEO of the American Association of Colleges for Teacher Education (AACTE), she served as vice president at the American Council on Education (ACE), where she and her team guided ACE’s suite of programs, products, and services for current and future leaders.