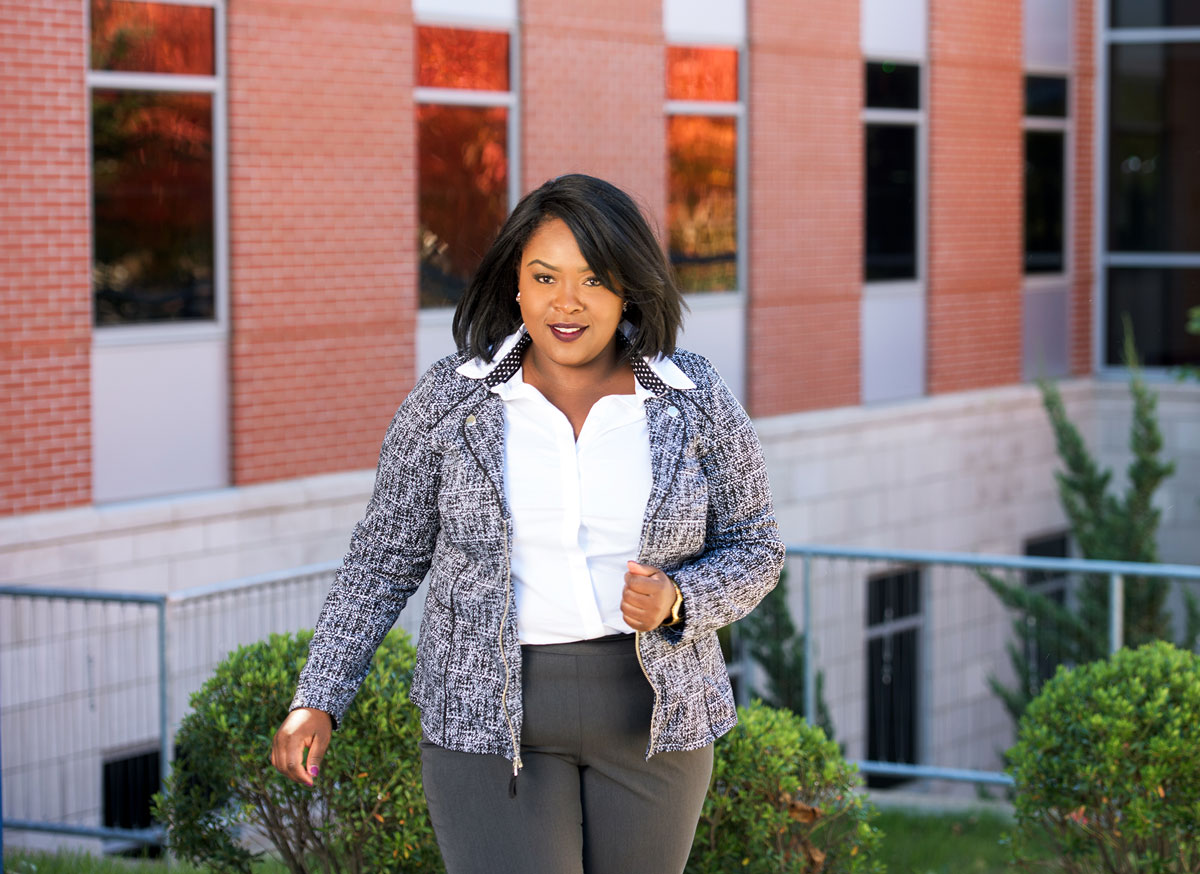 Meesha Ann Daley has always found joy in fashion.  “I was born into it,” says the Jamaican native who is enrolled in Southern’s Master of Business Administration (MBA) program. “My uncle is a tailor. Growing up, I was constantly in his sewing room, going through his scrap box for fabric to make doll clothes.”

Modeling and pageants held allure as well. A passageway in the family’s home became an impromptu runway for the young Daley, who practiced walking with books balanced on her head. She also spent hours happily watching pageants with her mother —  “a petite, gorgeous woman,” she says.

“The expectation was for me to be a contestant someday. Unfortunately, I was not the size you are ‘supposed to be’ in these competitions,” she says with a smile.

Growing up, Daley unsuccessfully tried a slew of diets.  “At home I was a social butterfly. I felt beautiful, loved and supported. At school I was the reserved child in the corner. I was teased constantly about my weight,” she says.

Shying away from social gatherings, Daley focused on her school work — and teachers gradually noticed the quiet girl in the back of the room who received top marks. “For some kids, it’s soccer. For me, it was school work. I had found my strength. Then came the revolution,” says Daley. She became a peer counselor and the prefect of her class, and went on to graduate valedictorian of Pembroke Hall High School in Kingston, completing her studies at the age of 15. After furthering her education at a second high school, she was accepted at the University of Technology (UTech) in Jamaica. “It’s famous in the U.S. for our athletes — Usain Bolt and Asafa Powell,” says Daley.

At UTech, she majored in accounting and minored in banking and financial services. For the first time, Daley also was free to choose her school clothes, a significant turning point for the fashion-focused young woman. “Jamaica has a very strict school system. We wore uniforms. My uncle made every single one, from the time I was 2 years old to 18.”

When Daley signed on to a program that permitted students to work in the U.S. during the summer, her uncle made her work clothes as well. Staying with extended family in New York City from May to August, she held a variety of jobs, often simultaneously. She worked as a junior auditor at a law firm, babysat, and took shifts at McDonald’s and Old Navy. Then it was back to UTech to finish up to eight classes a semester.

After receiving her undergraduate degree, Daley moved to the U.S. permanently, with a five-year plan that included starting a business and earning a graduate degree. When an early attempt to run an online clothing store was unsuccessful, she put that dream on hold and decided to earn a master’s degree. Prompted by an advertisement, she came to Southern’s graduate student open house, and met Samuel K. Andoh, now dean of the School of Business.  “He helped me throughout the whole process, even though a person at his level could easily have passed me on to an assistant,” says Daley. “Others say the same. He really cares.”

A modeling career also has become a reality for Daley, who entered her first modeling competition — Full Figured Fierce — after being inspired by the organization’s message of “empowerment, self-love and positive body image.” She won the online competition and has gone on to additional modeling work, most recently gracing the cover of the September issue of Queen Size Magazine. The photo shoot, which focused on “clothes college students need in their closets,” took place on Southern’s campus. Daley suggested the site. After modeling for the publication several times, she was asked to serve as its fashion editor.

She says she’ll always be drawn to fashion and plans to revisit her dream of opening an online clothing store. But another issue has become a driving force as well. Working with classmate Asa Cort, Daley hopes to launch #trustfund, a seminar covering financial topics for young people and their families.  “This seminar not only will cover money management, but also the important role education plays in developing financial stability,” says Daley.

She notes that the goal of the project meshes closely with her work as a plus-size model — furthering her commitment to self-empowerment. “In my eyes, we need not associate the concept of beauty with a size, color or shape. That is the industry I want to help build . . . the industry I am moving toward.”