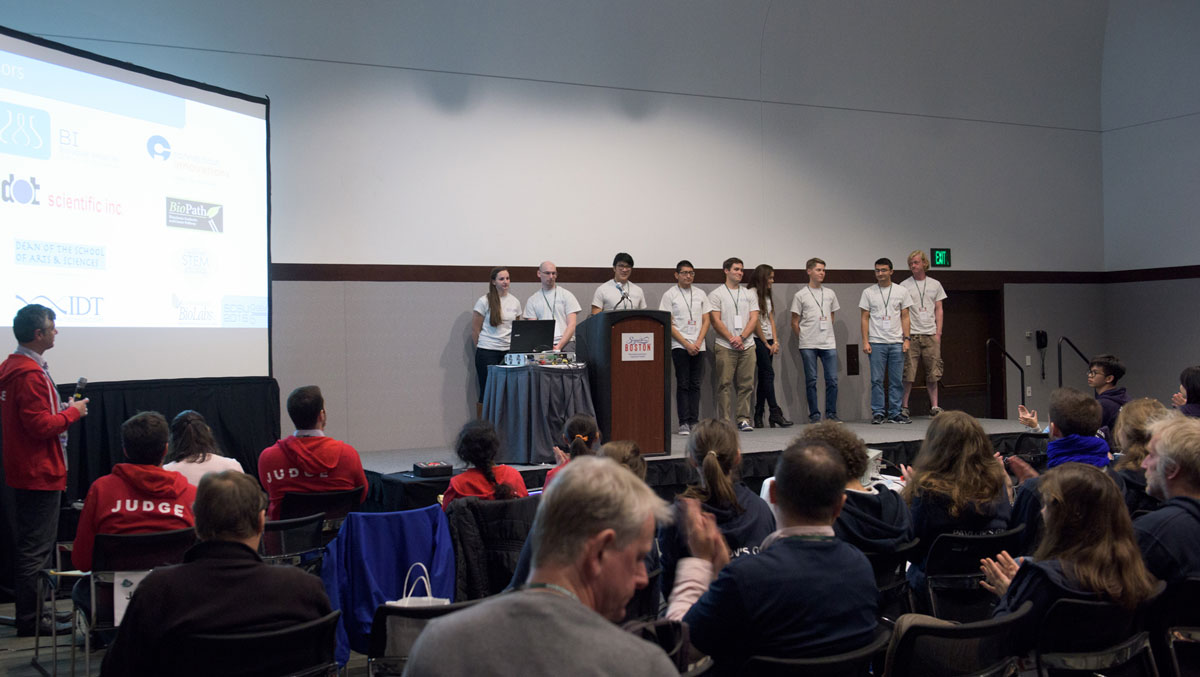 A team of Southern science students recently earned a bronze medal at a prestigious international synthetic biology competition for its work to find a faster method to detect tuberculosis.

The nine students – hailing from a variety of disciplines within the sciences – participated in late October at the International Genetically Engineered Machine Competition in Boston. The event included nearly 300 teams of students – mostly undergraduates, but some graduate and high school students. It marked the first time Southern competed in the program, and SCSU was among only three teams from Connecticut to do so this year. Both Yale University and the University of Connecticut also earned bronze medals.

“This was a terrific opportunity for our students to showcase their talents and abilities, and the team is extremely proud to have earned a bronze medal,” said Nicholas Edgington, team advisor and SCSU associate professor of biology.

The teams competed against one another in various categories, as well as sought to attain a medal (gold, silver or bronze) in their own right by meeting a variety of criteria. Unlike the Olympics, every team can earn a medal. But not all do.

The team sought to develop a screening test for tuberculosis that is both accurate and speedy. The more accurate tests today require a wait that can take several weeks before learning the results.

“TB is one of the leading killers of human beings worldwide with a third of the world’s population infected by the Mycobacterium tuberculosis,” said Bryan Pasqualucci, student leader of the leader said. “Like so many diseases, early detection is important in treating TB. Unfortunately, some tests for TB require a wait of several weeks before learning the results, so we want to see if we can find a way to shorten the time needed for some of these tests.”

The SCSU team sought to use gases called Volatile Organic Compounds that a person infected with TB emits. One particular gas, 1-Methylnapthalene, has been shown to be a positive marker for TB.

While the project is incomplete, the information attained has been sent to the iGEM headquarters repository for future teams to advance. In addition, Thomas Hoang, a member of the team, has applied for an SCSU Undergraduate Research Grant to complete the project.

Most infected by the TB bacteria develop a latent state of the disease for many years, if not forever. But even those individuals face a 10-percent lifetime risk of developing an active form of the disease.