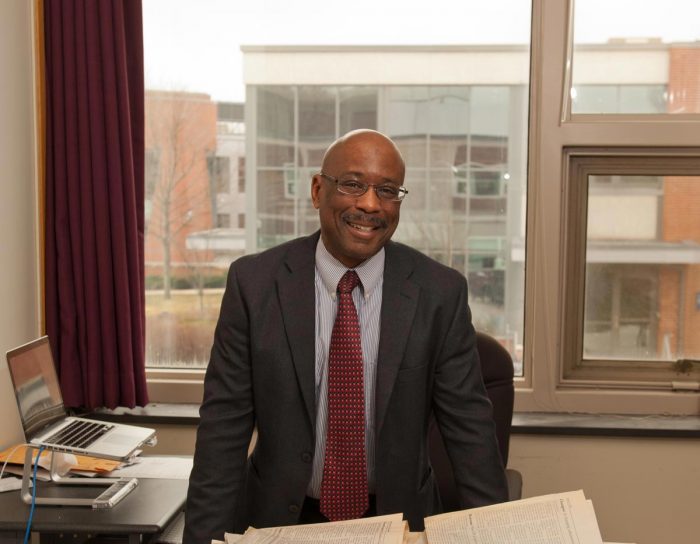 Perhaps the most controversial word in the American lexicon is a word many do not speak. The word commonly known as “the n-word” has a longer history in the United States than many people realize, but what is behind its taboo nature and its loaded meanings?

“Everyone has an n-word story,” says Journalism Professor Frank Harris III, and a couple of years ago, he set out on a journey across America to get to the bottom of the word’s meanings and place in American culture. The product of his research, the film “Journey to the Bottom of the n-Word,” combines interviews with diverse Americans, research through hundreds of newspaper archives, and surveys of today’s news media. In the film, Harris takes viewers on an informative, provocative journey that fosters discussion about “the word that persistently rattles the chain from our past to our present,” as he describes it.

On November 16, as part of Social Justice Week, Harris screened his film and led a discussion about it in the Adanti Student Center Theater.

Of his project, Harris says, “Frankly, I wasn’t sure what kind of response I would receive. After all, it’s not every day that a man with a camera walks up to people and asks them about the n-word and their first or most memorable experience with it.”

The film began with his research on the many racial names by which Americans of black African descent have been identified over the years. “My focus soon shifted toward the n-word and my desire to track its origins,” he says, “as well as the experiences that Americans of all backgrounds have had with this word.”

Harris says, “It is an interesting encounter when the interviewer and interviewee are of the same race. It becomes even more interesting when the two are of a different race. The stories told by the many people I interviewed, interspersed with the word’s usage in America’s news media, provided a compelling story that I wanted to share.”

The film examines the haunting, persistent link of the word and its variant forms with the words “kill” and “death” and violence against blacks. It includes painful stories from older black Americans about their experiences with the word, along with portrayals of the experiences of younger African Americans who use it as an acceptable and different term of endearment, never having felt its sting. Harris has also captured stories from whites, Asians, Hispanics and others in America about their experiences from parents who taught them the word or told them never to say it.

Among those who appear in the film are former Black Panther Party leader Ericka Huggins, discussing the n-word and the Panthers; journalist Charlayne Hunter-Gault, recalling her experience at the University of Georgia in the early 1960s; Yale child psychiatrist Dr. James Comer discussing the effects of the n-word; and Mississippi civil rights workers describing the physical pain of violence that often accompanied the word in their experiences.

In addition to interviews, Harris uses original newspaper clips in the film to illustrate the striking ways in which the word has been used. The clips dispel the myth that rappers and hip-hop artists created the variant form of the word that ends in “-a” rather than “-er.” The film shows that the word was in use freely during and after slavery in America and reveals that even then, blacks were referring to each other using the n-word. Among the discoveries Harris made in his research was that Abraham Lincoln used the word during his 1860 presidential campaign stop in Hartford, Conn.

The film has been an Official Selection in the 2016 Twin Cities Black Film Festival and the 2016 Baltimore International Black Film Festival. It will be screened at a festival in Texas in 2017. Harris says of the film’s reception, “It’s quite amazing, the impact it has had.”

In addition to teaching journalism at Southern, Harris is an award-winning Hartford Courant columnist.