Home On Campus Reading the Text of Fashion 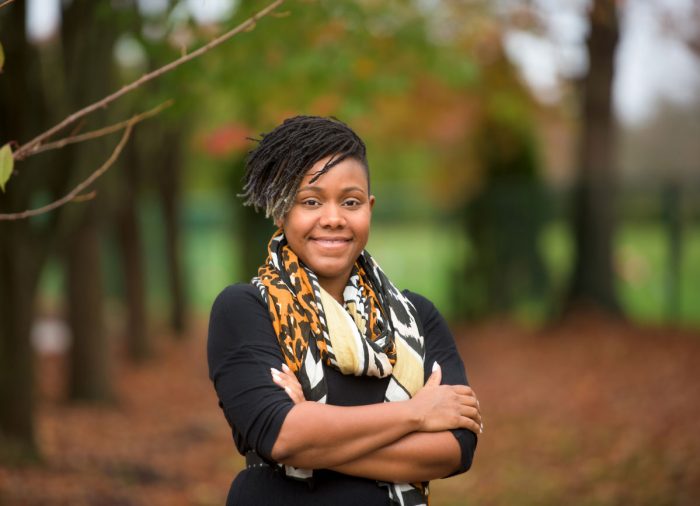 When you get dressed in the morning, are you thinking about how your clothing, or how you wear it, tells the world a story about you or your place in history?

Siobhan Carter-David, assistant professor of history, is a “reader” of clothing and fashion as historical texts and says, “We can learn a lot from studying fashion. It tells us so much about the cultural life of a particular group over time in different places.”

Currently teaching “Dress in Recent U.S. History: The Life and Times of 10 Iconic Fashions,” Carter-David  presented a talk on November 3, “Supreme Style: Fashion, Aesthetics, and the Making of a Black Heterodox Islamic Tradition.” Her talk was part of the interdisciplinary forum for faculty in the arts, humanities, and social sciences to present and discuss new scholarship, with special emphasis on emerging topics, methodologies, and areas of research in the 21st century.

In her “Dress in Recent U.S. History” course, Carter-David discusses the social and historical context and meanings of several post-World War II fashions. Blue jeans, the miniskirt, the dashiki, the studded leather jacket, evening gowns, the power suit, workout wear, the sneaker, and the hoodie all come under her lens in the course.

She plans to publish her dissertation, “Issuing the Black Wardrobe: Fashion and Anti-fashion in Post-Soul Publications,” in which she discusses what fashion and dress mean in “a post-civil-rights moment.”

Her November 3 talk, although focused on fashion and history, is a side project, she says. She became interested in the topic because, she says, “so little is done on the Five-Percent Nation,” which she explains is an offshoot of the Nation of Islam and is also called the Nation of Gods and Earths (NGE). Founded in Harlem in 1964, NGE is a heterodox black Islamic faction that is intentionally flexible and individualized in its doctrine. Women members have used the NGE’s modest dress code to create an evolving aesthetic that has influenced and been influenced by many facets of post-civil rights urban life.

Carter-David says she finds the NGE interesting because of its flexible doctrine. “Everything is negotiable,” she says. “People are affiliated with it, but not members.”

This flexibility comes into play in the clothing worn by Five Percenters, which is why their fashions drew Carter-David’s particular attention. She explains that in the NGE, women – whose clothing is called “refinements” — are referred to as Earths and men as Gods (as in the Nation of Gods and Earths). Earths are expected to cover three-quarters of their bodies, as three-quarters of the earth is covered by water. The fashions are hip-hop inspired, and many rappers of the 1990s were affiliated with the Five-Percent Nation, such as Erykah Badu and Wu-Tang Clan.

Carter-David conducted oral histories for most of her research on this project, as so little academic research has been done on fashion in the NGE. What an Earth wears is negotiated between herself and her male partner, and every woman who becomes affiliated with NGE has to be taught about it by a man – not necessarily a male partner, but a man nonetheless. Yet in spite of this male influence on Earths’ experiences and refinements, Carter-David found that much of what is done with women’s fashions is feminist in nature. Her use of oral histories – interviews with Earths — helps her tell a story that is less about seeing dress through a men’s lens than through a female one.

In the 1960s, for example, older Earths would teach the younger ones how to dress, and Earths would make clothing for each other, as some of the articles of clothing were not easy to find. Earths wear headwraps, and women would share with each other in private how to wrap their heads. Carter-David says this practice has been changing with the advent of YouTube; Earths can now watch videos that show them different styles of wrapping their heads. Yet “women have created their own spaces in terms of how they do their refinement,” Carter-David says, “rather than letting men dictate it.”