Living the Dream in Poland 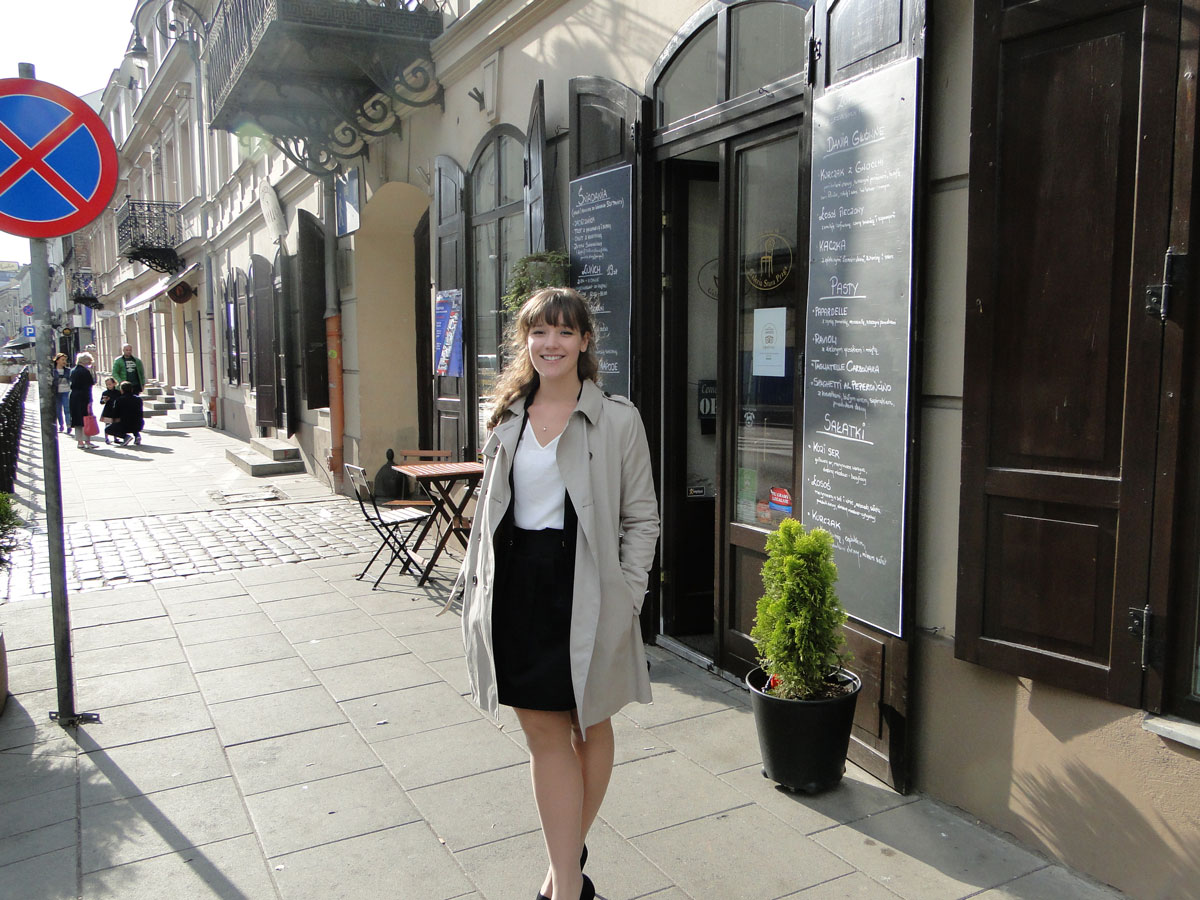 Southern’s chapter of the Society of Professional Journalists (SPJ), recently was awarded the Region 1 Outstanding Campus Chapter Award for 2015-16 “in recognition of outstanding programs and activities that enhance professionalism, thereby contributing service to the Society and to the profession.” Region 1 comprises chapters in the states of: Connecticut, Maine, Massachusetts, New Jersey, New York, Pennsylvania and Rhode Island.

The SCSU SPJ President for 2015-16 was journalism major Monica Zielinski. Recipient of the Robin Marshall Glassman Outstanding Journalism Graduate award for 2016, Zielinski is now working for a publication in Warsaw, capital city of Poland.

“Monica, was one of those rare students who achieve academic success, at the same time giving back to students and the campus,” said SCSU Journalism Chair Cindy Simoneau.

We asked Monica a series of questions about her new professional career and her experiences as a journalism student at Southern:

Tell us about your new job?

I’m currently working in Warsaw, Poland, as the head journalist for Time for Polska. It’s a new international project headed by the respected national newspaper, Rzeczpospolita. I’m interviewing CEOs and founders of top Polish brands and companies and writing articles about their products and services. The glossy magazine will be distributed at Polish diplomatic posts around the world, European parliaments, selected airports and hotels, and international trade fairs. So far I have interviewed the CEO of Inglot Cosmetics as well as founders of several tech start-ups such as Social WiFi — which allows businesses to provide free Wi-Fi while interacting with customers — and Monster & Devices, which developed a way to turn any wall or flat surface into a touchscreen. Among others are clothing companies and furniture designers. The mission of the project is to market Poland on a global scale to show investors and ambassadors that business in Poland is thriving and is worth paying attention to.

How did you come to work in Poland after attending Southern?

As a first generation Polish-American, I have been traveling to Poland every other summer my whole life to visit my grandparents and extended family. Last summer, I studied abroad in Warsaw for four weeks through a program called School of Russian and Asian Studies in partnership with Collegium Civitas in Warsaw. It was the first time the program was offered in Poland and I studied Central European history as well as security and defense. I’ve been to Warsaw several times before the program began, but living in the city was a whole new experience. I fell in love with Warsaw and I was devastated I had to leave after one month.

I kept the dream of living in Warsaw in the back of my mind throughout senior year. I even applied for the Fulbright English Teaching Assistant position for Poland and made it through the first round as a semi-finalist. I decided not to give up and researched English publications in Warsaw and stumbled upon Poland Today which was founded by a British native in 2012 who moved to Poland. I contacted the founder and received a response the next day. He was interested in my story and said he had an opportunity for me if I would come to Warsaw.

After the Time for Polska project is completed, I plan to be the online content manager for Poland Today. For now, I contribute articles, translate articles from Polish to English, and copyedit. Originally I decided to give Warsaw a try for the summer but I enjoyed my time here so much that I rented an apartment for a year and I’m truly loving it. I couldn’t have done it without the support of my family however. My grandparents live in a town just two hours outside of Warsaw so I frequently make trips for home-cooked meals and a break from the city. My sister has already booked a flight to visit for Christmas and my parents are very supportive because I’m following my dreams and doing what I love.

Why did you want to become a journalist?

In high school, I signed up for an introduction to journalism class and I really enjoyed it. Senior year I took the course again but was the editor-in-chief of the school newspaper. I fell in love with design and layout and spent hours outside of class perfecting the layout. As the sole editor, I had the freedom to create a paper I was proud of. I also enjoyed interviewing students and faculty for articles because I quickly realized how interesting people can be and they all have their own unique story to tell.

Did you have any internships, research experiences, or similar during your time at Southern?

At Southern, I was a journalism major and communication minor. I completed a summer internship at Connecticut Magazine, which gave me insight into the magazine publication world. I was also the online editor at Southern News junior year and managing editor senior year.

As for Society of Professional Journalists, I was the secretary junior year and then president senior year. I was also in the Honors College so in addition to the rigorous classes, I had to complete and defend an honors thesis. I decided to do a creative project and created my own women’s magazine for college students. It included profiles, articles, photographs and layout design all done by me. I successfully defended my thesis in April.

How did your participation in SPJ enhance your education?

My participation in SPJ helped my education incredibly because I had a variety of responsibilities and I didn’t have anyone to guide me through it because the previous president and vice president graduated. I started my presidency with enthusiasm and determination. I ensured we were present at the club fair and talked to as many students as possible.

We attended the national as well as Region 1 SPJ conferences, organized a diversity event to talk about the race in the news, held the annual journalism alumni night and organized a trip to tour Bloomberg News in New York. I have to attribute our success to our incredible members: Anisa Jibrell and Vivian Englund (Vice Presidents), Josh Falcone (Treasurer), Natalie Barletta and Dylan Haviland (Secretaries) and members Danielle Campbell and Mihai Tripp.

Our members also volunteered and helped organize the Region 1 conference held right at Southern this past spring. I also moderated a panel discussion. I learned that organizing anything at a university involves a lot of planning ahead of time and a lot of paperwork from administration. I also managed the club’s Twitter and Owl Connect pages and promoted our events.

My position at SPJ taught me to lead weekly meetings, stay on top of required paperwork, promote the club and plan events in addition to being a full-time student Honors College student, managing editor at Southern News and part-time assistant at AXA Equitable Life Insurance.

What do you miss most about SCSU?

I miss my professors the most. After four years, the journalism department became like a family to me. I would see some professors twice a day for classes or meetings. They would always give the best professional advice and I just miss seeing them every day and hearing their “war stories” as Professor Jerry Dunklee (SCSU SPJ faculty advisor) would say.

They truly wanted to see us succeed and I would pop my head into their offices to boast about even small accomplishments. Unlike some departments with a larger student population, the journalism professors always made an effort to meet with me.

My favorite type of writing is human interest stories because I love sitting down with a subject and letting them tell me about themselves. Some people have never spoken to a journalist, nonetheless about themselves to anyone. Once I show genuine interest, they open up and sometimes won’t stop talking.

What is your ultimate career goal?

Working in Poland has made me realize how much globalization is impacting the world. I have attended conferences with business leaders, economists and political figures from Europe, Asia and the Americas. I learned about how interconnected the nations truly are and I developed an interest in this so I would like to continue to work as a journalist with a focus on international relations.

Why would you recommend journalism as a career?

The world needs respectable journalists right now. Between the political, economic and demographic issues in the United States and abroad, journalists need to seek the truth and report it. It takes investigative work, solid writing skills and a thick skin to be a journalist but it’s rewarding to see your byline next to an article.

I would recommend journalism as a career because it can take you all over the world. With technology, people can work from home or in a country thousands of miles away—which is what I have done.