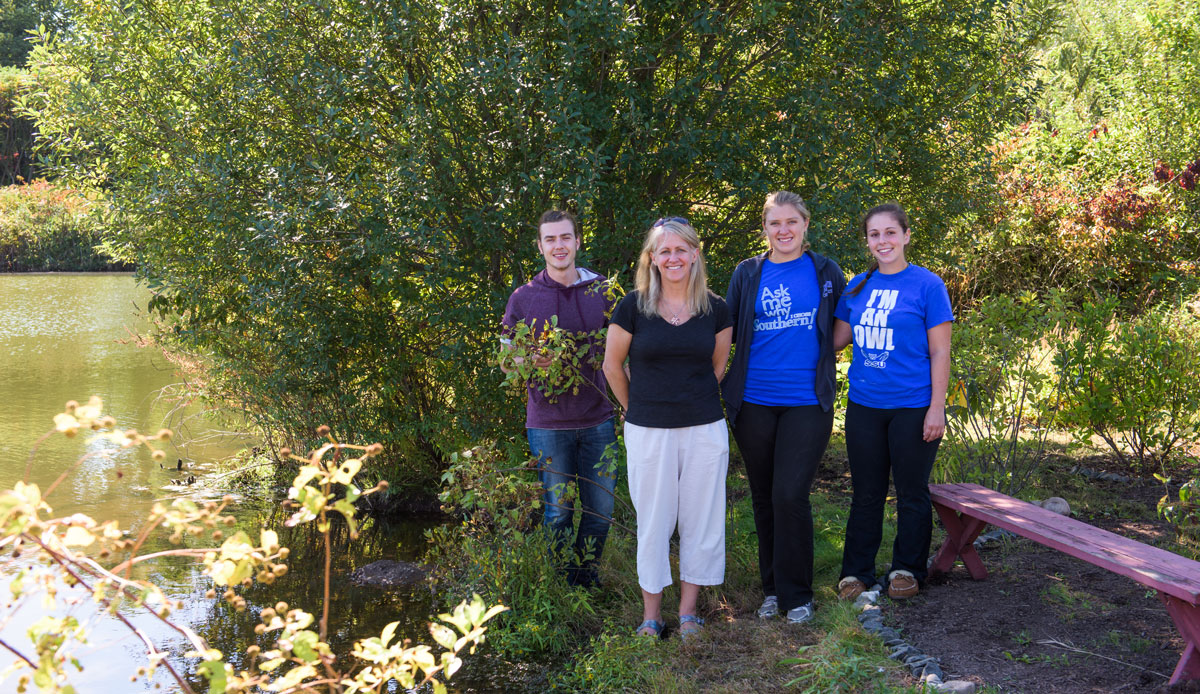 The birds and the bees love Southern, and there’s a reason for that: the university is part of a city-wide initiative – the Urban Oasis partnership — to establish habitats more hospitable to birds and pollinators. Campus projects like the Science Garden built last spring near the Academic Science and Laboratory building and the refurbishing of the area around Beaver Pond contribute to a network of wildlife-friendly sites across the city.

A few years ago, Audubon Connecticut, a state office of the National Audubon Society, brought together several local groups to discuss how they might improve wildlife habitat in New Haven. The idea was to create areas across the city plentiful in plants that produce fruit and seeds for birds and that host insects.

The university’s participation in the Urban Oasis project is just one of many initiatives that have helped it gain recognition in the Princeton Review Guide to Green Colleges for three years running.

Together, says Suzanne Huminski, sustainability coordinator, these groups and organizations in the Urban Oasis partnership are working to establish bird- and pollinator-friendly habitat “hotspots” throughout the city, with the goal of revitalizing a habitat corridor to provide nourishment for birds and pollinators – such as bees – and create natural spaces for the community to enjoy and connect with the outdoors.

“The habitat corridor we are trying to create,” explains Huminski, “connects larger tracts of open space, like East and West Rock Parks, Lighthouse Point, and West River Park. New Haven is located along the Northeast flyway for migrating birds, and New Haven was designated an area of significance for birds, and also a Bird Treaty City in the summer of 2016, in part because of our partnership.” At Southern, Huminski says, “we’ve planted a site with native shrubs and wildflowers near Beaver Pond and the practice rugby field, and cared for them. The shrubs we’ve added are especially nutritious to birds and provide berries in the winter.” Student interns in the Sustainability Office manage the site: one intern, Kiersten Simon, a senior geography major, is one of the first Southern students who will graduate with the recently established sustainability concentration in geography. She is earning internship credit this fall for expanding and caring for the Urban Oasis site, and will help map the site to track the species there. Over the summer, students Riley Scheuritzel, Mary Fedorko, and Cody Edson helped to maintain the site.

Huminski also credits the work of Southern students, faculty, and staff volunteers during the Big Event and Day of Service each year as an important factor in the site’s success. Over the years, they have helped with removing invasive plants like purple loosestrife, autumn olive, and phragmites (sea oats). The invasives grow and spread quickly since they don’t have predators to limit them, and these plants are not food sources for local birds. “Our site is small,” Huminski says. “We carved it from a large area dominated by invasive plants.” Anyone is welcome to volunteer to help with the site.

Huminski and her interns plan to monitor whether biodiversity at the site is improving over time with their efforts. She says that there are already very interesting birds on campus – “even other than the geese” — because of the pond and the undisturbed “no-mow” area that stretches beyond the baseball fields by the water. Earlier in the semester a large red tail hawk was spotted on the bleachers at the rugby field, and grackles, a woodpecker, yellow warblers, black-capped chickadees, and ducks are often seen at the site.

Part of the Urban Oasis plan is to leave certain “volunteer” plants that are native but that some might consider weeds. Huminski points out that goldenrod is a very important source of protein for native bees as well as honeybees, and “in the late season, this protein is important before they hunker down for the winter. Bees are critically important to ecosystem health because of their pollination services. And right now, the purple aster and other wildflowers are dripping with bees. We’re really lucky!”

Huminski invites the community to come check out Southern’s Urban Oasis site as well as the others in New Haven, including: