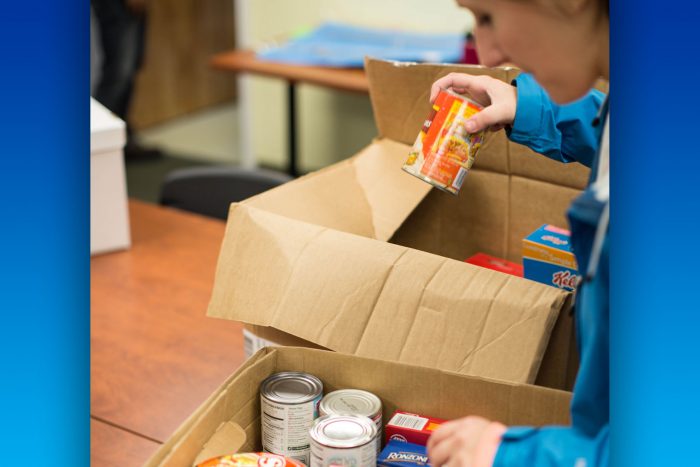 Responding to an issue occurring at colleges nationwide, Southern is looking to establish an on-campus food pantry and social services resource center to help a growing number of students meet their basic needs of food, shelter, transportation, child care and other essentials.

Based on surveys conducted with Southern students over the last few years, about 30 percent of the student population falls into the category of food insecure, said Jules Tetreault, dean of student affairs. (Food insecurity is a term to describe a lack of adequate access or money to buy food.)

“It’s a problem we are seeing at all levels – local, state and national,” Tetreault said. “In fact, 14 percent of the total population in Connecticut is considered food insecure, while at a national level, we are seeing a range of 14 to 40 percent at four-year universities.”

Student Affairs is planning to have a pantry operating by the spring semester, eventually including a social services resource center that would provide guidance for students struggling with other basic needs.

To support the project, the university is donating proceeds from its 125th anniversary gala on Oct. 4.  The sold-out “A Night of Inspiration,” in the Adanti Student Center Ballroom, will feature Tony Award-winning actor Leslie Odom Jr. – who played the role of Aaron Burr in the original cast of the hit Broadway musical Hamilton.

“As we conclude our 125th anniversary year, it’s important to look at how Southern has changed, especially in recent times,” said President Joe Bertolino. “The demographics of our population are vastly different, the expectations of students, parents and employers are increasingly outcomes oriented and the competition for enrollment and private support has intensified.

“With this in mind, the continued well-being of our students is a high priority. It is important to acknowledge the complexities of their lives, and particularly, those of our low income and working students.

As the cost of higher education has increased, the availability of financial assistance has not kept pace – and these factors have seen an increase in the number of students who are not able to meet their basic needs, Bertolino said.

“Simply put, when students can’t eat, when they have no place to sleep, when they have little family encouragement for bettering their lives through education, we must do more than offer classes and assignments,” he said. “We must holistically help them navigate the complexities and challenges that they face, even as we focus intentionally on supporting their capacity to learn and ability to persist to graduation.”

The problem is also being addressed at the national level. Southern alumna and Connecticut Congresswoman Jahana Hayes, ’05, has introduced a new bill, along with Connecticut Senator Chris Murphy, to address the food insecurity crisis among college students. The Closing the College Hunger Gap Act would empower low-income college students with the information they need and ultimately reduce food insecurity on campuses nationwide.

Tetreault said Southern is at the higher end – though not at the highest – of the food insecurity category. He said this is due, in part, to the demographics of the student population with a growing percentage of students who belong to racial and ethnic minorities, as well as a relatively high percentage of first-generation college students. He said these students tend to fall lower on the socioeconomic strata.

Tetreault echoed President Bertolino’s comment that financial assistance at the state and federal levels has not kept pace with the increased costs to attend college.

He noted that K-12 school systems throughout the country offer free or reduced lunch prices to students based on family income, and some also offer similar breakfast programs. “But the need and the hunger don’t stop when you graduate from high school.”

Tetreault added that Southern already has a community garden and a food recovery program at Connecticut Hall – the university’s main dining hall – which are designed to benefit less fortunate individuals in the local community.

“A food pantry would be consistent with these efforts, but would directly benefit our own students,” he said.

The university has also adopted smaller scale programs to help needy students, such as a mobile food pantry, departmental food closets and a “swipe it forward” program designed to enable students support their peers through meal donation in the dining halls. 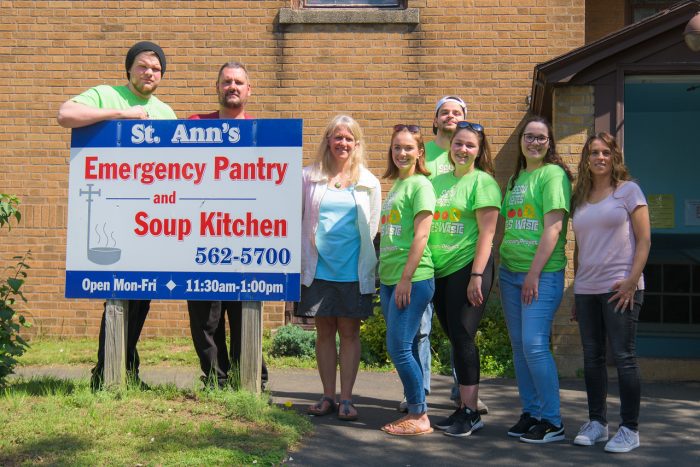 Ever wonder what happens to that sandwich in The Bagel Wagon that has reached the “best by” date on its label? Prior to this past summer, it would be thrown away, but now, foods that Chartwells can no longer sell when they reach that date no longer go to waste, thanks to the efforts of the Sustainability Office, Chartwells, and a dedicated student intern.

This past summer, Southern joined the Food Recovery Network, a national organization that supports college students recovering perishable and non-perishable foods on their campuses that would otherwise go to waste and donating them to people in need.  Heather Stearns, recycling coordinator, says that Chartwells hired a student intern, Ashley Silva, who is focused on sustainability, and has been working with her on a weekly food collection schedule. Each week, Silva makes the rounds to the Bagel Wagon, Davis Outtakes, and the North Campus Kiosk and collects perishable foods — including salads, sandwiches, yogurt, fruit, bagels, and hummus — that have reached their “best by” date. The foods would be thrown away when they reach that date, but they are still safe to eat. So after Silva collects them, they are donated to Connecticut Food Bank, a private, nonprofit organization that works with corporations, community organizations, and individuals to solicit, transport, warehouse and distribute donated food.

In addition to the food collected from campus Chartwells locations, fruits, vegetables, and herbs from the campus organic garden are harvested and donated to local soup kitchens such as the Community Dining Room in Branford and St. Ann’s Soup Kitchen in Hamden. Pounds of produce such as squash, cucumbers, tomatoes, eggplant, various greens, corn, peas, potatoes, peppers, and basil, are donated on a regular basis. This fall, Southern donated almost 200 pounds of fresh produce that was grown at the garden, located behind Davis Hall.  Suzanne Huminski, sustainability coordinator, says that throughout the fall semester, between the garden and FRN efforts, over 600 pounds of food have been collected and donated.

To promote community awareness of hunger and food insecurity in Connecticut, students working on FRN at Southern organized a recent campus event called “Hunger 101,” meant to be a conversation about food access and food justice in the state. The U.S. Department of Agriculture defines “food security” as “access by all people at all times to enough food for an active, healthy life.” According to the Sustainability Office’s website, over 14 percent — of New Haven County residents — nearly 123,000 people — are food insecure, and over 19 percent of all hunger-stricken residents are children.

To expand the university’s food donation program, the Sustainability Office is placing permanent food donation boxes in the lobby of the Facilities building, in the Wintergreen building, and on the second floor of Engleman, outside of the FYE Office. Members of the university community are encouraged to donate non-perishable food items year-round. Donations from these collection sites will be brought to the Connecticut Food Bank in Wallingford each week. Stearns also encourages staff and faculty to bring food items to the Sustainability Office during the regular Swap Shop open houses.

Anyone interested in helping with FRN efforts on campus can call Silva in the Sustainability Office at (203) 392-7135.