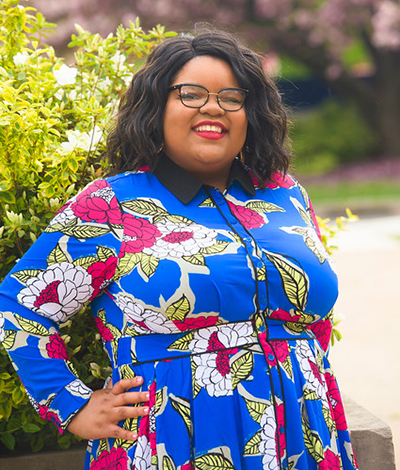 Mick Powell is a poet who, she says, “likes revolutionary acts of resistance.” Resistance and revolution can take many forms, and Powell weaves both into her writing through poetic form, language, subject matter, and imagery. “I like that poetry can challenge what we typically think of as poetry,” she says, and indeed her own poems – often provocative and experimental – can push the reader out of familiar territory.

Powell, who graduates this spring with her MFA in creative writing, has just won two major prizes for her work, so her powerful writing is garnering significant attention. Her chapbook, chronicle the body, won the 2017 Chapbook Contest held by Yemassee, the official journal of the University of South Carolina, and her poem “last night I dreamed KJ undead” was a winner in the Winter Writing Contest sponsored by Columbia Journal, based in the Graduate Writing Program at Columbia University School of the Arts. The chapbook is based on the thesis she wrote for the MFA, and the poem she wrote for her friend KJ, who was murdered in the Pulse nightclub massacre in Orlando.

Powell says of her work, “My tendency is to write about bodies and how we use them. Sometimes when we experience violence or hear about it, we forget that both parties are human beings. My call to remember the body is to show that we’re all human.” She shares the stories of people whose stories don’t usually get shared, she says, “sometimes my own stories and sometimes other people’s stories.”

English Professor Vivian Shipley, who was Powell’s thesis adviser, says Powell’s poems are “memorable because they are physical and remind us to think of people who might otherwise be forgotten. What unites her intense and compelling poetry is her knowledge that in spite of the complexity of being human, we cannot allow a world that threatens to drown out song to swallow passion and laughter. Mick Powell’s poems contain a deep understanding of what it is to be human because she has cored them from the heart.”

Like many writers, Powell began writing when she was a child. She grew up in Bridgeport and attended an art high school in Trumbull, where she focused on creative writing, writing mostly fiction while also “dabbling in poetry.” She started a literary magazine at her high school and was the fiction editor. “I definitely thought of myself as a fiction writer then,” she says, but when she went off to college at the University of Connecticut, a poetry survey course she took in her first semester intrigued her. “I became interested in how poets tell stories as opposed to how fiction writers tell stories, “ she says. “Poetry allowed me to explore different forms of narrative.”

With the rise of spoken word and slam poetry, and their accessibility through such online platforms as YouTube, Powell says she became more familiar with these forms. She shifted from writing fiction to writing poetry as an undergrad, but “always knew I wanted to go to grad school. I was especially interested in women’s studies and poetry and found myself wanting to talk about poetry through a women’s studies lens.” She was attracted to Southern because of both the Women’s Studies Program and the MFA program and started at the university in 2016.

Of her prize-winning work, Powell says that the chapbook is a collection of experiences, “a lot dealing with my family, but also asking, how do we navigate in the world, how does the Internet facilitate our interactions with each other? Relationships are very important to me – familial relationships, relationships with ourselves and with the community, as well as love relationships.”

Chapbook judge Aaron Coleman, a poet whose work Powell admires, said of Powell’s collection: “Urgent music and breathtaking self-reflection spill from chronicle the body. …I’m also reminded of all the ways we must work to remember the simple miracle of our bodies, their wounds and healing, in a world that so often refuses to see the body’s – in particular: black women’s bodies’ – trials and complexities. But chronicle the body lives and sings in the midst of our American mess, crafting its own rituals and music. . . Especially in our current moment of unmasking dangerous facades of masculinity, I’m grateful for the brilliant courage we witness here. chronicle the body is a collage of the sacred, mundane, familial, and existential; together, these images, emotions, and stories thrive as one ecstatic whole….chronicle the body’s time has come — as both testament and challenge, this is a book we need.”

As the winner of the chapbook contest, Powell will receive $1000 and 25 copies of her published chapbook. For the Columbia contest, her poem will be published in the journal and she will receive $500.

Currently the dean of students at a social justice high school in New Haven, Powell says that after she graduates she’d like to teach. “I like to talk about poetry, and I like to support people on their journey.”

Read a sampling of Powell’s writing: