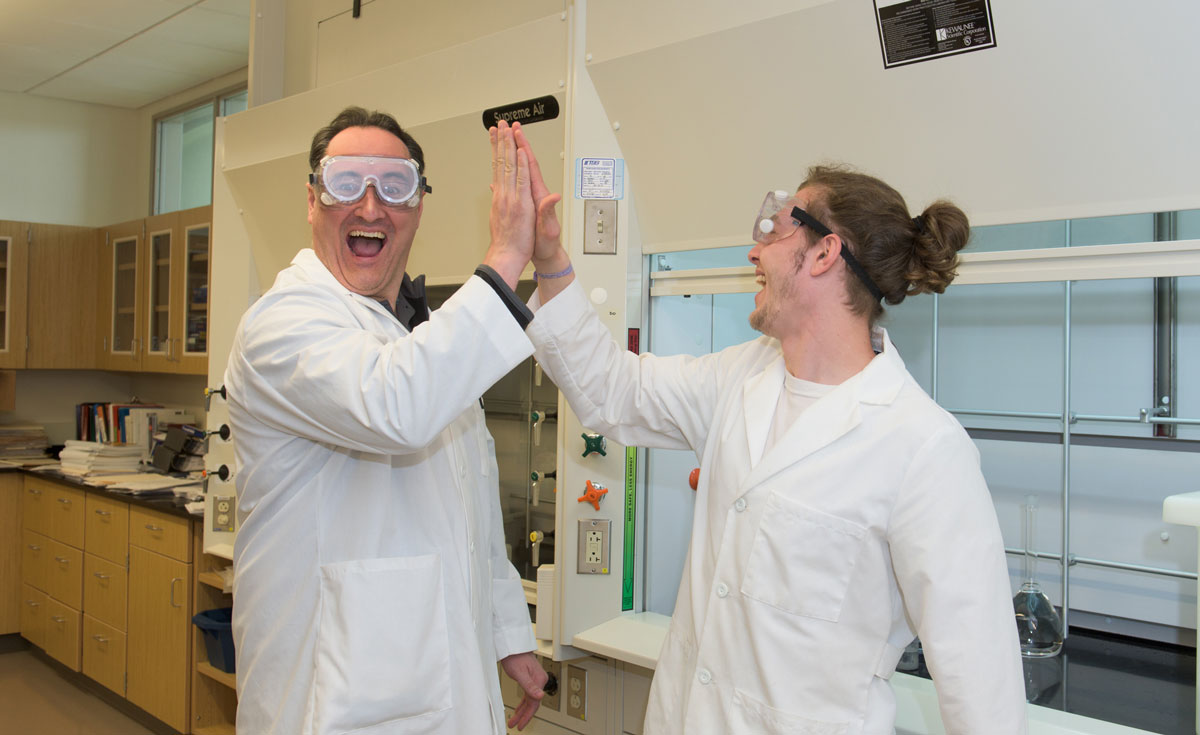 He failed an AP Chemistry class in high school. But five years later, Cody Edson has not only earned both a Bachelor of Science and Master of Science degree in chemistry as part of an accelerated program at Southern, but has co-developed a testing kit to detect even small amounts of arsenic in drinking water.

And in the fall, Edson will begin a Ph.D. in chemistry program at Rensselaer Polytechnic Institute.

The kit is believed to be more sensitive than many other testing procedures, accurately measuring arsenic levels as low as 5 parts per billion, according to James Kearns, an SCSU assistant professor of chemistry who served as Edson’s faculty advisor. Kearns recently obtained a provisional patent for the testing kit.

The World Health Organization and the Environmental Protection Agency consider arsenic levels above 10 parts per billion to be unsafe. But current tests for arsenic often are unable to accurately detect anything less than 20 parts per billion.

Although similar projects to improve the accuracy and sensitivity of arsenic testing are under way around the globe, the Kearns-Edson test could be part of a public health breakthrough as an estimated 100 million people worldwide have significant amounts of arsenic in their drinking water. While a large percentage of those individuals live in parts of Asia, such as Bangladesh, there are some locations in America that have significant levels of arsenic in the water supply, as well. Kearns said they tend to be located in mountainous regions, such as New Mexico.

Edson explained that the new test replaces the traditional mercury bromide strip with one made of silver nitrate. He said the testing procedure also uses digital analysis.

“I am happy that it might be able to save lives and protect the health of a large number of people in the future,” Edson said. “It would be great if we could market it, too. But I really want to use my skills as a scientist to help the environment and to help people.”

Arsenic is considered to be a toxic substance with carcinogenic properties. Acute symptoms of arsenic poisoning include gastrointestinal distress. Long-term effects include lung, kidney and liver problems, as well as skin discoloration.

Kearns said he is quite impressed with Edson as a student. “I have probably taught nearly 2,000 students during my career, and Cody is one of the most successful of all of them,” he said.

Edson said he began working with Kearns in his junior year. In addition to their work on arsenic detection, the two also have worked on a project pertaining to the testing of toxic metals in agave nectar, which is prevalent in Ecuador.

Edson noted that he has learned a lot from his mentor, who he now considers a friend, as well. “We’re homies,” chuckled Edson, who said the two often talk about mutual interests, such as Heavy Metal music– which might seem appropriate for scientists who actually study metals.

Edson, a guitarist, resides in Milford. He considered joining the U.S. Navy when he was in high school, as well as having pondered a possible career in firefighting. But after learning about Southern’s Honors College program from an SCSU admissions representative, he decided to apply. He doesn’t regret the decision.

As a student at SCSU, he helped start a program in which campus food leftovers were collected and sent to nearby food pantries.