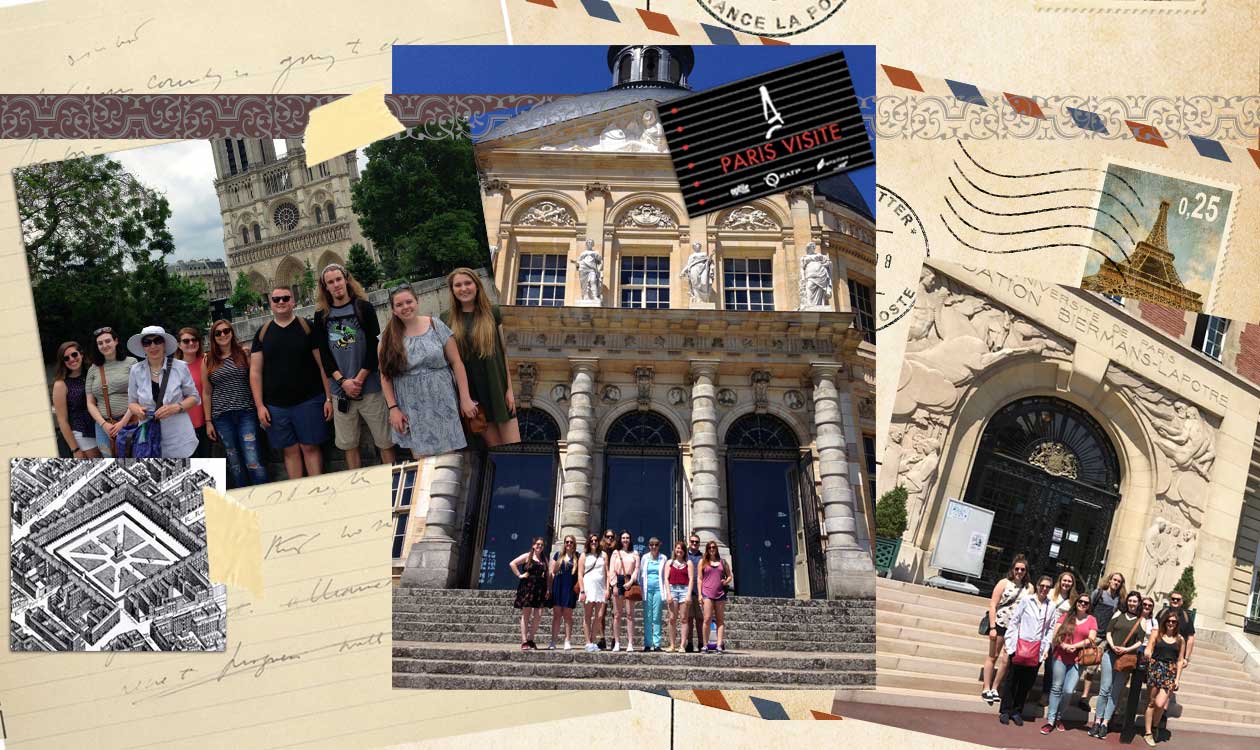 Dear Friends of the Southern in Paris Program,

It is almost cliché to say, but time has flown by. Today marks our eleventh day in Paris, and the students have already experienced so much. I’d like to take a moment and reflect on our activities, as well as showcase some of the students’ work so far.

We departed New York’s JFK airport on May 31st on an overnight flight to Paris. Students settled in and enjoyed the in-seat entertainment, food, and service provided by our carrier, Air France. Although airline food does not have the best reputation, some students remarked that they were surprised by the quality. Arriving in Paris at 8 o’clock in the morning, we were greeted by one of the longest immigration control lines the program has ever had to endure. Luckily, the agents were quick and efficient, and we were picking up our bags and getting into the shuttle in no time.

Our residence, the Foundation Biermans-Lapôtre, welcomed us with open arms, clean rooms, and recently installed Wi-Fi. Built to house students from Belgium and Luxembourg, the foundation allows groups hailing from other countries to stay for short visits, and we are very grateful for their continued hospitality and professionalism.

After settling into our rooms, students headed to the local grocery store to pick up essentials. Now a bit more familiar with the neighborhood, the group returned to the foundation for a well-deserved rest. Student intern Andrew “André” Janz and I took advantage of this moment to visit the nearest transportation office to purchase our Navigo cards. These magic items allow us to use every facet of Parisian public transportation, even including the regional train system! For many of the students, it is quite a change from relying solely on a personal vehicle to get around. That evening, we took a walk to a neighborhood known as “Montparnasse,” which is anchored by one of the only skyscrapers inside the city limits. There we enjoyed some refreshments at a local café while enjoying one of the most popular Parisian pastimes: people watching! Once we had had our fill, we enjoyed a dinner of galettes and crêpes at Crêperie Plougastel, an event that has become a bit of a tradition for the program on the night of arrival. Filled with cheese, chocolate, and a variety of other tasty ingredients, it was time to turn in for the night.

Friday included a few program set-up activities, lunch at a student-favorite bakery called Paul, and a walk through the courtyards of the Louvre. Students had the evening free to themselves, and many took advantage of the mild weather to explore more. On Saturday, we made our first visit to the Louvre, where we saw the three ladies: the Mona Lisa, the Venus di Milo, and the Victory Angel of Samothrace. These pieces of art alone draw an amazing number of tourists each day, and many students were surprised at how much activity buzzed around them.

On Sunday, we made our first program visit ever to the village of Provins, a UNESCO World Heritage site about eighty kilometers outside of Paris (http://whc.unesco.org/en/list/873). Known for its medieval architecture and underground tunnel system, the city was one of the most important economic centers of the European world during the 12th, 13th, and 14th centuries. The next day, we continued our exploration of the medieval world with a visit to the Basilica of Saint-Denis, often considered one of the first examples of “French Work,” as it was known at the time, and that we have come to know as Gothic Architecture. Students marveled at the stained glass, arched ceilings, and funerary statuary since Saint-Denis is the traditional resting place of the French monarchy. Following this early example, Sainte-Chapelle did not disappoint during our visit the following day. An example of later gothic style, Sainte-Chapelle was built to house the relics that king Louis IX, later Saint-Louis, brought back from the crusades. With walls appearing to be made of only stained-glass, this favorite stop on the trip continues to marvel visitors nearly 770 years after its consecration. Finally, we ended that day’s visit with a stop at the Conciergerie, formerly part of the royal palace and often used as a prison.

On Wednesday, students met at the Musée de Cluny, a museum dedicated to medieval life and art. Built upon Roman baths, the museum houses a very impressive collection of tapestries, the most notable of which is probably the series known as “La Dame à la licorne,” or “The Lady and the Unicorn.” After leaving the museum, we took a detour and stopped in at Angelina’s, a famous tea room specializing in hot chocolate and delicious pastries. Students marveled at the consistency of the drink, remarking that it was indeed like drinking melted chocolate. They all agreed that it was like nothing they had had before! After enjoying our short rest at Angelina’s, we made our way to the Louvre to explore the medieval foundations discovered during the renovations of the 1980s, followed by a short tour through the French small-format paintings. We then walked along the rue de Rivoli and the Seine to get to our dinner reservation at the Trumilou. Offering traditional French fare, the restaurant did not disappoint. Hesitant to try them on their own, students eagerly split a plate of a dozen escargots. Savoring the buttery, garlicky, and earthy flavors, many of the students were surprised at how much they enjoyed the typically French dish.

Thursday and Friday were free days for the students, while Saturday we left the city for an all-day visit to the 17th-century castle Vaux-le-Vicomte. A highlight of the trip, the property offered up all it had to offer to the students, who explored the property for nearly six hours. As spectacular as the building itself is, the gardens are indeed the highpoint. Designed by famed landscape artist André Le Nôtre, the gardens play tricks on the visitor’s perspective and uncover surprises as s/he walks further into the grounds.

Interested in reading what the students have to say? Take a look at our program’s Tumblr page at https://scsu2017paris.tumblr.com.

“What caught my attention were the stained glass windows all around the church. The usually dark colors like the red and the blues shone exceptionally well. I enjoyed the light pouring out into the church.”

“One of my fondest memories from my first visit to France is my first visit to the chateau Vaux-le-Vicomte. I was born and raised in a small town (around 5,000 people) and find it somewhat difficult to adjust to the pace of city life. While Paris is a fantastically unique city, the Vaux has always offered me a welcome respite from the hustle and bustle of metro trains and pedestrian laden streets.”

“After our brief visit [to the Louvre], we were desperately hungry […]. We went to a nice cafe called Cafe Joli and I had a fantastic Croque Monsieur. I was in heaven after eating that.”

“I can only wonder how the Mona Lisa feels. Launching into the spotlight is difficult for anyone, but she didn’t ask for this. Why, of all da Vinci’s breathtaking works, why her? Why this piece? Bulletproof glass, a wooden rail, two bodyguards, and a fabric rope barring the spectators from getting too close. She sees thousands of people a day, and I can only imagine she’s lonely on her private wall. I wonder if she feels guilty about drawing people away from the other pieces in the room, either by sucking the public in like a fly to her web, or repelling visitors completely from the room as a whole to avoid the buzz in the middle.”

Wishing you all the best from Paris,