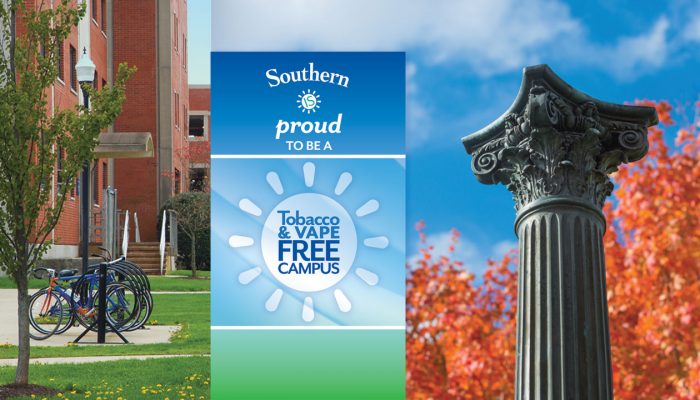 The state Department of Public Health has awarded Southern a grant for $235,496 to enhance its leadership role in snuffing out campus tobacco use and to encourage its students to kick the habit.

The grant comes a year after SCSU became a tobacco-free campus, which means tobacco use in all its forms – as well as the use of e-cigarettes – are prohibited on all campus property. Southern was the first public university in Connecticut to make that transformation.

The grant will enable the university to:

*Train students to become tobacco-free “ambassadors,” who will help connect tobacco users to services that can help them quit. A part-time, tobacco-use cessation coordinator will be hired to oversee this program, as well as assist with other cessation programs.

*Provide technical assistance and training to other Connecticut public universities that are interested in becoming tobacco-free.

*Expand tobacco-cessation services on campus. Counseling and nicotine replacement medications will be among the services offered.

“Southern is proud to be the first public university in Connecticut to go tobacco-free, and this grant will allow us to collaborate with our sister schools to improve the health and safety of more students,” said Emily Rosenthal, coordinator of the SCSU Wellness Center.

“We are happy with the improvements on campus since we implemented the policy a year ago,” she said “But we also are seeing some positive results in our students’ tobacco-use off-campus, as well.”

Rosenthal said the percentage of male students who identified themselves as casual smokers (any use within 10 days of taking the survey) dropped from 26 percent in 2014 to 17 percent in 2016. Casual female smokers dipped from 14 to 13 percent during that same period.

“We also found that before we came a tobacco-free campus, Southern was slightly above the national average in terms of the percentage of our students who were regular smokers,” Rosenthal said. “But now we are slightly below average. We still have work to do, but we are headed in the right direction, and I have to believe becoming a tobacco-free campus is helping encourage tobacco users to quit.”

Dr. Diane Morgenthaler, SCSU director of health and wellness, agreed. “Southern has made great strides in moving forward our tobacco-free campus initiative over the past year. We look forward to continuing the progress. This grant will help us accomplish that goal.”

Social Justice Community Awards Given for 2018-19