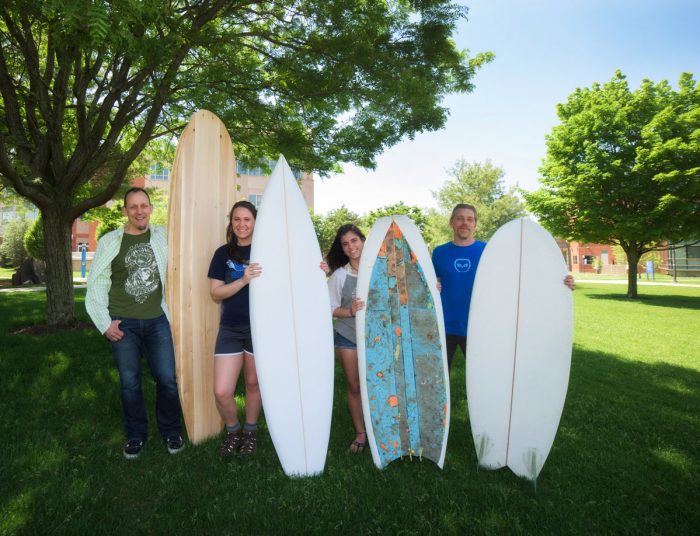 The surfboard is such a part of American popular culture it is almost folkloric. Think “Surfin’ Safari,” The Beach Boys, “Beach Blanket Bingo,” Gidget, and, more recently, “Lilo and Stitch” and “Blue Crush.” Surfing has been romanticized in the American imagination for generations, but how much do any of us really know about the sport or the surfboard itself?

This spring semester, in an Honors College course entitled “Material and Meaning: Economic Geography and Sculpture,” students built their own surfboards from scratch. In doing so, they learned more about surfboards than most of us will ever know: what goes into the production of these manufactured objects or commodities; the production process’ impact on the environment and on workers; and cultural meanings of the object. The class visited beaches and studied wave dynamics to learn how they can affect the way a board surfs. They created a life cycle analysis of their boards, the purpose of which, student Hope Finch explains, “is to quantify a product’s impact on the environment, seek out potential improvements, and to clearly articulate the process through which a product is made.”

And in the end – they had surfboards!

Team taught by Patrick Heidkamp, associate professor of geography, and Jeff Slomba, professor of art, “Material and Meaning” is a hands-on practical learning experience that engages students on many levels. Heidkamp and Slomba decided to use surfboards as the object students would make in the course after encountering research about surfboards at a conference. The course’s goal is for students to create an object that teaches them about commodity chain analysis, or how to examine the process by which companies gather resources, transform them into goods or commodities, and distribute them to consumers. Heidkamp is a longtime surfer and Slomba a paddleboarder, so they also thought the finished products in the course would end up being fun for students. As Heidkamp says, “We hoped we might be able to approximate something that actually works.” The class was divided into small groups, each of which was assigned a particular kind of surfboard to study and build. One board was to be made of sustainably-grown wood; another of expanded polystyrene foam (EPS), which is slightly better for the environment than other similar types of foam; and another of materials found on beaches, such as chunks of old foam buoys and docks that had washed up onto the shore. Slomba says these reclaimed materials had “living things inside them” — ants, ticks and other insects –when they were collected, and the creatures remained inside the materials while the students worked on their board. The proposed boards represented different levels of sustainability, says Heidkamp.

Before actually tackling the job of making the boards, students researched the materials they would be using, interviewing manufacturers and other companies that supplied them with the components of the boards. They traced the commodity chain, learned about the history of surfing and its cultural origins, and made demo boards — scale models of the full-size boards they would eventually create. In the process, they also learned how to use the tools that were necessary to build their boards, creating empathy for workers who build boards for a living. Student Emma Knauerhase, whose group built the board of reclaimed materials, says, “The most import thing I learned from this project was how to be innovative . . . we were able to do anything we wanted with our surfboard! My group was able to create the surfboard from recycled material and shape it ourselves! Whereas other groups had guidelines to follow, we did not.”

Ultimately, the iconic surfboard came to represent much more to the students than a prop from a Beach Boys song. As Hope Finch says, after taking the course, she “can no longer think of the products you use everyday in the same way. When I look at my board I understand its potential to be detrimental to marine life, I am reminded of the chemicals embedded in the foam and the harm they pose to factory workers in foreign countries, and I am aware of the pollution created in order to ship and deliver the materials to Southern. The surfboard becomes so much more. The surfboard represents the countless repetitive shaping maneuvers needed to form the rails, it represents a fear of tools overcome, and ultimately it’s a physical manifestation of a deep respect for Surf Culture and those that work to keep its roots alive.”