Swimmer with Autism Determined to Compete 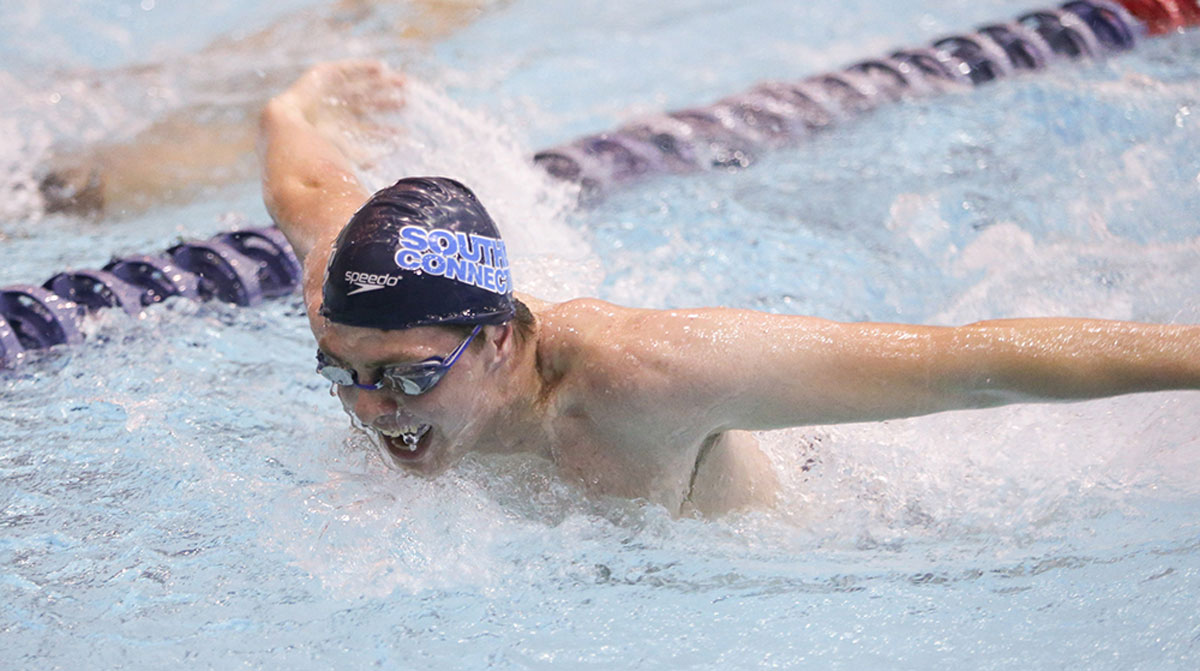 Sophomore Tyler Steskla of the Southern Connecticut State University men’s swimming and diving team is accustomed to dealing with adversity. At the same time, he is also well versed in the elements of perseverance and accomplishing goals.

He was all set to enter the pool and be a key contributor for the Owls’ in the pool last fall. Unfortunately, he was deemed ineligible by the NCAA to compete following a review of his high school coursework. Rather, he was able to practice with the team but could not compete in regular or post-season meets.

Part of the reason why he is able to shake off obstacles is the fact that he has overcome plenty of roadblocks since being diagnosed with autism at age 3. Tyler’s story was recently featured on NBC Connecticut and received national publicity as well across the NBC broadcasting platform.

“People that have this diagnosis know that it’s not easy for them, and they want to accomplish more than people think that they can,” Steskla said.

Accomplishing more has always been a part of Steskla’s nature. In the pool, he was an Age Group champion and Nationals qualifier as a part of the Cheshire Sea Dogs swim club. That prowess caught the eye of Owls’ coach Tim Quill. Steskla joined the program for the fall 2014 semester.

After receiving the unfortunate news from the NCAA, Steskla did what he always does – overcome the roadblock. He had a grade point average in excess of 3.0 in the spring of 2015.

“Personally, I was really worried about him because I know how passionate he was about it (swimming),” Quill said. “He was devastated, but instead what he did was embrace the situation, pull a 3.0 (grade point average) last semester.”

A Cheshire native, Steskla was one of the Owls’ stars of this year’s Northeast-10 Conference Championship, which took place in Worcester, Mass., in early February. He had three top-14 finishes, including a fourth place finish in the 1,650 yard freestyle – the equivalent of a mile swim. Southern Connecticut won its sixth straight NE-10 title and 14th in the last 15 years.

“He’s just a great example of that when you set your mind to something, anything’s possible,” Quill said. “People would look at Tyler in that he has a disability in some regards, but I look at it more as a strength.”

Watch the video about Steskla on NBC Connecticut

Previous articleMFA Grad’s Poems to Share a Bill with Wallace Stevens
Next articleAnd the Winner is . . . A Southern Graduate
RELATED ARTICLES
Community Connections