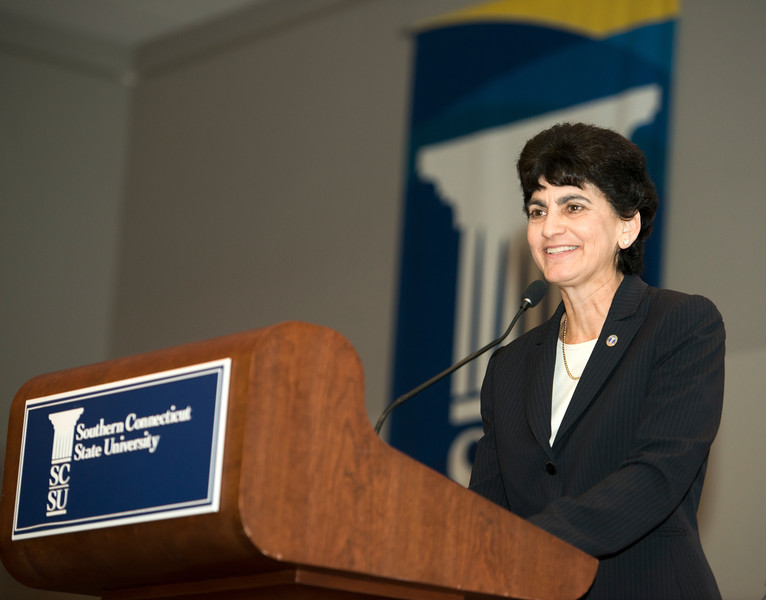 The Connecticut Women’s Hall of Fame, hosted on Southern’s campus, is an educational outreach organization whose mission is to honor publicly the achievement of Connecticut women, preserve their stories, educate the public and inspire the continued achievements of women and girls. Founded in Hartford in 1994, the Hall fills the void that traditional curricula still fail to address and, today, stands as the state’s premier source for Connecticut women’s history with more than a hundred Inductees. These women’s lives and accomplishments are celebrated and documented through a wide spectrum of innovative statewide programs offered free of charge to Connecticut citizens.

In 2008, the Hall formed a partnership with the university and moved to its campus. This collaboration allows the Hall to work closely with the SCSU Women’s Studies Program and Women’s Center, as it partners with many New Haven area organizations while maintaining its existing statewide relationships.

At the induction ceremony, among the honored guests were Governor Dannel P. Malloy and New Haven Mayor Toni Harp (pictured above with President Papazian). President Papazian delivered the closing remarks, which follow:

Congratulations to the Hall of Fame and its staff on staging a memorable event this evening.

And let’s have one final round of applause for the group of remarkable women that have been honored at this induction ceremony.

Leaders in technology, public relations, and landscape architecture, our three inductees are a testament to the strength of women’s empowerment and education.

And their individual legacies of achievement will continue to make a profound difference for years to come.

Southern Connecticut State University is proud to host the Connecticut Women’s Hall of Fame – an educational outreach organization that honors the accomplishments of outstanding Connecticut women, and in doing so inspires new generations of young women and girls to follow in their footsteps.

At Southern, our task as an institution of higher learning complements the efforts of the Hall of Fame…
…as we provide opportunities for young women – and young men – to further themselves educationally, inspire them to achieve, and encourage them to work within the social and political arenas to see that all are given a fair chance.

One of our latest areas of growth is in the STEM disciplines – fields in which women have traditionally been underrepresented.

Despite the existence of Title IX legislation, it’s a fact that women still lag behind men in earning doctoral and professional degrees, particularly in nontraditional disciplines like math and science.

Women have earned only about 20 percent of the doctorates in computer science, engineering and physics, which means that they are not involved in large numbers in the emerging computer science fields.

In fact, not too long ago, it was widely held that girls didn’t like math and science and therefore couldn’t possibly be good at those subjects.

Girls were sometimes steered away from higher-level classes in the sciences, and discouraged from joining math and science clubs.

And at Southern, we educate future female scientists and engineers, along with teachers, nurses, businesswomen, journalists, artists, doctors, and individuals in scores of other occupations.

In recent years, our enrollment in STEM courses has grown by more than 20 percent as we develop new programs in workforce-demand fields such as applied physics, chemistry and nanotechnology.

As you may know, next spring we will open a $49-million academic and laboratory science building, which will provide myriad new opportunities for student learning and research.

It will include a supercomputing lab, a saltwater aquaria room, an analytics lab for testing levels of mercury and other contaminants and the state’s first center dedicated to the cutting-edge field of nanotechnology.

We plan to use the new building as a launching pad to build new community partnerships and establish Southern as a regional leader in the sciences.

Our new Dean of the School of Education, Stephen Hegedus, is an innovative leader in STEM education and curricular development.

And Christine Broadbridge, one of Connecticut’s leading researchers in the fields of nanotechnology and materials science, is our new director of STEM initiatives.

You may recall that she was an academic honoree at this event – celebrating women’s achievements in science – back in 2008.

In her new role, Christine will be developing new programs on campus and building partnerships with governmental, business and other academic organizations.

These ventures are important, as it is critical that our academic programming evolves apace with the new demands of our economy.

For we all know that as the economy becomes more technology- and knowledge-based, the level of education that people will need will inevitably rise as a result.

And so the workforce we must develop now must by necessity be creative, innovative, entrepreneurial and able to learn and imagine.

At Southern, we look to build on these opportunities, partnering with the Connecticut Women’s Hall of Fame to ensure that all young women realize their full potential and join the ranks of those we have honored here this evening.