John and Nina Caragianis firmly believed in the transformative power of education. Their daughter — now a celebrated Southern professor and administrator — has established a memorial fund that extends her parents’ legacy by helping Southern students.

When Christine Caragianis Broadbridge was deciding on a college major, it was her father who nudged her toward the sciences — still an unconventional path for a woman in the mid 1980s.
“He said, ‘Pick the most challenging thing you can think of, and I’ll be there for you,’” Broadbridge recalls. “So I picked electrical engineering and physics.”

Broadbridge’s initial exposure to technology came from watching her father repair jukeboxes and pinball machines at the family’s vending machine business. She is a first-generation college student, but earning a university degree was always a given. “My mother and I talked about college every day,” says Broadbridge, who went on to graduate first in her class at the University of Rhode Island (URI), where she was one of a few women engineering majors.

A master’s degree and doctorate from the esteemed Brown University of Providence, R.I., followed. “I had my child by this time,” says Broadbridge, “and my parents were so supportive and proud that I was able to earn my doctorate while starting a family.”

In 1993 — at age 26 — Broadbridge became the first female engineering professor at Hartford’s Trinity College. Today, she remains a tireless advocate for higher education at Southern, where she’s a physics professor, researcher, and the executive director of research and innovation — as well as a Yale Visiting Fellow.

Broadbridge is also a leader in the groundbreaking field of materials science, which studies the properties of materials like metals, glass, semiconductors, composites, and plastic. Her research focus is nanotechnology — the manipulation of matter at an atomic level — an emerging discipline scientists say has the potential to revolutionize everything from healthcare to alternative energy. As the founding director of the Connecticut State Colleges and Universities Center for Nanotechnology at Southern, Broadbridge has helped launch countless students’ careers in the field.

Her commitment to these future scientists echoes her parents. Both cheered her on throughout her career, helping with college expenses so she could travel for research and training opportunities. “Education was so important to my parents,” she says. “It was something they stressed to me from a very young age.”

In 2018, Broadbridge and her husband William, who works in the high-tech electronics industry, established the John and Nina Caragianis Research and Innovation Endowed Fund at Southern. The gift continues the couples’ long-held commitment to education while honoring their memory. John Caragianis passed away in 2006; his wife, Nina, died in November at age 85.

The fund benefits undergraduate or graduate students at Southern with at least a 3.0 GPA who are enrolled in a STEM (science, technology, engineering, and mathematics) or STEM-related field. The money can be used for books, supplies, travel, conference fees, software — or any academic endeavor that would enhance a student’s education or interest in research and innovation. Preference is given to first-generation college students.

“There are huge opportunities at Southern, and it’s really about encouraging students to seek them out, just like I did as a student,” says Broadbridge. She remembers her father taking her on trips to the bookstore at nearby Brown University, inspiring her to pursue a research opportunity at the Ivy League campus while still a senior at URI. “He always encouraged me to think about what I could do to expand my horizons,” she says. That early work — a partnership between Brown’s engineering department and Rhode Island’s jewelry industry — helped plant the seeds for her future research.

When establishing the fund at Southern, Broadbridge focused on STEM students not only because that’s where her passions lie, but as a nod to her father’s deep interest in science and technology. A self-taught businessman who ran a successful Newport, R.I., vending machine company — Newport Music/Automatic Vending Service — Caragianis chose the Navy over college. But he never stopped learning, says Broadbridge.

“As he got older, he wanted to learn everything he could about technology,” she says. Broadbridge recalls her father devouring science magazines and clipping articles he thought she’d find interesting or relevant to her work. “He was the one who started sending me articles about nanotechnology, way back before it was a hot field,” she recalls.

John and Nina instilled that same love of learning in their three children and eight grandchildren, says Broadbridge, who has a daughter, 22, and a son, 26, who graduated from Southern with a master’s in science education.

“The kids are getting older, but they still talk about my parents and their message,” Broadbridge says of her extended family. “That message was very consistent for everyone they knew: Look for opportunities, work hard, and we will be there to provide encouragement and support.”

Broadbridge says she chose to establish the fund at Southern for the same reason she joined the faculty: She believes strongly in the university’s mission and diversity, and the power of public education to transform lives.

Her life’s work has focused on projects that encourage young people in underrepresented populations — including women and minorities — to consider careers in the STEM fields. At Trinity, she started a program that paired Hartford high school students with research opportunities at aerospace giant United Technologies Corporation. It was highly successful, with 100 percent of participants going on to college, Broadbridge says.

While at Southern, she helped found the National Science Foundation-funded Center for Research on Interface Structures and Phenomena (CRISP) at Yale and Southern. As the center’s education director and a senior researcher, part of her role is helping high school science teachers inspire new generations of STEM students.

Broadbridge says her parents would be proud to know their commitment to education will live on at Southern through an endowed fund established in their memory. “I think they would be happy that I’ve chosen to do something that celebrates their legacy by inspiring and supporting the next generation of researchers and innovators,” she says. 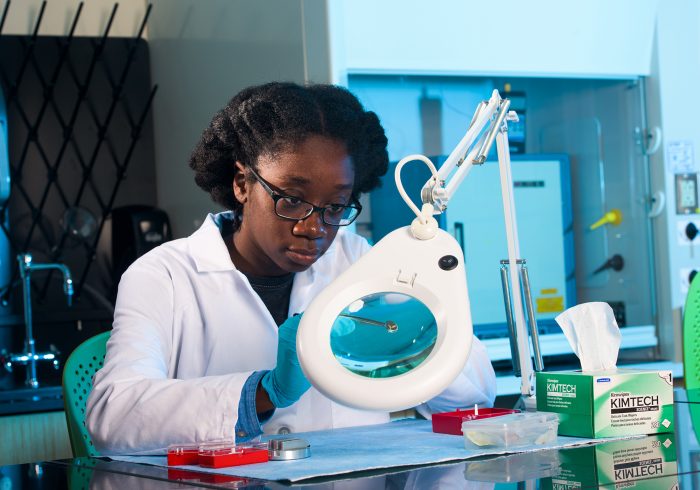