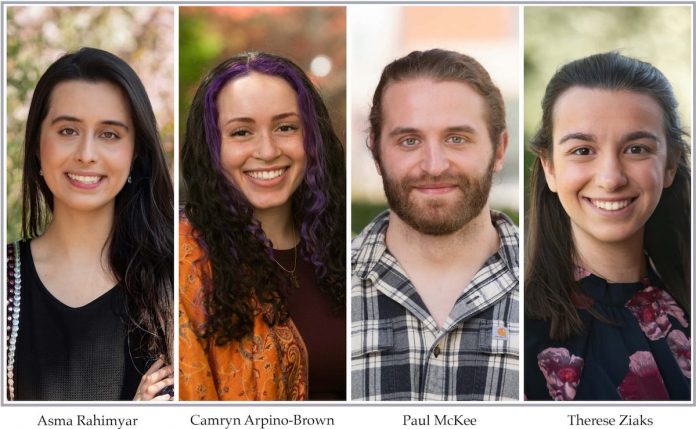 Four outstanding students – including a Rhodes Scholar and a Marine Corps veteran who is a member of the Mensa Honors Society – comprise this year’s Southern contingent of Henry Barnard Distinguished Student Award winners.

Each year, 12 seniors are chosen by the four Connecticut State Universities – four each from Southern and Central, and two each from Eastern and Western. It is considered among the university’s most prestigious student awards. Criteria include a 3.7 GPA or better and having demonstrated significant participation in university and/or community life.

Asma Rahimyar, a double major in political science and philosophy, has a GPA of 4.0. She plans to pursue masters’ degrees in global governance and diplomacy, and in refugee and forced migration studies, while attending Oxford University this fall as a Rhodes Scholar.

Rahimyar has been active on campus, serving as president of the Muslim Student Association, SCSU’s Circle of the Omicron Delta Kappa National Leadership Honors Society and the university’s chapter of the National Political Science Honors Society. She also is a representative on the Student Government Association and is a tutor with the Academic Success Center.

She has won a series of prestigious awards and scholarships. In addition to becoming Southern’s first Rhodes Scholar, and the university’s first recipient of the Harry S. Truman Scholarship, she has earned the SCSU Provost’s Award for Excellence in Research.

“Asma is several powers of 10 better than all of the impressive students I have nominated (in the past),” said Patricia Olney, professor of political science. “…(She) is driven by a passion to advocate for the rights of others at the highest level, headed to Oxford to obtain two advanced degrees in international relations specialties, and bent on eventually obtaining a law degree and Ph.D. so she can further the human rights causes internationally and advocate for the rights of refugees and immigrants. She feels strongly about using her gift for writing to capture the attention of large enough audiences to effect change.”

Paul McKee, a psychology major, has a near-perfect GPA of 3.97. He plans to pursue a Ph.D. in cognitive neuroscience.

A Marine Corp veteran, McKee is a veteran transition specialist for Southern’s Veterans Office, where he assists veterans transitioning to the university. He also had served as a peer academic leader and was active in the Veterans Empowering Teens Through Support community organization.

He earned several university research awards, and an honorary undergraduate scholar award from the New England Psychological Association. But he also has established the first student-funded endowment scholarship ($25,000) at Southern to foster rigorous interdisciplinary work between the data science program and the Psychology Department.

“He is an inducted Mensa, Psi Chi, and Golden Key Honors society member,” said Christopher Budnick, assistant chair of the Psychology Department. “…Paul has the strongest research record and potential of any undergraduate (or graduate) student I have worked with thus far, and far exceeds expectations.”

Camryn Arpino-Brown, a psychology major, has a GPA of 3.72. She plans to join AmeriCorps upon graduation.

Arpino-Brown has been a representative with the Student Government Association. She serves as diversity coordinator at the Multicultural Center and is a resident advisor at the Office of Residence Life. She also is a former orientation ambassador and coordinator.

She had served as secretary of both the N.A.A.C.P. and of Sisters in School Together Achieving Success (S.I.S.T.A.S.).

“There are empathetic powers that can’t be taught and yet are fundamental to psychology, literature and other fields, as well as our daily interactions with others,” said Jeff Mock, professor of English. “Ms. Brown was such a student in my courses, and I see those empathetic powers at work in her other roles on campus. She led a Black Lives Matter rally. As the diversity coordinator for the Multicultural Center, she worked closely with diversity peer educators to help plan events and guest speakers and share in endeavors greater than oneself.”

Therese Ziaks, a chemistry major in the B.S. to M.S. accelerated pathway that is designed for academically strong and research-oriented students, has an almost perfect GPA of 3.97.

Ziaks is a member of the Honors College. She is an undergraduate research assistant in the Chemistry Department, member of the Psi Chi International Honor Society in Psychology, and is founder and president of the Gamma Sigma Epsilon Chemistry Honors Society. She also is a student worker in the Office of the President, and is a peer academic leader for organic chemistry in the Academic Success Center.

She was named the American Chemical Society Division of Organic Chemistry’s Outstanding Senior Organic Chemistry Student award earlier this year. She also has been a student guest speaker at Words of Wisdom Wednesday and the STEM Goes Red event, and served as a student representative for search committees for an associate vice president for student affairs and for director of advising.

“As a natural leader, Therese possesses excellent interpersonal skills,” said President Joe Bertolino. “She’s a strong communicator with unparalleled determination and a superb work ethic. As a pre-med student at Southern, she has successfully juggled high standards of academia along with work responsibilities and community involvement…I can’t speak highly enough about Therese. She is passionate about helping people, is smart on her feet, highly professional, and is an extraordinary representative for the field of STEM.”