News at Southern
HomeFacultySouthern's Observatory: To See It Is to Believe It
FacultyFeaturedOn CampusSchool of Arts and Sciences

Southern’s Observatory: To See It Is to Believe It 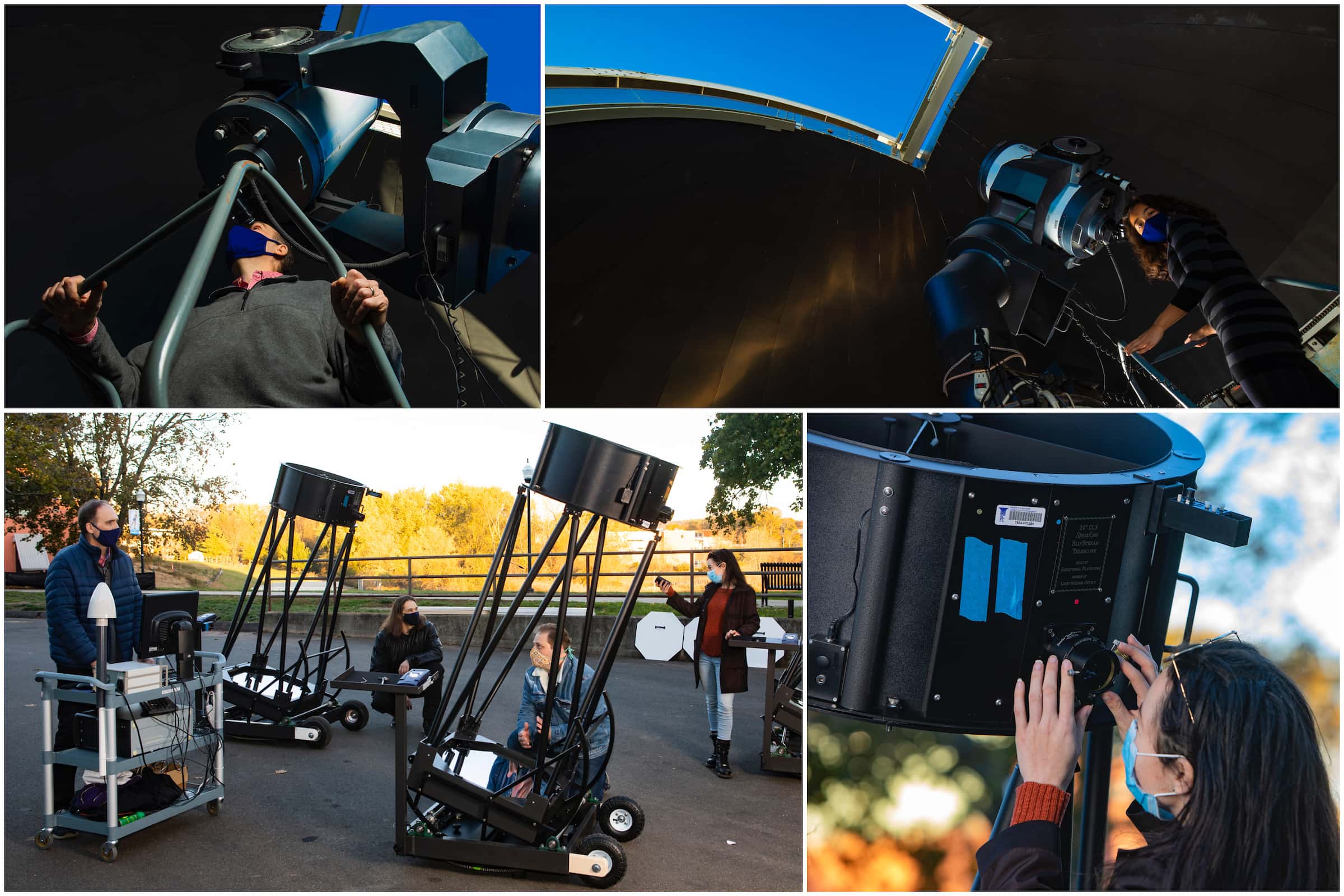 It is easy to take the night sky in Connecticut for granted, especially when some of its finer elements are obscured by air and light pollution and they are the same things we’ve been looking at for years (the moon, Orion’s belt, the occasional shooting star, the faint reddish glow of Mars). But Professor of Physics Elliott Horch, aka “Southern’s astro-physics powerhouse,” says viewing the sky from Southern Connecticut State University’s observatory on Morrill Hall is both literally and figuratively eye-opening.

“When you take that telescope and look at the moon,” Horch says, “you can see craters and mountains in exquisite detail. When you look at Jupiter, you can see all the cloud bands and the four biggest moons, the Galilean moons [Io, Europa, Ganymede, and Callisto], and they look like twinkling stars to the left and right of the cloud bands. You can even see the rings on Saturn. They’re spectacular. Incorporating that experience into the class is the first step between the collaboration between physics and Earth Science.”

The observatory structure, which dates back to the 1950s, reflects Southern’s early commitment to astronomy near the beginning of the “race-to-space,” according to Eric Anderson, Southern’s physics lab technician. Indeed, the first U.S. sighting of Sputnik – the prototype satellite launched into space by the Soviets on Oct. 4, 1957 – was by Southern astronomer Robert Brown atop nearby Engleman Hall six days later.

The observatory’s telescope is ripe for potential use for by students, would-be astronomer and faculty purposes, Anderson says. Best yet, the optics technology has not degraded.

“It is kind of like a classic instrument,” Horch says. “But we’d like to continue on improvements.”

For example, one aspect of Horch’s work is building cameras for big telescopes, but “a small telescope on campus gives us a quick way to try out ideas for new cameras and get some test data before we move to large telescopes,” he says. “One way in particular that we would like to do that is in developing cameras that remove the turbulence in the atmosphere and give a much sharper image.

“I think there is a real opportunity to use the campus observatory as a testbed facility for new ideas on how to obtain the highest resolution images we can get in astronomy, then take those ideas to big telescopes for some hopefully spectacular results,” he says.

Horch, who developed a super-powered device for telescopes that enabled astronomers to capture images of celestial objects many times clearer than had ever been taken and was even tapped by NASA to assist with the Kepler Mission, teaches Principles of Astronomy. He currently brings groups of two to three students into the observatory, but says plans are in the works to share the view with a wider audience.

“We want to restart a robust program of inviting people in the community to see these things and to use the observatory as a community outreach vehicle and research asset,” he says. He credits retired Earth Science astronomer James Fullmer with initiating this outreach.

According to Anderson, renovations to the utilities are currently being negotiated, as well as corrective measures to electrical and drainage issues.

“Eric was really the person who got the university’s utilities staff to see the potential of it,” Horch says. “Now, as they say, the sky’s the limit.”