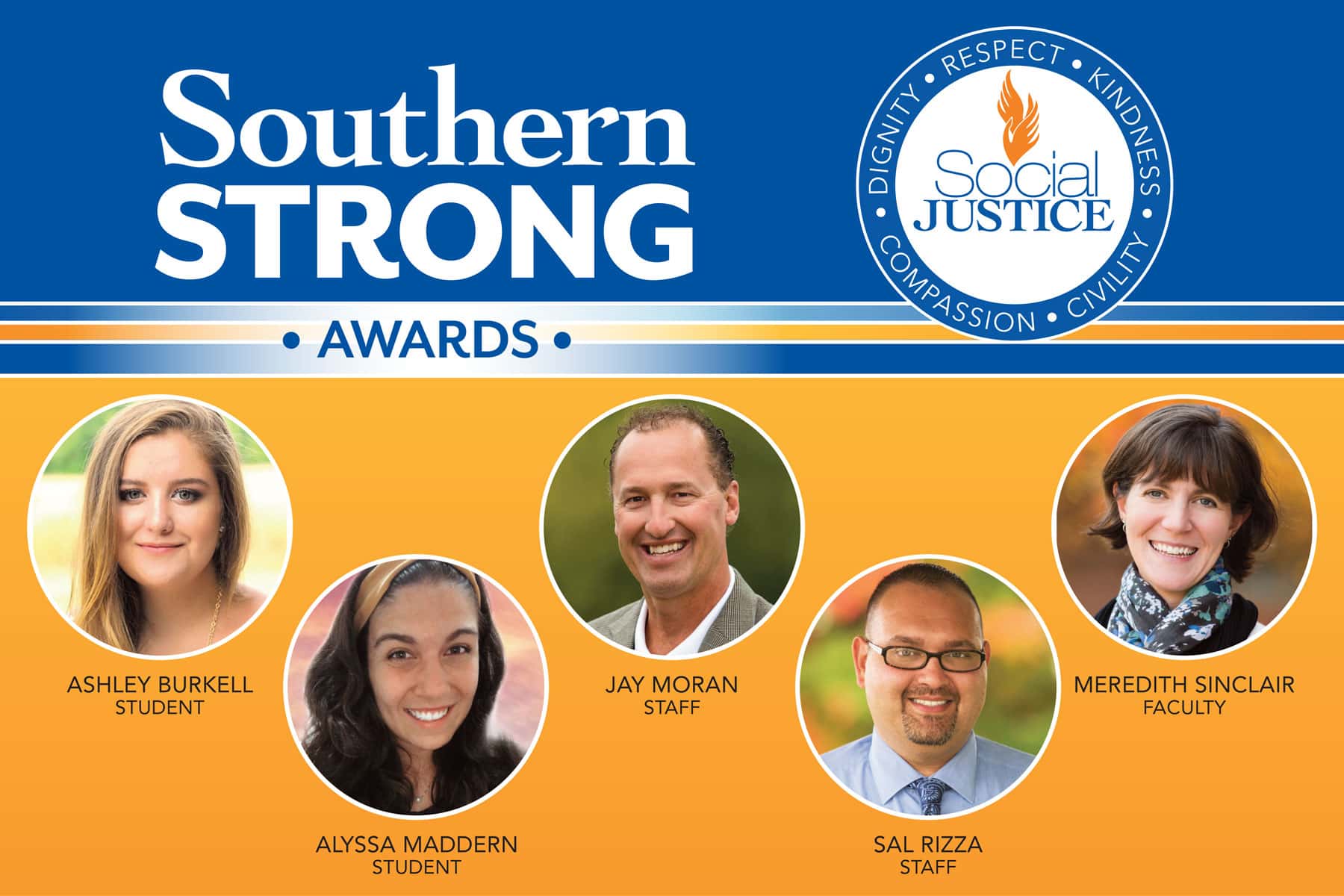 The SCSU President’s Recognition Committee proudly presents our tenth group of SouthernStrong awardees. These awards shine a light on faculty, staff, and students who are lending a helping hand, with acts of kindness large and small, not only for their fellow Owls, but also for friends, neighbors, and strangers.

We recognize and celebrate Ashley Burkell, Alyssa Maddern, Jay Moran, Sal Rizza, and Meredith Sinclair for their commitment to making a difference and stepping up during the pandemic crisis. Their acts of kindness are making a positive impact during this difficult time.

Do you know an unsung hero who’s been making a difference during the pandemic? Please nominate them so their kindness can be celebrated!

Nominated by a faculty member, Ashley Burkell is a public health major, and her nominator wrote that “each year she strives to do more to promote equity.” Burkell recently emailed her nominator, who is also her advisor, to tell her that learning about privilege freshman year had led her to understand how she needs to help others with less privilege. While educating herself on social media and attending recent protests, she still didn’t feel it was enough. On a recent weekend, Burkell decided to use her week’s grocery money to make vegan pasta and garlic bread and sell it in her neighborhood (with contact-free pickup) to support Black Lives Matter Global Network. In fewer than three days, she had already raised $1100. Her nominator reports that Burkell intends to repeat this drive in July with a local social justice/equity group as the recipient. Burkell, her nominator wrote, even included instructions for safely warming the food, to avoid food-borne illness. Burkell, she wrote, “is using all she has learned in her public health and nutrition classes to help promote health equity.”

Alyssa Maddern
Nominated by a faculty member, Alyssa Maddern is a full-time student who completed her undergraduate degree in recreation & leisure (concentration: therapeutic recreation) and is continuing her education for her master’s at Southern in recreation therapy. She was hired in February as a part time activities assistant at Maplewood Senior Living at Orange (MAO); however, amidst the pandemic, she has been working more and has been given more responsibilities and challenges to overcome. Due to this pandemic, her nominator wrote, Maddern “has been able to prove herself and her expansive abilities through creating innovative activities for her residents. Those activities include developing and distributing a daily BINGO newsletter to play together, but apart from others, a Workout From Your Apartment packet that shows her residents how many repetitions of an exercise they should do, a detailed explanation of how to do the specific exercise, and a hand drawn cartoon figure, properly doing the exercise, a Fun Brain Fitness Packet she creates for each and every Friday that includes themed sudoku, word searches, crosswords, anagrams, hidden pictures, etc. She has also provided Happiest of Hours to her residents’ apartments, facilitates 1:1 Hallway Exercises, developed and distributes a TV Guide for her residents to follow and tune in to entertaining movies and shows Thursday through Sunday, rolls around a cooler as the ice cream woman and distributes a variety of ice cream to her residents, developed and collaborated with her residents to create a ‘We Are All In This Together’ banner, and the list continues on.”

For all of her efforts, Maddern was recently awarded the H.E.A.R.T Award for the month of May at MAO; H.E.A.R.T. is the philosophy MAO associates embody in their work performance, going above and beyond with all their heart. H.E.A.R.T stands for Humor, Empathy, Anatomy, Respect and Reaching Out to Others, and Trust and Triumph. Her nominator wrote that “Each and everyday Alyssa brightens the lives of older adults who have been separated from family and friends during this epidemic! She is truly a hero!!”

Nominated by a colleague, Southern’s Director of Athletics Jay Moran has led his staff, coaches, and teams — comprised of approximately 500 student-athletes — through, at his own admittance, his most challenging year as an athletic director. The department was faced with the EEE scare in the fall, which Moran addressed, and through coordination with his staff managed to avoid canceling any athletic competition or practice. Shortly thereafter, Moran’s nominator wrote, “the athletic department and gymnastics program, to say nothing of the entire SCSU community, was struck with the tragic loss of [student gymnast] Melanie Coleman. Jay has dealt with personal tragedy of his own, and never backed away from lending a helping hand and the needed patience to anyone that needed to talk.”

Moran then oversaw a midseason coaching change and was later confronted with the coronavirus pandemic. His nominator wrote that “he has been at the forefront of coordinating efforts for the entire Athletic Department in lending support to its student-athletes, and has worked tirelessly with the message being the same along the way: we have to get our student-athletes safely back on campus and get our fall student-athletes a season. Jay’s style of leadership ensures inspiration to his staff and coaches and presents himself as personable and approachable to student-athletes, as they are always first in line for his attention.”

Nominated by a student, Sal Rizza, director of Orientation, Transition and Family Engagement, was described as having “contributed numerous outreaches and important knowledge to Southern students and people in general during this hard time for people fighting for a change in systemic racism. He has been a shoulder to cry on, person to reach out to, and an educator to fight for this change and make it possible for others to fight too.”

His nominator added that he recommended Rizza because students look up to him. Rizza has been on Instagram lives with students “to send positivity and distractions from being in quarantine,” wrote his nominator. “He has tried to give students a positive place to go, in order to feel like they are at home on Southern’s campus. There were many Instagram lives and event schedules that he and his orientation crew put together that truly helped me and other students during this time.” Rizza is also a part of the Orientation Ambassador Alumni group on Facebook, and his nominator wrote that he is “always available to reach out to and support those who are suffering through the tragedies in the black and brown communities.” Rizza, his nominator wrote, has always supported students and lifted them up through hard times, but “he has just truly shined through during this time. He was an amazing boss when I worked as an orientation ambassador during my time at Southern and he is an even more amazing person inside and out. Students are very lucky to have him on Southern’s campus.”

Nominated by a student, Meredith Sinclair, associate professor of English education, is described as having always been a supportive professor: “As soon as we went online” when the pandemic caused campus to close in the spring semester, her nominator wrote, “she assured us that our mental health was the first priority, and she adjusted our class to meet the needs of the students. Her biweekly TEAMS chats provided a place not only to discuss class content, but to express how we are feeling during these times.”

Sinclair taught an engaging class not just on the methods of teaching, but on unlearning racist biases in order to become better teachers, her nominator wrote. Sinclair is a member of the Educational Justice Collective at Southern as well and has reached out to the group to arrange discussions on teacher activism. Since the semester has ended, Professor Sinclair has continued to show her support for the Southern community by voicing her support for the Black Lives Matter movement and the end to racial injustice, especially within education, and attending protests.