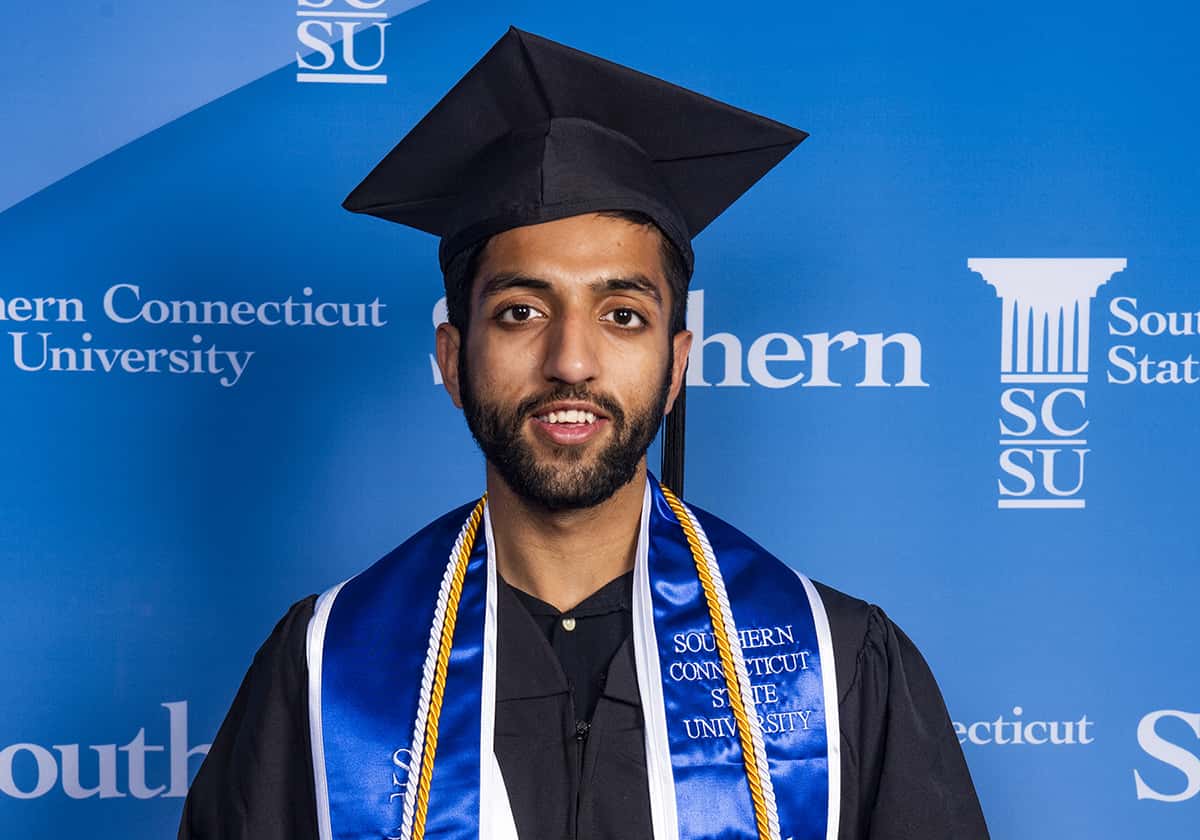 As a high schooler, Haroon Chaudhry saw college like this: You go to class, you graduate, and you are done.

Four years ago, Chaudhry was accepted to the track team at Southern Connecticut State University and enrolled on a full academic scholarship. Before starting his freshman year, he attended the Southern Educational Opportunity Program (SEOP) Summer Academy, which helps students ease their transition to Southern. The program helped — he got to know several people and the campus — but the first day of classes he didn’t see any of those people.

Fate stepped in when Chaudhry bumped into Dian Brown-Albert, coordinator of Multicultural Affairs.

Chaudhry always had been passionate about his Muslim heritage. Born in Pakistan, he was 13 when he and his family moved to America in 2009. He steadily had been conducting research on what it means to be Muslim in America and had even won a scholarship in high school for his research.

“That’s [joining MSA] where the transition happened for me,” he says. “I went from shy to most extroverted.”

At first, Chaudhry was just a member, but then, in his sophomore year he became president.

“Jumping in was completely unfamiliar,” he says. “I had to learn how to run an organization that at the time was a group of 30 to 40 people. I was just a sophomore and some of the members were juniors and seniors. I was nervous. But I had to learn.”

This is the point when Chaudhry amended his original philosophy of college, of thinking that it meant just going to class, graduating, and being done. This is when he realized that what he put into the experience greatly mattered — and that the experience could alter his destiny.

“I started doing speeches on campus about who Muslims are, what we do,” Chaudhry said. “People started seeing me, recognizing me, and I started becoming more extroverted, and speaking more in public. I was educating people of other faiths about what it means to be Muslim, and I started inviting other groups to collaborate.”

The momentum Chaudhry gained further spurred him on.

“Southern provided me everything,” he says. “My passion increased for the college, and I wanted to give something back, so I started to attend everything. I utilized everything that was available, and slowly, slowly, I started to get more recognition. It felt like, ‘Muslim people are stepping up.’ I started getting invitations to go to various classes and teach about Islam and how we celebrate various events.”

Chaudhry indeed was getting recognition. He was invited to become an orientation ambassador, welcoming incoming students to campus just as he himself had been welcomed. He was awarded the Social Justice Top Owl Award, recognized at National Student Athlete Day for cross country and track, and for the first time in history, the SCSU Muslim Student Association took part in the 12th annual IRIS 5k run for refugees.

Even with all his on-campus success, Chaudhry knew he had to challenge himself academically as well. As a major in Business Administration and Interdisciplinary Studies with a concentration in International Business, Communication, and Leadership Development, Chaudhry decided to test his newfound determination and to study abroad, choosing the EDHEC Business School in France.

“I felt it would put me apart from other students,” he says. “Everything changed when I studied abroad. I met so many people, and I went there with an open mind. I wanted to represent Southern to the best of my ability.” He did: While in France, Chaudhry ran a half-marathon in Marseilles, proudly wearing his Southern jersey.

When he came back to campus, he decided to “really” put himself out there, in a business sense. He created a LinkedIn profile and started touting his accomplishments.

“People started noticing me,” he says. “Someone from Amazon contacted me through LinkedIn. They’d seen all the articles written about me at Southern. They asked if I wanted to be a Brand Ambassador. I had to interview for it, and it was intense.”

“Amazon wanted me to go to Seattle for training, and they asked me to put a Southern t-shirt on. I said, ‘Yes, I’d love to.’”

Now an Amazon Brand Ambassador, Chaudhry’s popularity knows no limits. He receives free products from Amazon to give away throughout the campus, plus coupons for 20 percent off on books. He’s also a Student Ambassador for the School of Business, and a Brand Ambassador for GMR Marketing and Dyson companies.

This May, Chaudhry graduated with a 3.7 GPA — earned while working six jobs, simultaneously. He is the first in his family to receive dual degrees, both a bachelor of science and a bachelor of arts within four years. He is the 2018-19 recipient for the Student Affairs University Leadership Award. He was recognized by the University Access Program for his excellent GPA and was honored by Omicron Delta Kappa, the National Leadership Honor Society, for excellence in leadership and academics. Under his presidency, the Muslim Students Association received the 2018-19 Impact Award.

When Chaudhry speaks about Southern, it’s easy to see how much his outlook has changed from his arrival four years ago, when college seemed like nothing more than a simple checklist.

“I fell in love with Southern, and my goal was to make connections. All over campus.”

And, it seems, the world.

Previous articleFinancial Literacy Program Again Named One of Best in the Country
Next articleWelcoming the Class of 2023: A Photo Gallery
RELATED ARTICLES
Achievements