Film Follows Journey of Two Trans Siblings and their Family 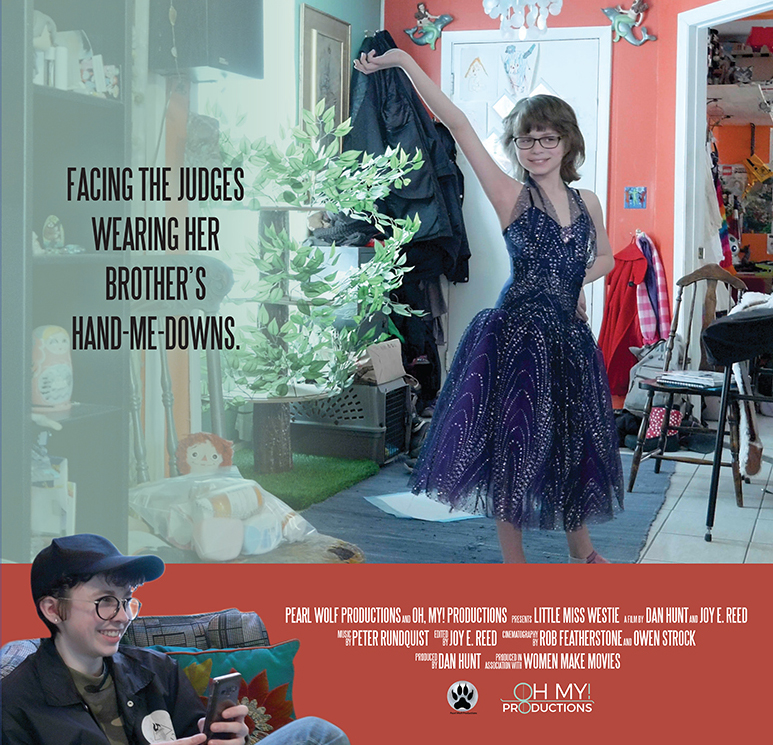 On November 15, English adjunct instructor Shelley Stoehr-McCarthy and her family will open up their lives to the university community when a documentary film, Little Miss Westie, is screened on campus. Stoehr-McCarthy, an MFA fiction writing student who teaches composition and won the university’s prestigious Outstanding Teacher Award last year, is the mother of two transgender teenagers, and the family’s journey over the past few years has been captured in Little Miss Westie. Stoehr-McCarthy’s husband and the teens’ father, Christian McCarthy, is a doctoral student in Southern’s Educational Leadership program. The film is named after an annual beauty pageant that takes place in West Haven, where the family lives. In the film, the McCarthys’ daughter, Ren, a trans girl, competes in the Little Miss Westie Pageant, and her older brother, Luca, a trans boy, coaches her on posing, make-up, and talent. Luca competed six years ago when he was living as a girl, so he’s an experienced adviser.

When Luca came out in 2015, Stoehr-McCarthy wrote an article about his transition, and someone who works with filmmaker Dan Hunt saw the article and connected him with Stoehr-McCarthy. Hunt, with over 25 years of filmmaking experience focusing on gender, sexuality, aging, and prison reform, teamed up with documentary filmmaker Joy E. Reed and they “just started filming” the family’s day-to-day life, Stoehr-McCarthy says. Filming began during Stoehr-McCarthy’s first year at Southern, in the fall of 2016. Hunt and Reed secured grant funding and became able to hire a crew, and the film crew “followed us around for a year,” says Stoehr-McCarthy. Eventually they began to figure out the “spine” of the story, which was the beauty pageant.

In West Haven, where the family lives, local girls are invited each spring to participate in the Little Miss Westie Pageant, held in the West Haven High School auditorium. The pageant, which usually draws about 40 participants each year, started as a fundraiser for Project Graduation, a post-graduation celebration provided for free to WHHS graduates in June.

“The 2016 presidential election changed our experience and then changed the film,” Stoehr-McCarthy says, explaining that “Trump’s election was devastating within the trans community.” A trio of groups In New Haven serves trans kids and their families, and people come from all over Connecticut to take part in these groups. Stoehr-McCarthy says that the groups’ coordinator reported that after the 2016 election, his phone line “turned into something like a suicide hotline,” as he talked to parents of trans kids to help them so that their kids weren’t terrified.

“No one knew if the federal government would suddenly turn around and say you couldn’t change your name and gender markers,” Stoehr-McCarthy says. “Everyone was trying to get documents changed as quickly as possible after the election.” The documents pertain to name-changing, Social Security, passports, and other materials related to personal identity. The family rushed to legally change the kids’ names and genders on their documents, a process that involved a court hearing. Dr. Adrian Demidont, a doctor in New Haven who specializes in the care of adolescent and adult trans- and gender-diverse individuals, ran a free document-changing clinic for trans kids in the period following the election.

Stoehr-McCarthy says that her family managed to get all their documents done by the end of 2016, “and our kids are now the same as cis children in terms of how they appear on paper.” The term “cis” refers to a person whose gender identity corresponds with the sex the person had or was identified as having at birth.

Luca, a senior at Common Ground High School in New Haven, is taking two courses at Southern in the English and political science departments and wants to be an art teacher. Ren is almost 13 and started this fall at a therapeutic school in New Haven. Both Luca and Ren have suffered with anxiety and depression. They attend the Yale Gender Program, staffed by a team of doctors and mental health professionals that provides family-centered care for children, teens, and young adults who are questioning their assigned gender and/or seeking gender-affirming consultation and treatment.

Stoehr-McCarthy started teaching as a GTA with English Professor Charles Baraw as her mentor. Both won the university’s Outstanding Teacher Award in 2018. Stoehr-McCarthy has had a couple of trans students in her classes, one of whom “was really struggling. I mentioned my kids, and this student was so happy I did. He wasn’t out yet and was a freshman and kind of scared.” She says her experience of Southern has been one of “an open, tolerant, accepting community.” The English Department, she says, has been “especially encouraging of faculty and students to be their best selves.”

English Professor Tim Parrish, director of the MFA Program, says that Stoehr-McCarthy is “the ideal MFA student and teaching colleague. She’s smart, incredibly dedicated, talented, caring, a great community member and team player, and really funny and warm. She’s also a consummate pro in whatever she chooses to do, and she’s also a great mother. We’re all lucky in the English Department to know her.”

The screening of Little Miss Westie will take place at 8 p.m. on November 15 in the Adanti Student Center Theater and will be followed by a Q&A with Stoehr-McCarthy and her family, along with filmmakers Hunt and Reed. The SAGE Center and Residence Life will host a pre-screening reception from 7-8 p.m. The event, which is free and open to the public, is part of Transgender Awareness Week and Social Justice Month.