Pettigrew in Bosnia: “Giving Up Is Not An Option” 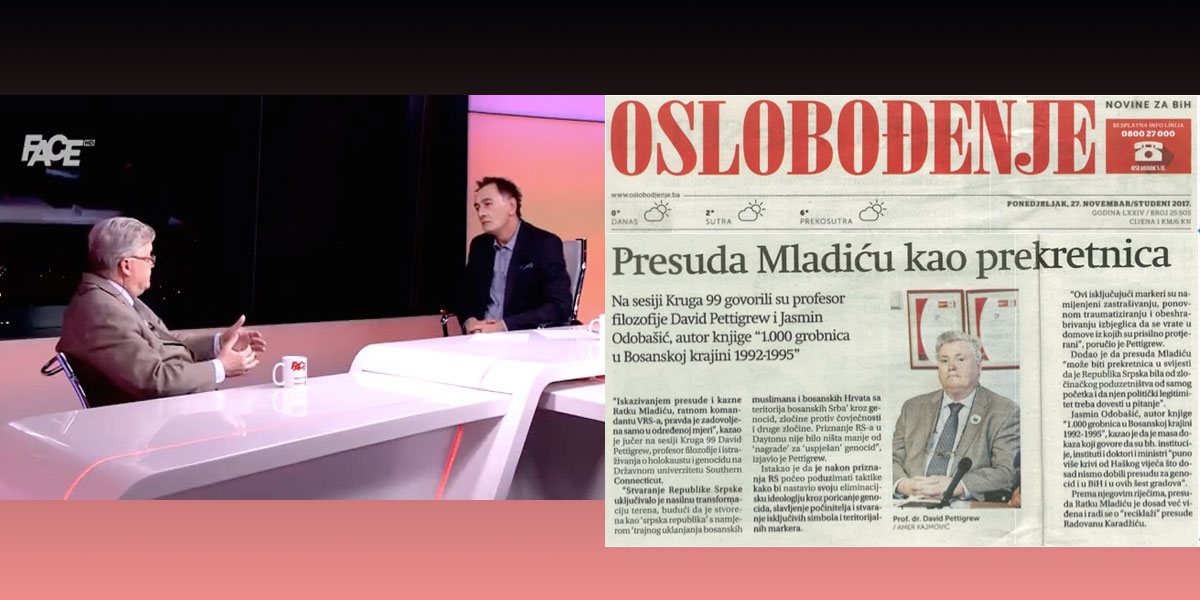 For more than a decade, Philosophy Professor David Pettigrew has been traveling to Bosnia to perform research, give lectures and interviews, and advocate for the victims of atrocities in Bosnia and Herzegovina. Bosnia and Herzegovina declared independence from Yugoslavia on March 1, 1992, triggering a secessionist bid by the country’s Serbs backed by the Yugoslavian capital, Belgrade, and a war that left about 100,000 dead, including the mass slaughter of many Bosnian Muslims by Serb forces. In addition, the crimes committed at the town of Srebrenica have been ruled to be genocide.

While all his efforts are part of a personal commitment to human rights and social justice, Pettigrew’s work on Bosnia also has an academic dimension, expressed through his lectures, publications, film screenings, and other work. He also teaches a holocaust and genocide studies course at Southern.

In late November, Pettigrew traveled to Bosnia to give two lectures in Sarajevo and an interview with the Federal News Agency (FENA) regarding the then-impending verdict in the Ratko Mladić case. The case concerned crimes Mladić committed during the Bosnian War in his role as a general in the Yugoslav People’s Army and the chief of staff of the Army of Republika Srpska. The verdict was delivered on November 22: Mladić was convicted of 10 of the 11 charges against him, including genocide, and sentenced to life imprisonment.

Following the verdict, Pettigrew was called upon for expert analysis, appearing on one of the most popular talk shows in the Balkans, seen by Bosnians around the world, and now with over 20,000 views on YouTube. Earlier this year, in July, Pettigrew was in Bosnia for about three weeks, during which time he gave lectures and interviews and engaged in activities around genocide recognition. He gave three lectures: one for KRUG 99, an association of independent intellectuals in Sarajevo; one for the International University of Sarajevo Summer Program; and one for the American University in Bosnia Summer Program. His lectures largely addressed obstacles to justice and reconciliation in Bosnia and Herzegovina. He also gave three interviews, two for television and one for an academic journal, Novi Muallim.

During the July trip, Pettigrew also met with representatives from the International Commission on Missing Persons, the United Nations Development Program, and the European Delegation in Sarajevo. He attended a book launch by a genocide survivor and met with a foreign affairs adviser to the Bosnian president. In Višegrad, he went to see the new 15-foot-tall Russian cross that had been erected in honor of the Russian volunteers who served (that is, “committed atrocities,” says Pettigrew) with the Bosnian Serbs. Pettigrew calls the cross “another example of the glorification of the perpetrators.” He traveled to Srebrenica in order to help receive 71 coffins of genocide victims who had been identified for burial this year. He was an invited guest at a commemoration ceremony on July 11 with genocide survivors and dignitaries from around the world.

Pettigrew was also able to visit a new museum, a permanent exhibition installed in February 2017 in the Potočari Memorial Center in Srebrenica. He was seeing the museum for the first time, after having edited all the texts in the exhibition, the first permanent comprehensive educational exhibition of the Srebrenica genocide. He also proposed the title for the exhibition: “Srebrenica Genocide: The Failure of the International Community.” Instead of the word “war,” he proposed “Serb aggression,” or “genocide.” Instead of “fighters,” he referred to the armed militias that defended the civilians of Srebrenica as “defenders.”

The language used to describe what happened in Srebrenica matters, Pettigrew says. Different groups use the words “war” and “genocide” to describe the same events. “My research has addressed the extent to which the rhetoric of the ‘90s has been in full operation since 2007,” he says, “with the glorification of war criminals, genocide denial, threats of secession, a referendum challenging the authority of the national court, and many other provocations attempting to prevent refugee return.” At the memorial service Pettigrew attended in the Srebrenica-Potočari Memorial Cemetery in July, people were burying their loved ones whose remains had been exhumed from mass graves and identified for burial. At one point, after Pettigrew had helped one family bury a loved one’s remains, a man stopped him and said “I know who you are and what you are doing, and I want to thank you for everything you are doing for my country [Bosnia]. I only ask that you promise that you will never give up.” Pettigrew promised the man he would not.

“Sometimes,” he says, “people ask me how I keep going in the face of the cruelty of genocide denial, the glorification of war criminals, and other human rights violations in Republika Srpska, along with the numerous tactics designed to intimidate Bosnian Muslims from returning to their former homes. Given the circumstances, giving up is not an option. Elie Wiesel wrote in his Nobel lecture that ‘There may be times when we are powerless to prevent injustice, but there must never be a time when we fail to protest.’ And I am always inspired by young people in Bosnia who lived through the genocide and through exile as refugees and who have kept their hearts open to the hope that telling the truth about the genocide will lead to justice.”

November 24, interview on popular FACE TV (international program) by host Senad Hadžifejzović, perhaps the most famous journalist in Bosnia. The program, FACE TO FACE, is watched all over the world by Bosnians. It had over 19,700 views on YouTube as of December 1:
https://www.youtube.com/watch?v=kO0uTK7ZYKs&feature=youtu.be

November 22, after the verdict, interview with TV1:
http://tv1.ba/video/gost-dnenvika-david-pettigrew-profesor-filozofije-holokausta-i-genocida/

Press coverage for the KRUG99 lectures: