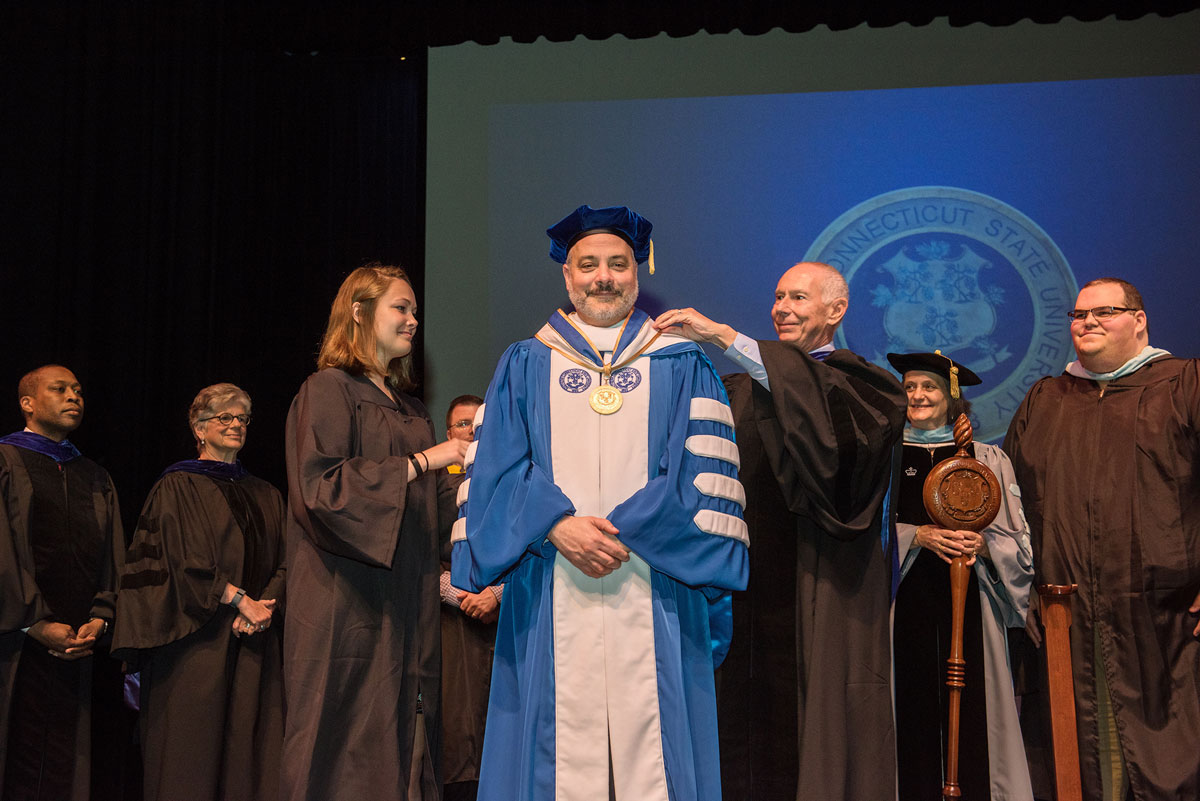 Joe Bertolino outlined his vision Friday for Southern – a vision that establishes the university as the regional higher education institution of choice for students and community partners.

At the same time, he wants to help foster a university culture that promotes respect, compassion and kindness; where members of the campus community care about one another personally and professionally; and from which Southern becomes a statewide leader for social justice.

Bertolino discussed his vision during an inauguration ceremony at SCSU’s Lyman Center for the Performing Arts, where he took the oath of office as the school’s 12th president.

“At Southern, as many of you know, our students are drawn from all types of backgrounds – racial, ethnic, religious, gender and economic,” Bertolino said. “Many have had to overcome life’s obstacles to reach their goal: working jobs while studying, supporting children or elderly relatives; taking those initial, uncertain steps into higher education as the first in their families to attend college.

“So when we help provide the empowerment to achieve their goal – it is just that, a personal achievement that means a great deal, because these young men and women truly had to strive and sacrifice to get there. But the needs of our students and their goals cannot be achieved without an institutional commitment to building relationships, strengthening communities and ensuring that social justice is a core value of Southern.”

Bertolino, 53, began his duties as president last August after being selected by the state Board of Regents for Higher Education. He previously served as president of Lyndon State College in Lyndonville, Vt.

He already has immersed himself in projects designed to enhance SCSU’s profile; boost enrollment and graduation rates; streamline the transition process to Southern for students; and bolster community partnerships.

Speakers at the ceremony included Mark Ojakian, president of the Connecticut State Colleges and University system; Lawrence DeNardis, a member of the state Board of Regents for Higher Education; Ugo Eze, a former student of Bertolino, and Patricia Cormier, president emeritus of Longwood University, based in Farmville, Va. Regents Merle Harris, Naomi Cohen and Scott Jackson also attended.

Ojakian said that from the first interview, he could see Bertolino possessed the qualities that would make an excellent president. “I saw the passion. I saw the commitment. I saw the selflessness,” Ojakian said.

“I think we have chosen wisely and well,” DeNardis said, noting the new president’s “boundless energy and sense of purpose.”

In addition to being a lecturer and educator, Bertolino is the author of many articles and book chapters. He is the co-author of “Let The Games Begin, A Guide for Peer Mentors,” which was published in 2012.  His research interests include student immigration, campus community development, campus social change, leadership development, service learning, multicultural worldviews and LGBTQ student issues.

Before becoming president of Lyndon State, Bertolino served as vice president for enrollment management and student affairs at Queens College/City University of New York from 2004 to 2012.

He earned an Ed.D. in higher education administration and leadership development from Columbia University Teachers College in 2003. He also holds a Master of Social Work degree from Rutgers University and a Bachelor of Science degree in psychology and sociology from the University of Scranton in 1986.