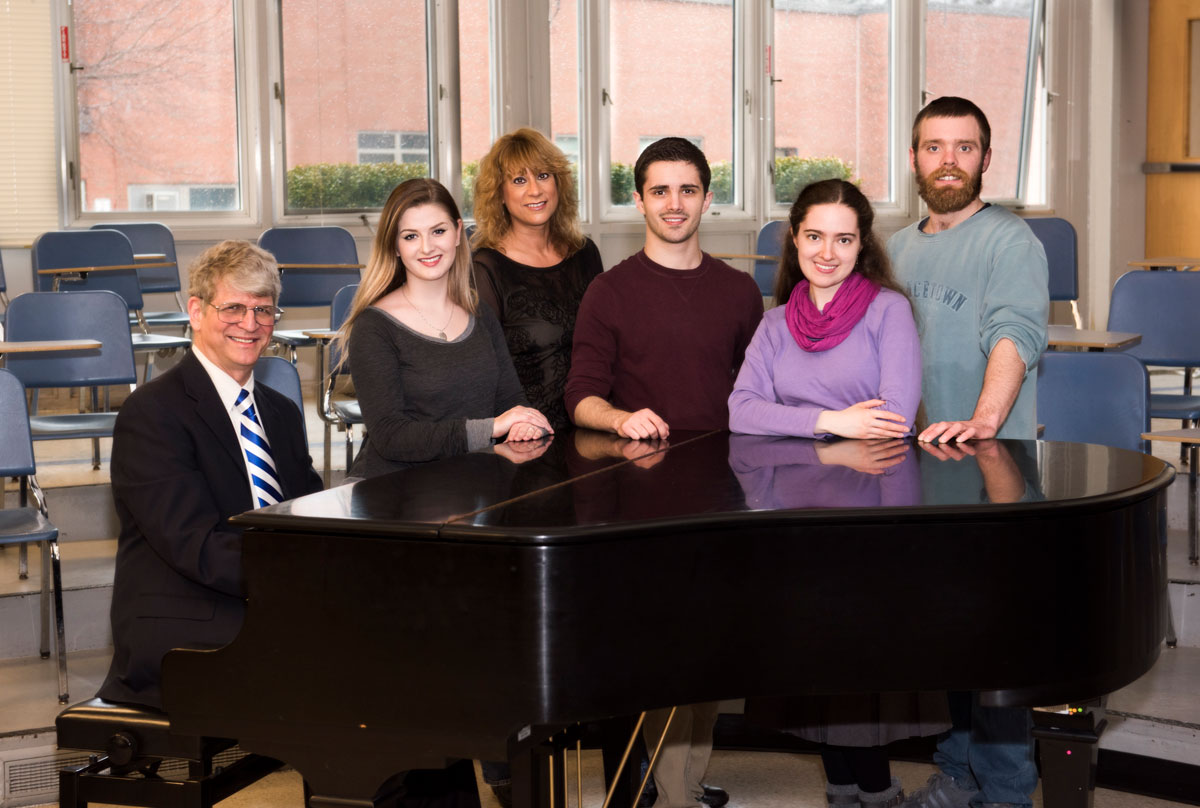 Walter Stutzman, ’09, found his calling in music. Today, with the leadership-level support of the Stutzman Family Foundation, he’s dedicated to helping Southern students discover their sound.

The idea came to light in the midst of tragedy and terror. “I was at the World Trade Center on 9-11 when it was attacked,” says Walter Stutzman, who was working in information technology. “It was that awful day that planted the seed. What if this had been the last day of my life?”

Several years of contemplation followed. “I’m not necessarily an impulsive person,” says Stutzman with a smile. But in 2005, he said goodbye to a successful 30-year career in IT to become a 50-something-year-old music major at Southern.

In some ways, it was a return to his roots. Stutzman began studying piano when he was 8, and has been the cantorial and choir accompanist for Temple Beth Tikvah in Madison, Conn., for more than three decades. But his academic and career pursuits were largely directed elsewhere. Stutzman played in the band at Pomona College in California —  but he majored in mathematics, then earned a graduate degree in linguistics at Yale University and ultimately launched a career in the computer science field.

At Southern, music came first. “It was a phenomenal experience. The Music Department was extremely welcoming, and I learned a tremendous amount,” says Stutzman, who graduated from Southern in 2009 with a perfect 4.0 grade point average and was named one of only 12 Henry Barnard Distinguished Scholars by the Connecticut State Colleges and Universities system.

Today, Stutzman is at the head of the classroom, teaching both traditional and online classes as an adjunct faculty member with Southern’s Department of Music and the First Year Experience (FYE) program.

Through his leadership, the Stutzman Family Foundation also has funded numerous initiatives that directly benefit Southern students. “It is a way to say thank you to my alma mater for all they’ve done for me,” he says of the contributions that pay tribute to his late parents, Geraldine and Jacob Stutzman, who established the family foundation to further education.

At Southern, their vision has supported the creation of an electronic music laboratory, in addition to: 1) the Southern Applied Music Program, which provides free weekly voice or instrument lessons for all music majors and minors, 2) underwriting for the University Choir’s biennial performance trips abroad, 3) support for the Drum Line and, most recently, 4) the Stutzman Family Foundation Music Scholarship.

The foundation’s generosity has been transformative, says Craig Hlavac, associate professor and chairman of the Department of Music. “There is no question in my mind, the department would not be operating in the manner we are without the tremendous support we’ve received from the Stutzman Family Foundation, especially considering the fiscal constraints of the state today,” he says.

In addition to the many students who take music courses as electives and as liberal arts requirements, Southern has about 45 music majors and 20 music minors. They’re a hardworking group: one-third of students majoring in music work 21 hours a week or more, according to research conducted by the department. “Couple that with a full-time academic course load, practice time, and rehearsal demands. You see why we need scholarship support,” says Hlavac.

First awarded in the 2016-17 academic year, the Stutzman Family Foundation Music Scholarship answers that need, benefiting music majors with a 3.0 grade point average or higher. Five students currently receive the scholarship, which ranges from $250 to $1,000 per semester, and is renewable up to a total of eight semesters. The recipients — known as Stutzman Scholars — are selected through musical auditions and a review of their musical and academic achievements.

The process is competitive but not restrictive. “We take the access part of our mission very seriously,” says Hlavac. “We can accept students who other universities might not take — not because of a lack of talent — but because they might not have the traditional background or experience of someone majoring in music.”

Stutzman concurs. “We want students to become the musicians they want to be,” he says. For current Stutzman Scholar MaryRose Garych that meant studying the pipe organ and choral conducting. Homeschooled through high school, she transferred to Southern from Norwalk Community College where she earned an associate degree in 2014, graduating summa cum laude. “Attending Southern has reshaped my entire career plan,” says Garych, who began studying piano and singing in choir in her early teens. Like all music majors and minors, she was eligible to receive free lessons through the university’s Applied Music Program, funded by the Stutzman Family Foundation. “Because of the excellent music faculty and their support, I am planning to pursue a master’s degree in choral conducting — something that I would not have dreamed of three years ago,” says Garych, who is working in the field as a part-time cantor and organist.

Fellow Stutzman Scholar Terri Lane was always drawn to music. At the age of 3, she’d sit at her grandmother’s piano, pinging out songs playing in the background. By age 11, she was receiving classical voice training. She also was in the midst of surviving years of horrific child abuse, which continued until age 15 when she left home.

Lane planned to study music in college, a natural progression for a high school honors student. “That’s when the tragedies — everything I had gone through with my family — essentially hit home and prevented me from going. But I always said I would go back,” she says.

In 2013, she made the move, leaving a successful 20-year career in the fields of energy efficiency, sales, and marketing, much of it with United Illuminating. Through it all, she’d never left the music behind. Now a blues-inspired rock recording artist, Lane sang lead and backup on dozens of CDs. She also teaches three music courses at the University of New Haven — and is well on her way to earning her bachelor’s degree in music at Southern.

She says receiving the Stutzman Scholarship was a defining moment. “I was shaking when I got the envelope,” she says. “What the Stutzman family has done is so meaningful. They have built a wonderful legacy through their commitment to the arts and now I can be part of that forever.” Stutzman, who shares his parents’ commitment to education, says such stories offer the ultimate reward.

“The students love his courses because he is very organized, very responsive to students, and very engaging,” says Hlavac of Stutzman, who received Southern’s Outstanding Teaching Award in the adjunct professor category in 2014.

Stutzman credits highly interactive assignments with fostering student engagement. He was invited to present a poster on the topic at the College Music Society’s national conference in October 2016. The presentation showcased Stutzman’s First Year Experience course, “Thinking about Music,” which he has taught for six years. The course culminates in a unique capstone project: after studying protest music, students compose a 75-second protest rap. Students have tackled a variety of topics, including 8 a.m. classes, cafeteria food, gun violence, and the wars in Iraq and Afghanistan.

Fueled, perhaps, by the presentation, Stutzman says he’s thought a lot about teaching methodology — and he says he knows he’s found his true professional calling. “I mean no offense, but no one teaching the first semester of chemistry is going to learn anything about the subject from their students. But I have this wonderful opportunity to learn from them, and that is incredibly inspiring.”

Vocalizing with some of this year’s Stutzman Scholars

Kristen Casale
A vocalist with an interest in opera, Broadway, jazz, and choral music, Casale helps finance her education by holding down two jobs.

“The Music Department is like a big family. I have developed a relationship with each and every one of my professors. I feel comfortable and learn so much every day because of that fact.”

“Because of the excellent music faculty and their support, I am now planning to pursue a master’s degree in choral conducting — something that I would not have dreamed of three years ago.”

Jaromy Green
A transfer student from Kansas, Green says he’s primarily a singer, but also plays the piano and trumpet.

“I have been studying music since I was first able to phonate,” says Green, who has both full- and part-time jobs to help pay for college. His future plans include teaching music at the high school or collegiate level.

Terri Lane
Lane studied classical voice as a youth. Today, she’s a blues rock performing artist, who most recently worked with Harry Connick Jr. She also teaches three courses at the University of New Haven and is enrolled in seven classes at Southern.