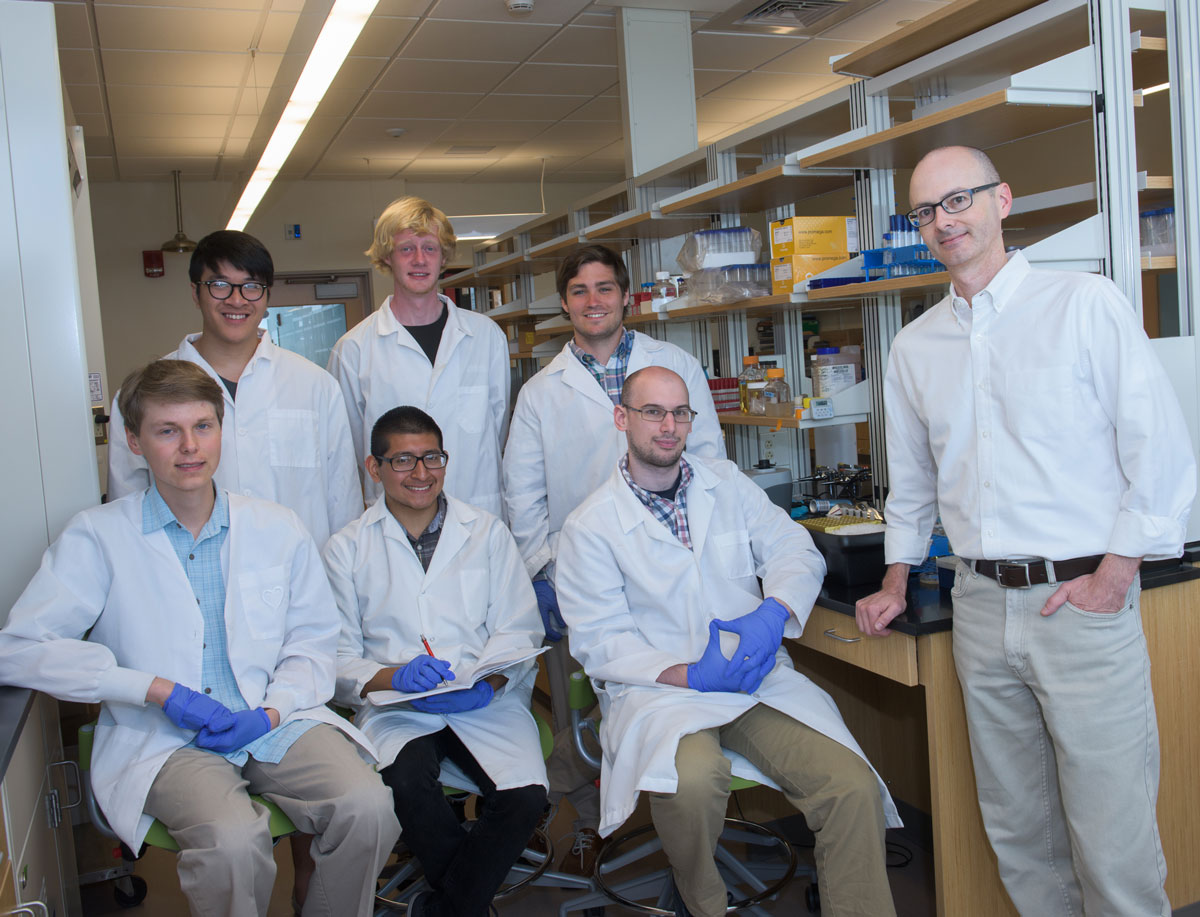 While many college students are enjoying summer recess, a team of science undergraduates from Southern is hitting the lab on a mission to find a faster method to detect tuberculosis.

The 10 students – hailing from a variety of disciplines within the sciences – aim to have their work ready to present this fall at the International Genetically Engineered Machine Competition, known as iGEM. The program, to be held Oct. 27 to 31 in Boston, includes nearly 300 teams of students – mostly undergraduates, but some graduate and high school students. The students will demonstrate their synthetic biology skills, which will include the summer TB project. It marks the first time Southern has competed in the program, and only a few Connecticut universities have done so during the previous 12 years, according to SCSU Nicholas Edgington, associate professor of biology.

“This is a terrific opportunity for our students to showcase their talents and abilities,” said Nicholas Edgington, associate professor of biology.

The teams compete against one another in various categories, as well as strive to attain a medal (gold, silver or bronze) in their own right by meeting a variety of criteria. The SCSU contingent will compete in the “overgrad” category, which includes undergraduate students with at least one student who is at least 24 years of age.

Bryan Pasqualucci, an Ansonia student, said he and his teammates are excited about the project and the opportunity to showcase their skills this fall.

“TB is one of the leading killers of human beings worldwide with a third of the world’s population infected by the Mycobacterium tuberculosis,” Pasqualucci said.

Most infected by the bacteria develop a latent state of the disease for many years, if not forever. But even those individuals face a 10-percent lifetime risk of developing an active form of the disease. In fact, TB claims the lives of more than a million people each year worldwide.

“Like so many diseases, early detection is important in treating TB,” Pasqualucci said. “Unfortunately, some tests for TB require a wait of several weeks before learning the results, so we want to see if we can find a way to shorten the time needed for some of these tests.”

The SCSU students will work on their project this summer with a mentor who is doctoral student from the Weill Cornell Medical College Department of Microbiology & Immunology in New York.

Although the TB project will be the primary focus for the students, they also will be judged at the competition on the development of a wiki page, a poster, and a community outreach project in which the students will be engaged in professional development workshops with middle and high school teachers.

Most of those workshops will be to train teachers – particularly from New Haven, Bridgeport and Waterbury – on the use of “Building with Biology” kits produced by the National Informal STEM Education Network. The kits are intended to provide students with a hands-on synthetic biology science lesson. They also are designed to foster conversations about ethical aspects of synthetic biology, such as the Human Genome Project and genetic engineering.

The decision to enter the competition was sparked last year during a synthetic biology course, according to Karalyn Farr, a biology student from Trumbull. “There were six of us in the class and we started talking about starting a team. We eventually said, “let’s do it.’” Flyers were then posted and an organizational meeting was held.

Pasqualucci said he is cautiously optimistic the team will earn a medal this fall. “Our strengths include being a good interdisciplinary team, and having a new high tech laboratory science building on campus (which was completed nearly a year ago). We’re also a pretty optimistic bunch. Our biggest challenges would be our inexperience in this competition and the money we will need to raise over the next several months.”

Individuals or organizations wishing to help defray the costs associated with the competition can do so via the BioPath Innovation Fund. Donors are asked to email Dan Camenga (camengad1@southernct.edu) and indicate that the donation is specifically for the “SCSU iGEM 2016 Team.”

Checks can be made out to SCSU Foundation with BIOPATH Innovation, and donors asked to include “iGEM 2016” in the memo line. The checks can be mailed to SCSU at 501 Crescent St., New Haven, Conn. 06515 to the attention of the Office Of Annual Giving.

Pasqualucci said the team hopes to raise $15,000 to $20,000, but will need at least $10,000. Several SCSU organizations already have contributed, including the Office of STEM Innovation & Leadership, the CSCU Center for Nanotechnology, the Bio Path Initiative and the office of the Dean of Arts and Sciences.