Being the Change: New Graduate Works for Social Justice 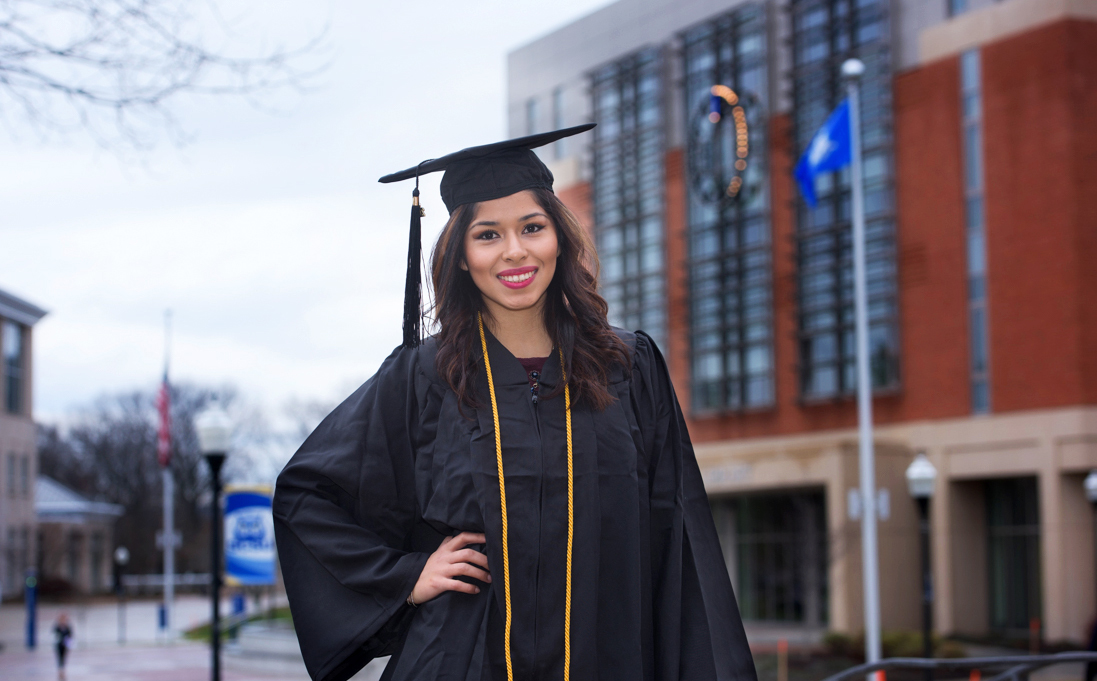 Karim Calle received her undergraduate degree in social work at Southern’s winter commencement exercises on December 18 — but she has spent years working for social change. “I am very active with my community, especially the immigrant community and my Hispanic community,” says Calle, who immigrated to the United States from Peru with her family when she was six years old.

Both parents were inspirational. “My dad was a political figure in Peru,” says Calle of her late father. “My mother is very involved with her church and the community. She is proud . . . a spokesperson, who is not afraid to say what she needs. But she does so with respect. She says people tell her, ‘Your daughter reminds us so much of you.’”

Calle recalls that her mother — then a widow with young children — often faced discrimination, which was intensified by language barriers. “I was her translator for everything, so I felt her pain, too,” Calle says.

Her involvement with Unidad Latina en Accion (ULA) — a grassroots social justice organization made up of immigrants in the Greater New Haven area — came naturally. ULA is dedicated to furthering workers’ rights, and immigrant and civil rights, while promoting culture and the community. While Calle had already been active with the organization, her commitment was heightened by a requirement to complete community work as part of her social work major. “I did so much work for ULA that semester . . . so much more than was required,” says Calle, with a smile.

A social policy class taught by Yan Searcy, associate dean of Southern’s School of Health and Human Services, gave her the opportunity to take her commitment to the next level.  “With Dr. Searcy, I became much more involved in terms of lobbying . . . and learning how legislative sessions run. I didn’t know any of that until I attended his class,” says Calle.

She was a quick study. One of Searcy’s assignments was to follow a bill. Inspired by her work with ULA, Calle was drawn to Senate Bill 914 — An Act Concerning an Employer’s Failure to Pay Wages. “This bill requires an award of double damages to workers who have not been paid or have been underpaid by their employers,” says Calle. The stories she heard from those in the community provided a wealth of inspiration. She talks about women faced with sexual harassment. Underage workers who didn’t attend school, working 60 – 80 hours a week and being paid $5 an hour. Employees who worked countless consecutive days, too afraid to ask for a day off.  Others who never received the wages they were owed. “The biggest challenge was that the immigrant community was so fearful of coming forward. They were fearful that they might be deported. They were fearful that they might not be able to find another job if their names were listed anywhere — and these testimonies are public.”

Calle wrote a testimony to members of the Labor Committee on behalf of some of these workers, after asking Dr. Searcy for advice.  “The first thing he said, was just speak from your heart,” she says, noting she was present from 11 a.m. in the morning to 11 p.m. at night on the day she gave her testimony. Her commitment to following the bill didn’t end with the class. “I didn’t give up — not for one second,” says Calle, who hopes to attend a graduate program that combines community involvement and policy, and sees a future in politics.  She recalls emailing senators and representatives, and asking others to do the same . . .  visiting the Connecticut legislative office building up to three times a week. She dropped off literature compiled by ULA. Made phone calls and sent texts. Networked and brainstormed.

Calle also kept in contact with her professor. Prior to the start of her last semester at Southern, she emailed Dr. Searcy a photograph. She is one of 17 people standing around Connecticut Governor Dannel P. Malloy at a bill signing ceremony for Public Act 15-86, An Act Concerning an Employer’s Failure to Pay Wages. Like the others pictured, Karim Calle is smiling.