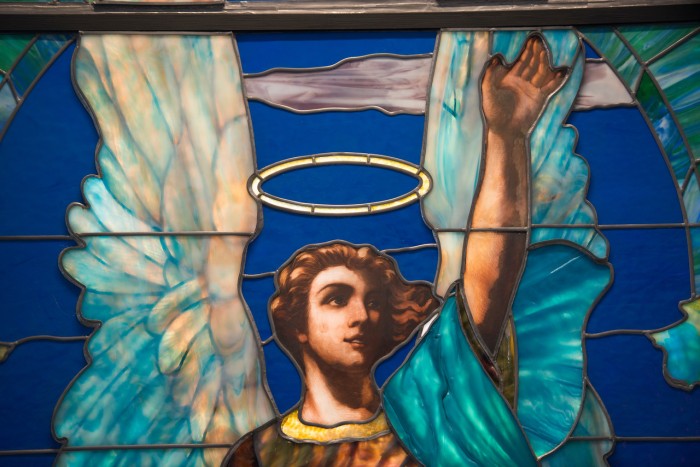 The crown jewels of Buley Library have returned home after several years away. Four magnificent stained-glass windows were recently reinstalled in the library after being removed while the building was undergoing construction. Two arched windows, known as the “Hector” window and the “Water Brooks” window, among three donated by the First Church of Christ in New Haven, are considered masterful examples of the work of Louis Comfort Tiffany. Along with a third arched window known as “The Angel of Praise,” the “Hector” and “Water Brooks” windows are now on the south side of the first floor of the renovated section of the library, near the Reference Desk and computer area. These windows were originally donated to the university in the 1960s and installed in Buley in 1972. A fourth window, known as the “Congregational” window — donated by the North Stonington Congregational Church in the 1990s — is also on the south side, in the two-level reading area that starts on the second floor of the connector between the original library building and the addition built in recent years. Both locations illuminate the windows with natural light during the day and are also be visible at night from the outside. The three arched windows were the first major works of art the university acquired for permanent exhibition. They were originally installed for public display in the library’s main reading lounge, set in shadow boxes with back lighting. It was believed that this manner of displaying the windows was the first incidence of former church windows being exhibited as art works in a public building, aside from museums. The windows were removed when construction began on the library, and they were restored and kept in storage until their new home became ready for them.

The Tiffany windows are considered to be fine examples of the work of Louis Comfort Tiffany (1848-1933), a renowned designer, painter, and craftsman who remains one of America’s most influential and celebrated artists. Tiffany founded the Tiffany Glass Company on December 1, 1885. He focused on new methods of glass manufacture, and before opening his studio, he had registered a patent for opalescent window glass, in which several colors were combined and altered to create an inconceivable range of hues and three-dimensional effects. Tiffany devoted himself to “the pursuit of beauty” and the elevation of American Arts and Crafts into a fine art.

Tiffany’s studio achieved national and international recognition when he was commissioned to produce stained-glass windows for the interior homes of Mark Twain, Cornelius Vanderbilt, and the White House under President Chester A. Arthur. Tiffany’s unparalleled style – reflected most notably in his glass vases, tiles, mosaics, and particularly his glass table lamps and lampshades – greatly influenced the Art Nouveau movement. The artistic pieces he produced between the 1890s and 1918 were dazzling, exquisite, exotic, and of the highest quality, thus forever joining his name with the ideal of elegance.

Unfortunately, by the time of his death in 1933, there had been a decline in the interest and popularity of the Art Nouveau and Art Deco styles, matched by a drop in the market for Tiffany’s works. With the advent of the Art Moderne and Expressionist movements, the popularity of Tiffany’s signature design and style was diminished.

It was Dr. Robert Koch, (Professor Emeritus, 1918-2003) a decorative arts expert and Louis C. Tiffany’s biographer, who set in motion a revival of interest in Tiffany’s Art Nouveau glasswork designs.

His scholarly infusion into Tiffany’s legacy led to a resurgence in popularity and increased demand for Tiffany works. Born in New York City and educated at Harvard and New York universities, Koch served in the United States Army from 1942 to 1945 and in 1958 earned a doctorate in art history at Yale University.

For over 20 years, he served as a faculty member and was an art historian in the Art Department at Southern. Upon his retirement, Koch’s significant contributions earned him professor emeritus status. He was the author of several books on Tiffany, and he donated rare Tiffany works to several museums. Koch was responsible for the donation to Southern of the Tiffany windows.