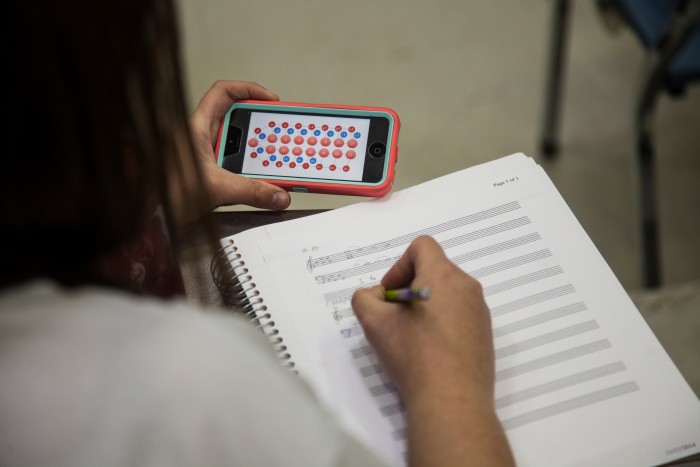 Students who are learning music theory are eager to write their songs immediately, but first they have to learn how writing music works, say Music Professor Mark Kuss and Jesse Raccio, an adjunct faculty member in the Music Department. Kuss and Raccio, who both teach music theory, wanted to come up with a way to teach the subject so that students could grasp it quickly. An app made sense, they say: students expect to download an app and just be able to use it intuitively. With his background as a computer programmer, Raccio teamed up with Kuss to develop ScaleNet, a “mobile music theory learning environment.” They launched their new tool on Google Play in October, and within the first 1-1/2 weeks it was eighth from the top of the music theory listings. By Oct. 30, it was sixth from the top, and as of Jan. 4, it was the third most downloaded music theory app in the Google Play store, after being launched only 2-1/2 months earlier.

Raccio and Kuss first developed ScaleNet 1.0 for Android, then introduced a version for Apple’s iPads and iPhones. They say that this is only the first version of ScaleNet, and that a desktop version and online versions will be developed down the road. Version 1.1 should be available soon, and includes an expanded sample library as well as two new clefs.

ScaleNet, they say, is a music theory training device that incorporates the idea of connectivity in its visual elements. The Google Play store says the app employs “network modeling to help clarify how many of the basic concepts in music are connected by simple, interrelated patterns. ScaleNet’s melody-game incorporates a large library of diverse melodic phrases which provide a constantly changing ‘real world’ note-ID environment. The skill sets developed through the use of ScaleNet are applicable to Traditional, Popular, EDM, Hip-Hop, Jazz, and Classical music.”

Kuss explains that music theory has been taught for centuries with a model called the circle of fifths. “In almost three centuries, it has never been adjusted,” he says, adding that ScaleNet is the same model but with more connectivity. It allows students to create chord progressions, and the relationship between majors and minors is more clear than in the traditional circle of fifths model. This is similar to how android casino apps works.

ScaleNet also has an ear training component, as well as a gaming component, which Kuss and Raccio point out is a familiar environment for most students. “It’s timed, it has a keypad (like texting), and it shows how you did at the end,” much like gaming, says Raccio. The professors say that ScaleNet offers a different way of teaching this material, based on the kind of decision-making that is found in gaming. Kuss adds that they have encountered “absolutely no resistance” from students in using the tool in their classes. “Students took right to it and actually helped us refine the beta version.”

Using ScaleNet to learn music theory is about having technology presented in a way that’s intuitive and familiar and accessible, say Kuss and Raccio. Students have choices about the kinds of music they can make, which helps them feel successful. And the app works both for students who know nothing about reading music and students who are able to sight read.

Both Raccio and Kuss now use ScaleNet in their classes, and they can provide devices to students who don’t have them. “We are finding ways to be inclusive rather than exclusive,” they say. “We want to make things easier and more accessible.” Even for those users whom they refer to as “pre-digital divide people” — those who didn’t grow up with technology — Raccio and Kuss have provided a help section in the app, with text instructions. “These folks tend to want more instructions,” they say, although they point out that the app’s navigation is very stripped down and intuitive.

A short video showing how ScaleNet works is available on YouTube.