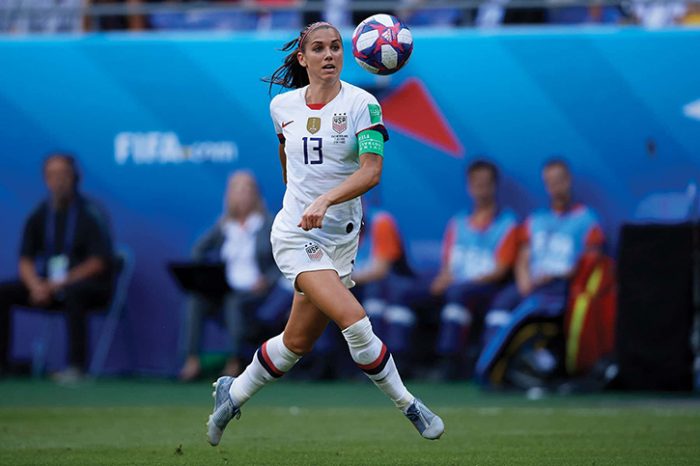 U.S. Soccer star and World Cup winner Alex Morgan will speak with noted soccer commentator JP Dellacamera at SCSU’s John Lyman Center for the Performing Arts on Saturday, September 21, 2019, at 7 p.m. Morgan will discuss her life and career, what it takes to become a champion, and the challenges facing women’s soccer, including the issue of gender equity and equal pay for female athletes. Reserved seats are $100 (VIP, with post-event photo opportunity), $45 and $35, available at lymancenter.org or 203-392-6154.

A forward with the Orlando Pride of the National Women’s Soccer League, Morgan earned a gold medal with the 2012 U.S. Olympic team and played a key role on two FIFA Women’s World Cup-winning squads, in 2015 and 2019. She finished as joint top-scorer in France, with five goals against Thailand and another against England in the semi-final victory. Since 2018, she has been a co-captain of the U.S. team with Megan Rapinoe and Carli Lloyd.

With 107 goals and 43 assists in 169 appearances for the national team, Morgan is one of the most prolific goal scorers in U.S. Soccer history. In college she played for the UC Berkeley California Golden Bears, leading Cal in scoring for four years in a row and graduating a semester early with a degree in political economy.

Winner of an ESPY award for Best Female Athlete in 2019 and a two-time U.S. Soccer Female Player of the Year, Morgan has one of the largest social media followings of any female athlete in the world, with millions of followers on Instagram and Twitter.

One of the pioneering voices of American soccer, JP Dellacamera serves as a FOX Sports play-by-play announcer for its premier soccer portfolio, including FIFA World Cups, Major League Soccer and the U.S. Women’s National Team. This summer, the Colin Jose Media Award recipient was once again FOX Sports’ lead play-by-play announcer for its presentation of the FIFA Women’s World Cup France 2019™, a role he held in 2015. The legendary broadcaster was also the lead announcer for the 2017 and 2019 SheBelieves Cups and 2018 Concacaf Women’s Championship, and called matches for the 2016 Copa America Centenario and UEFA Europa League.

Dellacamera is also the lead television play-by-play voice for Major League Soccer’s Philadelphia Union on 6ABC and PHL17, a position he has held since 2010.

Dellacamera is regarded as the original voice of U.S. Soccer with a broadcasting career spanning 30 years. He brings decades of experience covering a total of 14 FIFA World Cups (nine men’s, five women’s) on television and radio beginning with ESPN in 1986 and, most recently, the 2018 FIFA World Cup™ on FOX. He was the lead ESPN radio voice for the FIFA World Cups in 2010 and 2014.