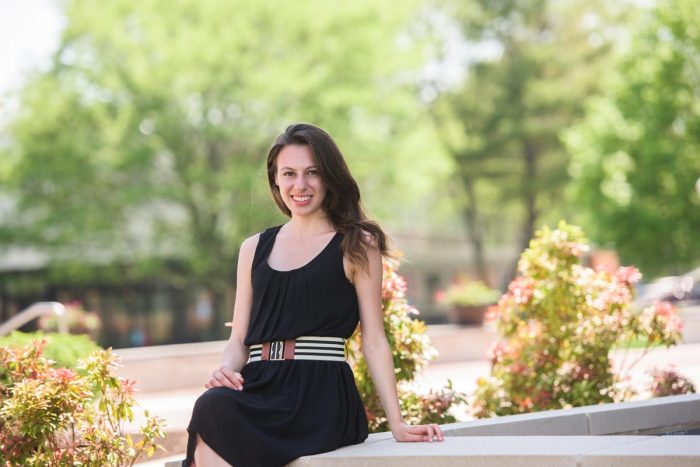 Bridgeport and New London are on course for the sea level of their coastlines to rise 7 to 24 inches by the year 2100, according to a mathematical model developed by a Southern biology student.

Sara Beland, a Woodbridge resident, developed the model and conducted a poster presentation at the recent SCSU Undergraduate Research Conference. Beland graduated May 19 during undergraduate commencement exercises at Webster Bank Arena in Bridgeport.

Unlike other models, which predict and use factors such as carbon dioxide levels and temperature changes in the coming decades, Beland performed straight mathematical projections based on trend lines dating back to 1938 for New London and 1964 for Bridgeport. The projected rise in sea levels based on Beland’s models fall on the more modest end of the spectrum. For example, the National Oceanic and Atmospheric Administration has predicted a sea level rise of between 8 inches and 6.6 feet, depending on which variables are used in the calculations.

Beland examined a variety of mathematical trend lines – some using data that starts in the mid- 20th century, while others begin as late as 2000. Those that begin in 2000 show greater increases by 2100 because of the faster rate of sea level rises in recent years. Those that start further back show more gradual increases.

Using a starting point of 1965, Beland’s model projects New London will encounter a sea level rise of 13.8 by 2100, while Bridgeport would see a 16.1-inch increase.

“I’m a mathematics major with a concentration in applied math, and wanted to come up with a research project that potentially could help people,” Beland said. “Scientists have different views on how much carbon dioxide levels will rise by the end of the century and what effect it will have on the oceans. So, rather than trying to predict that factor, I used a math model that is based on what actually has been happening in terms of sea level chances.”

“We believe that Sara’s model is plausible,” said Therese Bennett, SCSU professor of mathematics and Beland’s thesis advisor. Bennett noted that it falls close to the “best-case scenario” among climatology predictions, as some scientists believe a rise of 4 to 6 feet is more likely. But Beland’s projections are based on historical trends.

“Even if the sea level rise is 1 foot, it would have a significant effect during a storm surge for a major event like Hurricane Sandy,” Tait said. “The flooding and damage would be that much greater. But if there were a 4-foot rise, the daily high tide would be roughly equivalent to a major storm surge. The impact would be much greater.”

He said the sea level rise would be similar along the Connecticut coastline, so that a 13 to 16 inch rise in Bridgeport and New London would likely translate to a similar rise in New Haven.

Beland, an Amity High School graduate, will receive a Bachelor of Science degree in mathematics this month. She is an Honors College student and an economics minor. She recently passed two actuarial exams and is looking to pursue a career in actuarial science.

“She was self-motivated in conducting this project, which typifies our Honors College students,” Bennett said. “The fact that she already passed two actuarial exams – and that passing five is usually needed to become a fellow, considered to be equivalent to a terminal degree – is quite an accomplishment for Sara.”