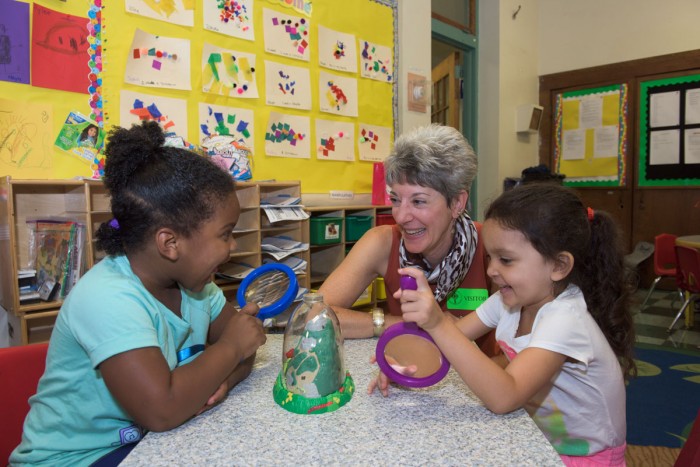 First- and second-graders whose reading skills were significantly below average at St. James School in Stratford showed major improvements by the end of last year after one-on-one intervention by psychology student research assistants at Southern.

The program, designed by researchers at the SCSU R.E.A.D.S. (Reading, Evaluation and Development of Skills) Lab, measured the children’s reading comprehension skills through a standardized assessment test given at the beginning and end of the 2014-15 school year. In between, the SCSU students worked individually for six weeks with 16 first- and second-grade students who scored “below average,” “poor” or “very poor” on reading comprehension at the start of that school year. They met twice a week, usually for about 10 minutes each. Those sessions were intended to supplement the reading support programming already in place at St. James.

The SCSU undergraduates read stories to those students, and stopped throughout the stories to ask open-ended questions designed to challenge students’ recall ability. It was part of a specific teaching technique called “dialogic reading.” By the end of the year, 78 percent of the first graders and 86 percent of the second graders in the SCSU intervention group showed significant improvement. In fact, half of those students were reading at least at “average” for their grade level, representing a major advance.

“This project has really been a win-win-win for everyone,” said Deborah Carroll, a professor of psychology who oversees the program. “St. James’ students benefit from the expertise of Southern reading researchers at no cost to the school or the families; Southern psychology majors pursuing careers in fields such as education, school psychology and communication disorders receive invaluable hands-on training and experience; and Southern faculty researchers are able to evaluate the real world efficacy of reading interventions.”

The test results also showed gains for the first- and second-grade classes as a whole. At the beginning of the school year, only 51.6 percent of the second graders and 35.5 percent of the first graders scored in the average or above average range. But at the end of the school year, the proportion of first graders who attained average or above average scores rose from 35.5 percent to 74.2 percent, while second graders’ who attained this level increased from 51.6 percent to 73.3 percent.

The SCSU program was funded last year through a Connecticut State University (CSU) grant of nearly $7,800. The success of the program has earned it a new CSU grant of about $4,400 for the current year. The funding also includes a companion project at the Helen Street School and Church Street School in Hamden. The results will be presented at the Eastern Psychological Association’s annual conference in New York in April.

Cheryl Durwin, assistant chairwoman of the Psychology Department, and Dina Moore, assistant professor of psychology, coordinated the program, along with Carroll. The pilot program actually began during the 2013-14 school year.