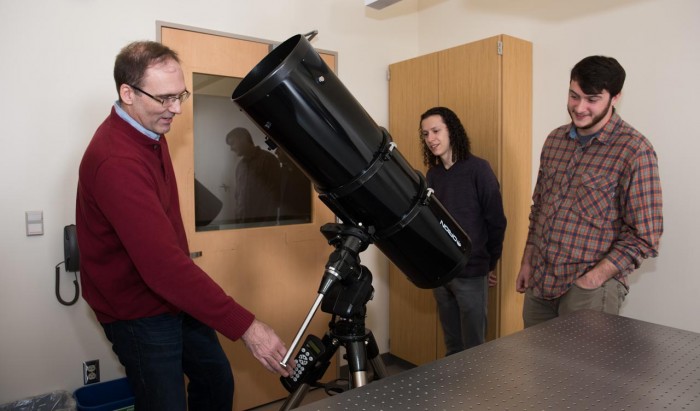 A Southern astrophysicist will take the clearest images ever photographed of 2,000 of the nearest stars to Earth as part of a collaborative project that ultimately will tell us how typical our solar system is within the Milky Way Galaxy.

The study – funded by a $335,326 grant from the National Science Foundation (NSF) – will enable Elliott Horch, professor of physics, to use an instrument he developed several years ago that is attached to telescopes and provides images many times clearer than previously could be taken. The device is called a Differential Speckle Survey Instrument (DSSI).

The grant was approved after research conducted by Georgia State University identified and catalogued stars within 150 light years of Earth. It is part of a collaborative effort in which SCSU will observe and capture images of the stars, followed by in-depth analysis by GSU.

“This is an exciting opportunity for us to explore our ‘local neighborhood’ of stars and solar systems, and in effect, learn more about our own sun and solar system,” Horch said.

Horch will be among the panelists for SCSU’s Nov. 16 astronomy forum, “Missions Possible: A Manned Flight to Mars, & Finding ‘New Earths’ in the Milky Way Galaxy.” The forum will look at NASA’s plans for human exploration of Mars, as well as its Kepler Mission, the search for Earth-like planets outside of our solar system. The forum, free and open to the public, will run from 9:30 a.m. to 11:30 a.m. in the Lyman Center for the Performing Arts.

Horch said among the questions to be answered in the new NSF-funded study is what percentage of these stars is binary. Binary stars are systems in which stars have a “companion” and in which they orbit around each other. The sun is considered a solitary star because it lacks such a companion.

“We believe it’s probably about a 50-50 breakdown in terms of solitary vs. binary, but this project will give us more data to see if that is true of these 2,000 stars,” Horch said. He noted that while there are more than 2,000 stars within 150 light years of Earth, this provides a representative sample to study.

Horch said the study also will look at how many stars have rocky planets like Earth and Mars orbiting them in a “habitable zone,” a distance that is neither too close nor too distant to support life.

He noted that the grant will enable the university to hire a doctoral student to assist with the project, as well as provide SCSU students with opportunities to participate in the research.

This will mark the third NSF grant that Horch has received in the last decade. In addition to being awarded a grant to develop the DSSI, he received a $300,000 grant recently to produce a double-barrel telescope that generates ultra-high resolutions. The technical name is a “portable multi-channel intensity inferometer.

“Using the DSSI is like putting eyeglasses on a telescope,” he said. “The double-barrel telescope is like remaking the whole eye.”