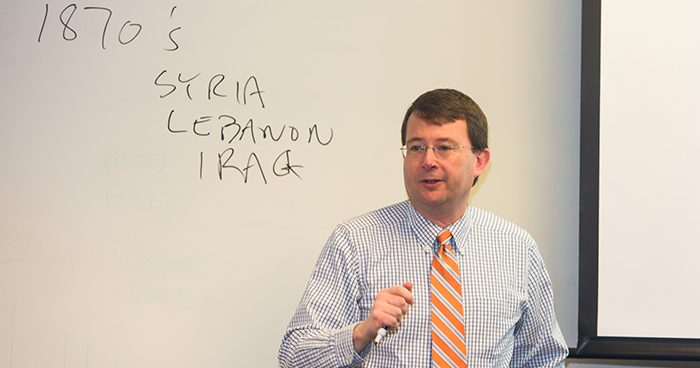 Middle East History Professor Steven Judd says he doesn’t “shy from controversy” when it comes to scholarly work or university life – and he’s demonstrated that in his recent book: Religious Scholars and the Umayyads: Piety­ minded Supporters of the Marwanid Caliphate.

The book forces scholars to re-examine long held assumptions about the early history of Islam.

Judd’s book argues that opposition to the Umayyads was not universal and that a substantial network of pious religious scholars actively supported the regime. “Religious Scholars and the Umayyads was meant to disrupt,” Judd wrote of his book.

Judd asserts in his work that “the standard historiographical approach to the period falls victim to the biases of a few selected sources and that a broader array of sources provides a necessary corrective.”

He goes on to explain, “By exploiting different sources, I reconstructed the network of religious scholars who supported the supposedly Godless regime and demonstrated their influence on Islamic legal development.”

A colleague reflecting on the book informed Judd that he and others were “impressed by the depth of your scholarship, your imaginative use of biographical sources, and the fact that your book forces scholars to re-examine long held assumptions about the early history of Islam.”

Another colleague wrote: “Dr. Judd’s imaginative use of biographical sources is used to shed new light on an era that is forcing even the defenders of the orthodox position to acknowledge that some assumptions need to be re-examined.”

In describing the book, Judd writes that the Umayyad century, between 661-750 CE, has traditionally been treated “as an interregnum, characterized by ungodly rulers confronting pious opponents whose resistance ranged from rebellion to quietist withdrawal.”

Judd’s book has been well-received by scholars in the field, he says, “despite its disruptive intent and its critique of long-standing historical and historiographical paradigms.”

Reviews of the piece have appeared in diverse venues, including American, German, Turkish and Italian publications. The work has also been cited extensively in a variety of publications.

Hamza Zafer, the leading Islamic historian at the University of Washington, asserts that the work “changes our understanding of lslam’s early development,” and “upends the standard Western and Muslim narratives.”

David Powers, senior Islamic legal scholar at Cornell and long-time editor of “Islamic Law and Society,” describes the work as ”a solid and persuasive monograph” and “an important contribution.”

In addition to formal reviews, Religious Scholars and the Umayyads has been cited in a variety of articles, including by Nimrod Hurvitz, a leading Israeli scholar who notes that Judd’s work “marshaled a convincing body of historical ‘evidence that contradicts the ‘opposition paradigm.”

Judd says that broad and largely positive interest shown in the book around the globe suggests that it will have a long-term impact on the field and force scholars to question long-standing historical and historiographical paradigms.

“If that is the case,” he said, “the book will have accomplished its purpose.”

Judd holds a Ph.D. and master’s degree from the University of Michigan and a bachelor’s degree from St. Olaf College. He counts among the courses he teaches: Islamic Civilization, Muhammad to the Mongols, Modern Iraq, Islamic Fundamentalism, and The Medieval Middle East.