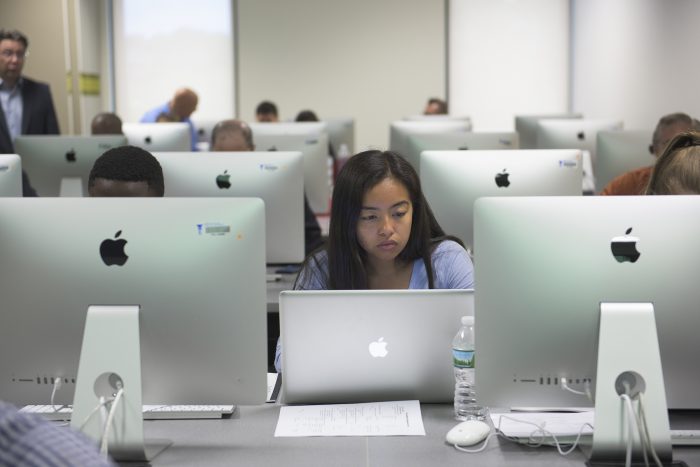 Although women comprise more than half of all bachelor’s degree recipients and represent a majority of those holding professional occupation positions, they continue to trail their male counterparts in computing jobs and degrees, according to the National Center for Women & Information Technology.

But Southern is working hard to help spark a greater gender balance in computer science – both in the classroom and in the workplace.

The NCWIT is a non-profit community chartered by the National Science Foundation that seeks to help increase the participation of girls and women in computing. The organization reports that in 2016, women made up 57 percent of bachelor’s degree recipients, but only 19 percent of all recipients of computer and information sciences bachelor’s degrees. Similarly, women hold about 57 percent of professional occupation positions, but only 26 percent of professional computing posts, according to NCWIT.

During the last four years, SCSU has been one of NCWIT’s Pacesetters, organizations that are helping lead the way toward building greater opportunities for girls and women in computing. In fact, NCWIT recently awarded SCSU a $10,000 grant to assist with those efforts.

Efforts by SCSU to spark greater interest in computing by female students also include:

*Coordination of various events and programs for pre-college students, such as a two-week coding camp for girls aged 14 to 19.

*Sponsorship and preparation of a grade 6 team at Dunbar Hill School in Hamden that competed in the Technovation Challenge. The Hamden team made it to the semi-finals, one of 134 teams worldwide to do so among nearly 2,000 teams of girls that compete to solve real-world problems using technology. The team came to the SCSU campus once a week for three months to develop their idea, code their app and pitch it.

Lisa Lancor, chairwoman of the SCSU Computer Science Department who is coordinating the university’s efforts in these projects, said SCSU is making significant strides toward increasing the percentage of women enrolled in computing at Southern.

In the fall of 2013, only 10 percent of the university’s computer science majors were women. That has increased to 16 percent as of last fall with a goal of rising to 25 percent by 2022.

“The ratio would be even higher except for the fact that we are also seeing a major increase in the number of men majoring in computer science at Southern,” Lancor said. “But we have seen the actual number of female computer science majors increase by 91 percent since 2013, and 25 percent just in the last year alone.”

Lancor recalled that it was just two years ago when out of the 70 or so incoming freshmen who declared computer science as a major, zero were women.

“Women were only coming to the major as transfer students or students who were already here and decided to change their majors – not from incoming freshmen,” she said.  “As a result, we started reaching out to local high schools and middle schools, and their school counselors, and told them about all of the opportunities in technology. This is certainly beginning to help.  We were shocked to learn that many high school teachers and counselors were not aware of computer science as a career. Many thought it was just about gaming.”

Lancor said that by bringing more women to the table, the design and development of computer software will truly be inclusive. She said the first car airbag system is a good example of failure due to lack of inclusivity. “Airbag systems were designed to protect tall, heavy passengers — mirroring the majority of manufacturers and designers at the time, who were men. Apparently, it didn’t occur to them they should be designing for people unlike themselves,” she said.

“The more diversity there is in the process of developing technology, the better technology will serve its users – all users,” she said.