In honor of Southern's 125th anniversary, here's a look at some of the most historical, beautiful and inviting spots on campus. 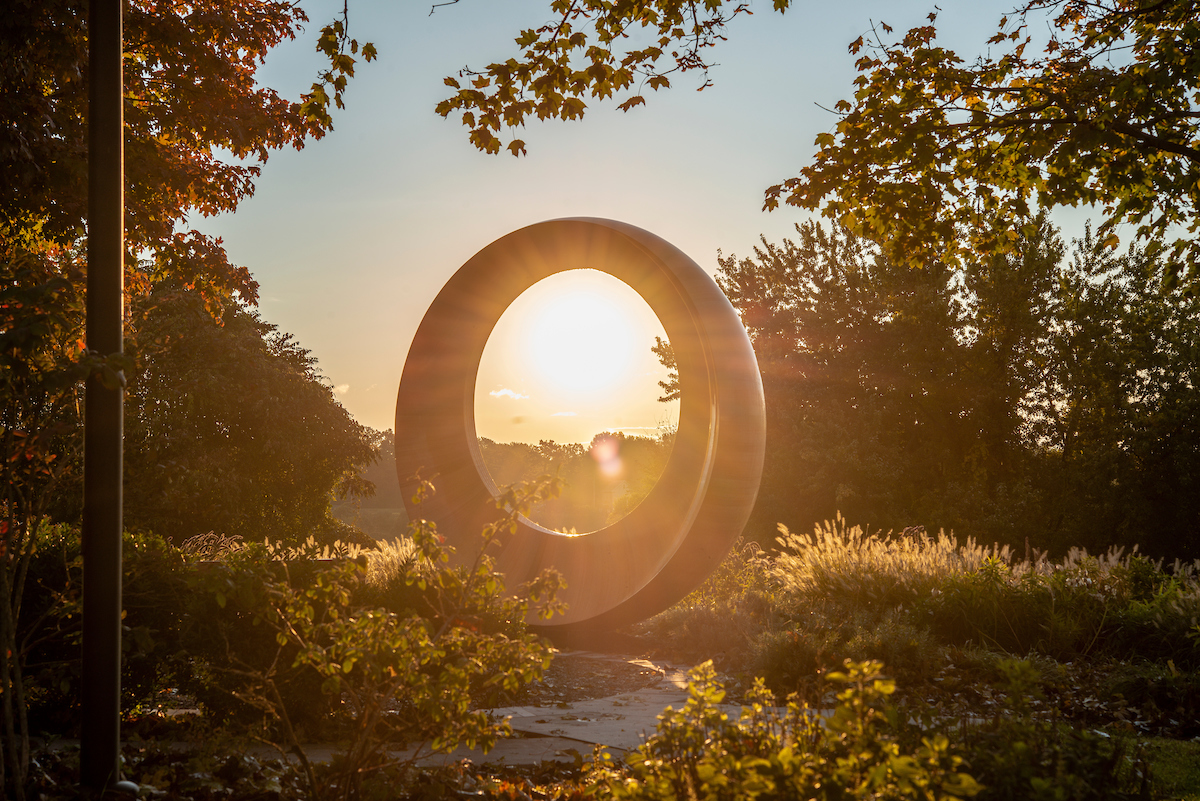 An important link to Southern’s past, Founders Gate was previously located on the Howe Street campus and now stands between Lyman Center and Engleman Hall. Each fall, immediately after new student Convocation, first-year students enter campus by walking through the gate. The tradition continues in the spring when graduating seniors cross under to mark the culmination of their undergraduate experience.

A unique outdoor classroom located outside of the Academic Science and Laboratory Building, the Geological Rock Garden includes 52 rocks that are indigenous to Connecticut. Numerous quarry operators in the area donated boulders for the display, which was created with the aid of Thomas Fleming, professor of earth science. Some of the boulders are from Stony Creek Quarry, which provided stone for many iconic buildings and monuments — including the base of the Statue of Liberty, Grand Central Station, and the Smithsonian Institution.

Set along a well-traveled path outside Engleman Hall, the stainless steel sculpture, “H20: Liquid Zone,” was designed by award-winning international landscape architect Mikyoung Kim. Rain, snow, and ice collect on the sculpture, changing the view on an ongoing basis. The artist’s stunning portfolio also includes the Crown Sky Garden in Chicago, the roof garden of the John Hancock Tower in Boston, and the ChonGae Canal Restoration Project in Seoul, Korea.
Commissioned through Connecticut’s Art in Public Spaces Program

Nature lovers are invited to look at West Rock in a whole new light courtesy of the environmental sculpture, “End of the Line/West Rock,” which was installed in 1985 on the Farnham Avenue-side of Brownell Hall. The sculpture was designed by the late Nancy Holt, a pioneer of the land-art movement, which began in the late 1960s in response to growing awareness of environmental issues and debates about what constituted “real” art. In this work, two rings frame views of West Rock, showcasing the geological formation as an art object.
Commissioned through Connecticut’s Art in Public Spaces Program

Is it an owl’s outstretched wings, an open book evoking the quest for knowledge, or, perhaps, both? Perched on top of Engleman Hall, this sculpture can be seen throughout much of Southern’s campus.

Every cloud has a silver lining, and, on campus, it’s the rain harvester located outside of the Academic Science and Laboratory Building. Named in recognition of the South Central Connecticut Regional Water Authority for the organization’s leadership-level support, the rain harvester is ecologically sound as well as beautiful. Water drains into a 40,000-gallon underground collection system that is used to water surrounding greenery — reducing the need for irrigation of the area by 50 percent. An ultraviolet-purification system eliminates bacteria. There’s a new owl in town: a five-foot wide bronze sculpture installed outside of Engleman Hall in 2018. “Hopefully, we’ll start some new traditions,” says Michelle R. Johnston, director of alumni relations, who foresees students commemorating milestones like commencement by photographing themselves next to the sculpture or touching it for luck. Those who haven’t mastered Southern’s sundial turn to the Hilton C. Buley clock. The bars light up in blue to show the hour, while the dots glow a golden hue for minutes. The clock was installed in 2015 as part of the library renovation. For a picturesque view of campus, go to the fourth floor of the library and look out of the clock’s transparent face.

Rising nearly 50 feet, the Engleman Hall tower sundial built in 2005 is an award winner. The Connecticut chapter of the American Institute of Architects named it the top design in the art/architecture category in 2006. The project’s architects are Howard Hebel (Herbert Newman & Partners) and Frederick Sawyer, who is a co-founder of the North American Sundial Society.

Set on a hill overlooking the campus pond, the bronze sculpture, “Serie Metafisica XVIII,” was created by Herk Van Tongeren and installed on campus in 1983. In 1987 the New York Times fittingly described the late sculptor’s work: “The walls, columns, and steps of the theaters were mysterious and incomplete. They suggested Greek and Roman theaters, but it was unclear who would take their place on stage and what roles they would assume.” On sunny days, students are often found sitting on the sculpture, bringing Tongeren’s vision to life.
Commissioned through Connecticut’s Art in Public Spaces Program

Buley Library is home to four Tiffany windows created by one of America’s most celebrated artists, Louis Comfort Tiffany (1848-1933). The three arched windows located in the first floor Learning Commons were donated by the historic First Church of Christ in New Haven after it was renovated. The fourth window, known as the “Congregational” window, was donated by the North Stonington Congregational Church in the 1990s — after being stored in a barn on a dairy farm for more than 30 years. Searching for the hidden Owl is a time-honored tradition at new student orientation. The search begins in Engleman Hall.

Southern’s first Alumni House was dedicated at Homecoming on Oct. 29, 2016. The home away from home for Southern graduates is located at 131 Farnham Ave., in what was formerly the Admissions House. The latter was relocated to the Wintergreen Building to create a one-stop student services area.