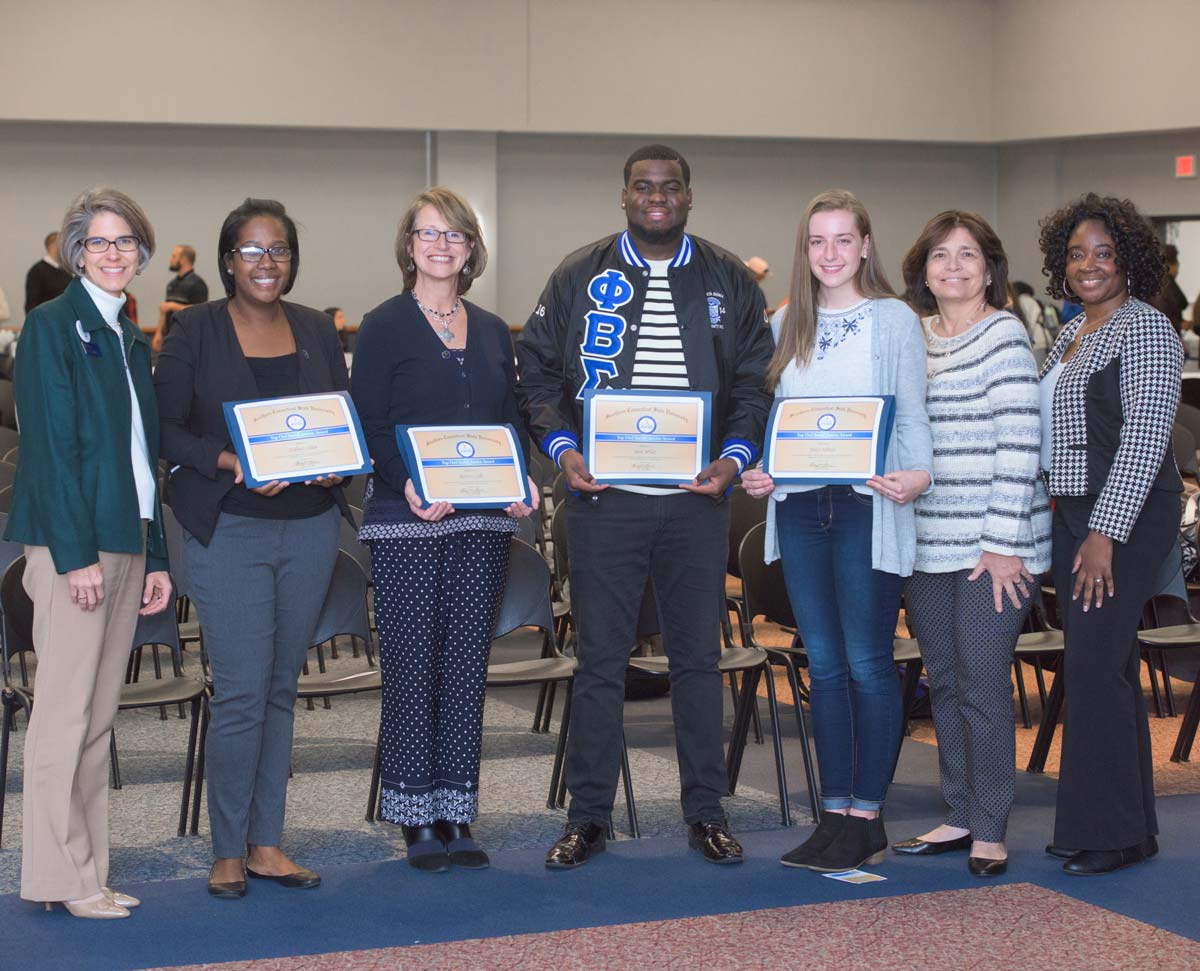 The Top Owl Social Justice Award is given to recognize contributions in helping the university achieve its mission of creating and sustaining an inclusive community that appreciates, celebrates and advances student and campus. This award, selected by the President’s Commission on Social Justice, will be awarded each month from September-March to recognize the contributions, leadership, and service of a worthy faculty, staff, part-time and full-time student. Each award recipient is nominated by another member of the Southern community or is self-nominated. Individuals are nominated based on their work in addressing issues of diversity, inclusion and social justice through:

Deborah Weiss, professor of communication disorders, nominated Cook, writing that Cook “has run numerous educational sessions for students, faculty, and staff on autism and other disabilities in order to facilitate the inclusion and acceptance of individuals with disabilities on our campus. She continuously seeks new information and research that will improve the lives of those with disabilities in order to incorporate this knowledge in her teaching and her clinical work in the Center for Communication Disorders.

“She has been very active in social justice committees and activities on campus. She initiated and chaired a committee on campus that was convened by the Provost to explore campus services for individuals with autism. This was later expanded to include all disabilities. She continues to work for implementation of the organization and accessibility of these services and as a tireless advocate on behalf of this community.”

Mandi Kuster, associate director of residence life, who nominated Alston, wrote that Alston “Alston carries out the social justice mission every day. . . She was a part of the Student Affairs Cultural Competency Committee and has been an integral part of the planning and training team for the Student Affairs division. She has done numerous training around the topic of Social Justice for Peer Mentors, RAs and staff members. Her work in Student Involvement/Leadership Development is daily around Social Justice and educating our students.”

Sal Rizza, director of new student and sophomore programs, nominated Wilder, and wrote that, “As the President of Phi Beta Sigma’s Omicron Theta Chapter, Sean has been working hard to incorporate social justice in everything the chapter works on. Most specifically, Sean provided leadership in coordinating the Chapter’s program for Social Justice Month “All American: A Panel on Sports & Politics” in which a panel including the Director of Athletics, a student Veteran, and several students discussed the ongoing conversation regarding sports and politics. Additionally, Sean carries the mission of social justice in all of his positions including in his role as a SEOP Peer Mentor, Resident Advisor and Orientation Coordinator by creating inclusive and welcoming environments which align with our university mission.”

Julia Irwin, professor of psychology, nominated Holman. Irwin wrote that Holman had “just presented her Honors Thesis, which is a Bystander Intervention Training to prevent sexual assault on campus. Jessie trained over 300 SCSU students in INQ with this program, making the campus a safer place. She will leave this program, a self-contained peer intervention to the University, when she graduates in May. Jessie is a co-founder of PEACE (Peer Educators Advocating for Campus Empowerment) and has worked to assist victims of human trafficking.”

Alfaro was nominated by both Christine Barrett, associate director of academic advisement, and Jordan Jones, adviser in interdisciplinary studies. Barrett wrote in her nomination that Rivera-Alfaro “exemplifies cores values of social justice in her work as the advisor to the Organization of Latin American students since 2008.” Beyond the university, Barrett wrote, Rivera-Alfaro’s community involvement includes providing free tax preparation and Spanish translation services to low-income families through a School of Business program; representing Southern at local Latino college fairs; doing college outreach to Latino communities in Meriden and New Haven; and currently researching the possibility of SCSU hosting the annual New England Latinx Student Leadership Conference, among other activities.

Jones wrote that Rivera-Alfaro “has long been committed to Southern’s core values of access, diversity, student success, life-long learning, and community involvement, long before those values were formally established/recognized at Southern.” Jones referred to her work with OLAS and with the free tax preparation service and added that she “has actively engaged in recruitment of underrepresented students and employees, representing the university at numerous evening and weekend events, including Hispanic-focused events. . . [and] spends countless hours per week giving back to our students, to our community and building important bridges for the University. She’s often tapped to provide representation for the university at various community and regional events.”

Dian Brown-Albert nominated Chaudhry, calling him “a remarkable young man who has inspired his peers, faculty, staff and the Southern community to live up to the SCSU core values around social justice.” Brown-Albert wrote that “Haroon’s participation in the SCSU 2017 Social Justice Retreat where he dialogued with students around issues of race, class, faith, and sexual orientation was amazing. As a Muslim student, Haroon travels to classes where he does presentations on Islam. This is free of charge and out of his commitment to teaching people about the beauty of Islam. Due to his passion and commitment to his faith, he advocates for the Muslim community through his everyday life by being respectful, compassionate and coordinating activities around these issues.”

Albert added that Chaudhry is part of the Muslim Student Association where he works with them to promote and produce programs for the university, such as National Hijab Day. “He is dedicated to maintaining the culture, heritage, and practices of Islam and Muslims,” Brown-Albert wrote, “as well as combating common stereotypes and misunderstandings about Islam and Muslim . . . Haroon is truly an asset to our institution as he dedicates his life to promoting human dignity and inclusivity at SCSU.”

Jessica Powell was nominated by Laura Bower-Phipps, associate professor of elementary education, who wrote that “The foundation for Dr. Powell’s teaching and her scholarship is social justice. She is a true scholar activist. Her scholarship addresses the need for white individuals to join in the Black Lives Matter movement not only as activists, but also as accomplices who take risks to support marginalized groups and individuals. Other scholarship calls for early childhood teachers to queer their practices to create spaces for children who are transgender and gender creative. Within her teaching, Dr. Powell encourages her students to critique educational systems that do not treat children equitably. I teach many of the same students as Dr. Powell, and I can say with certainty that they are changed as a result of her classes. Not only does Dr. Powell embrace social justice, she inspires her students to do the same.”

To nominate a member of the Southern community for a Top Owl Award, visit the Social Justice website.