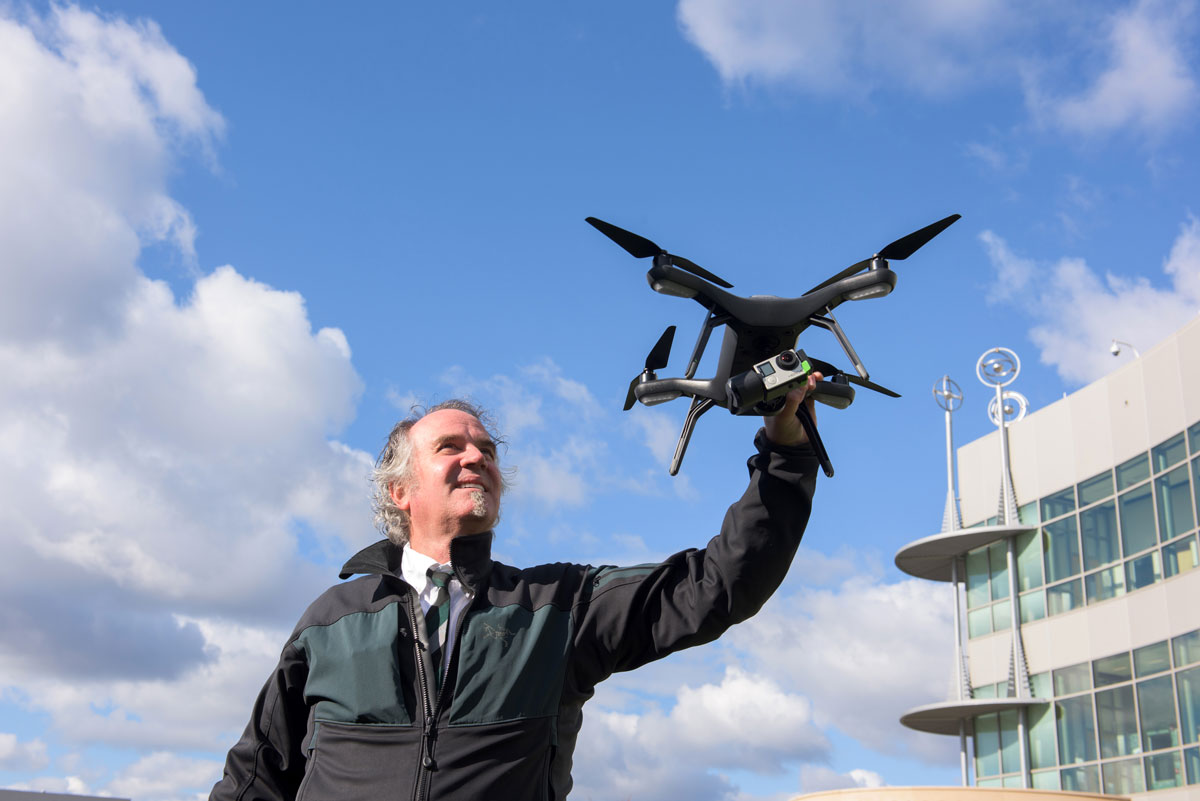 In April 2010, Scott Graves was watching news coverage of the BP Deepwater Horizon oil disaster in the Gulf of Mexico. A geologist and oceanographer who spent his early career making maps from aerial views of the landscape, Graves began wondering: How would scientists document the spread of the spill along the coastline and into surrounding marshes?

Curious, he started poking around the internet. The federal government had basically shut down flights over the area, but Graves learned a small group of researchers was getting aerial shots by dangling cameras from kites and balloons.

Thinking it would be great to bring the technique to Southern, Graves, associate professor in the Department of the Environment, Geography and Marines Sciences, decided to learn what he could and worked with his department to acquire a balloon and a kite.

“I just started ‘MacGyvering’ camera systems together,” he recalls, referencing the 1980s TV character known for cobbling together everyday items to get out of tough situations. Then, a few years later, drones became widely available, and Graves thought: “That’s it.”

Today, Graves is a pioneer in the growing movement to use drones for environmental research and conservation — and he’s passionate about sharing that technology with Southern students. Over the last year, he has donated about $10,000 worth of drones, mapping software and other related equipment to forward the effort at Southern.

He has also gifted about $70,000 to establish the Osprey Endowed Scholarship for Environmental and Marine Studies, named for the coastal bird that flies at the same altitude as his drones. The scholarship is earmarked for undergraduate and graduate students who are conducting research with a faculty mentor through the Werth Center for Coastal and Marine Studies or the Center for Environmental Literacy and Sustainability Education, both research centers at Southern. Although it’s not required, the first two recipients have included drone technology as a focal point of their projects.

Peter Broadbridge, who is pursuing a master’s degree in science education at Southern, notes that receiving the scholarship in 2015 changed his perspective on life — and possibly his career path. Broadbridge, who studied the health of marshes along West Haven’s Cove River, worked with Graves to parlay the scholarship into a NASA-funded grant to continue his drone-assisted research. This year’s winner, Christine Woehrle, is using drones to study the health of local vineyards.

Graves’ commitment to students and the environment also is forwarded through his leadership-level involvement with GLOBE — The Global Learning and Observations to Benefit the Environment Program — which is sponsored by the U.S. National Aeronautics and Space Administration (NASA) and the National Science Foundation (NSF), with support from other government agencies. An international science and education program, GLOBE connects students, teachers, scientists and citizens from around the world, inviting them to conduct hands-on science related to their local environment and put it in a global perspective. GLOBE’s 21st annual meeting and student research experience is being held at Southern from July 30 to Aug. 4.

In Graves’ opinion, drones hold enormous potential as a less expensive, more effective way for environmental scientists to collect data from aerial perspectives. “This is an incredibly powerful tool for getting information on landscapes that might otherwise be inaccessible,” says Graves. “In the past, if you wanted to have aerial photography, you either had to hire a helicopter or an airplane — either of which needed to fly very high. But now, for a couple thousand dollars, you can get a drone that carries a 4K camera, learn how to fly it yourself, and get very low-altitude imagery.”

Graves’ obsession with learning about his surroundings dates back to childhood. Growing up in Malibu, Calif., he spent hours with friends exploring the creek near his family’s home.

“I’d get home from school and my mom would say, ‘See you at sundown,’” he recalls.

During his senior year in high school, he took an earth science class and decided he wanted to become a geologist. After earning a bachelor’s degree from the University of California-Santa Cruz, he took a job with the U.S. Geological Survey, where he was charged with producing a map of coastal erosion in the Arctic.

In 1986, Graves’ quest to earn a doctorate in oceanography led him to the University of Rhode Island. But funding for research was sparse, and Graves ultimately graduated with a master’s degree when his major professor retired abruptly before he could finish the program.

“I was devastated because I’d spent five years in a Ph.D. program and passed all the preliminaries and qualifications,” Graves says. “Here’s your dream. You’re pursing it and the door slams right in your face. So what do you do? You have to change directions.”

He took a break from academia to work as a snowboard instructor before landing a job with a nonprofit organization, where he co-designed an environmental education curriculum for middle schoolers. While presenting at a conference at the University of Idaho, he was recruited into a doctoral program, and earned his doctorate in science education in 1999.

It was there that he got his big break — authoring a successful $7.5 million federal grant to train teachers from New Jersey to Oregon in how to use GIS (geographic information system) technology to document 200 years of change along the Lewis and Clark Expedition Trail — a career highlight that would consume his time for the next five years.

In 2005, wanting to move to an urban area near the coast, he came to Southern and never looked back. “I fell in love with the programs and the people in this department,” he says.

While he has made smaller donations to his various alma maters, he reserves the bulk of his philanthropy for Southern. Graves also was among a group of benefactors — that included the Werth Family Foundation and others — who recently bought the Southwest Ledge Lighthouse in New Haven for student research.

Reflecting on the ups and downs of his own career, Graves says his philanthropy is a “pay it forward scenario,” noting he’s “had some breaks along the way.”