Seeing the World Through Another’s Eyes 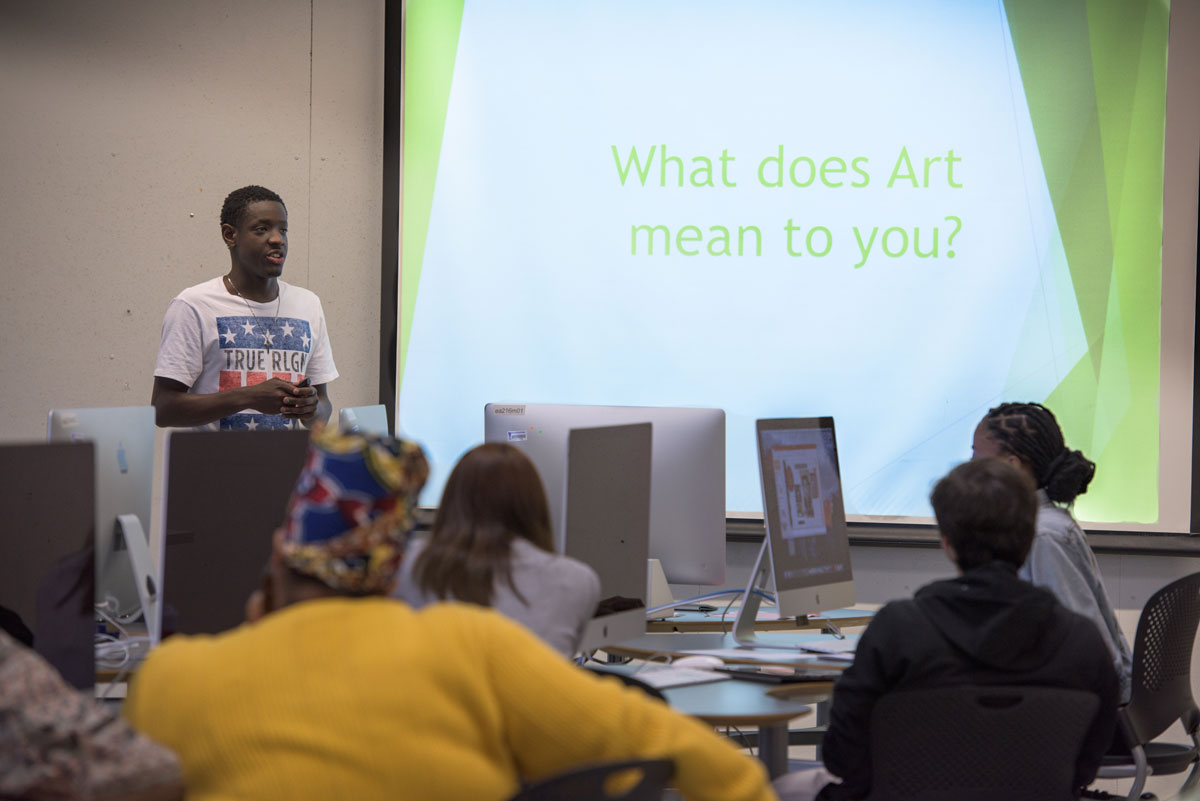 Many students think graphic design is all about technology – the software programs like Quark and InDesign that are bread and butter to graphic designers – and not so much about problem solving. But this semester, students in Alex Girard’s Principles of Graphic Design (ART 215) course learned differently. Girard, an assistant professor of graphic design in the Art Department, challenged his students to have a positive impact on the life of someone else, to and use creative problem solving to make it happen.

“My two main goals in the course,” Girard explains, “are for students to see how much impact a graphic designer can have on perception, and to explore mapping a solution from start to finish.” At the end of the semester, students presented their projects to the class to practice professional presentations of creative ideas.

In the assignment, students were challenged to identify a problem, the problem’s audience, a concept for the solution, and to establish measurable benchmarks on a timeline. The project was very self-directed. Girard wasn’t asking his students for a highly refined design solution but was more focused on concept and process. Critical thinking skills came into play.

“The project is about navigating a process,” he says. “You’re successful in the class if you do this. The focus is not on the end product. And this class is a safe environment in which to experiment and maybe fail.”

Girard was particularly impressed with the thoughtfulness with which his students developed their topics and projects. They “tackled some brave issues, and did some really positive work,” he says. One students’ project was about stopping racial slurs, for instance, while another’s was about teen suicide.

Speaking as a graphic designer himself, Girard says, “Graphic design is never about you – you are the conduit of something external. Your job is to see the world through someone else’s eyes.” One of the reasons he likes teaching graphic design at Southern is its liberal arts environment. He says many graphic design programs are very technology-focused, but the liberal arts education Southern students receive teaches them to communicate well with others and think about the world broadly.

“It’s important to help students beyond just design sensibility and technological competence,” he says, adding that he thinks about what his students will be doing next, beyond college, and talks to hiring directors and art directors to find out what they’re looking for in potential employees. One key skill he often hears them ask for is the ability to communicate well.

Girard’s students and their topics were:

Pause Movement – Jordan Watkins
“The outcome is to let people know that it is okay to put your phones down for once.”

Stop the Slurs – Julies Ly
“I hope that this movement will bring an understanding that racial slurs hurt.”

More than Something on a Wall – Trevon Homeward-Bennett
“I’m hoping that after this show other people would be inspired to create their own art, with their own interpretations and have fun with it.”

Not a Starter Fish – Julia Zeidler
“I am raising awareness about proper Betta fish care to eliminate ignorance about how these beautiful creatures are to be kept and raised.”

Intro to Diving – Salim Lemond
“I hope that this [project] will bring forth to viewers a stronger understanding, as well as an increased interest, in the sport [of diving].”

Stress Relievers – Fabian White
“I am bringing the problem of stress relievers into the light.”

Have You Smiled Today? – Whitney Lane
“I am striving to let people know that you in fact do matter and you have made such a great impact on at least one person’s life.”

Strength is Beauty – Lee Langley
“I am intending to inspire and motivate a plethora of young girls to embrace their outer strength and beauty as well as, inner beauty.”

Stop. Remember. – Michelle Tenney
“My intended outcome is to promote relaxation and decompression, both physically and through social media.”

Smash Community – Edwin Vargas
“The Smash Brothers Community is torn between two games. Using Twitter, I will bridge the two communities by creating and sharing content that both can share and understand.”