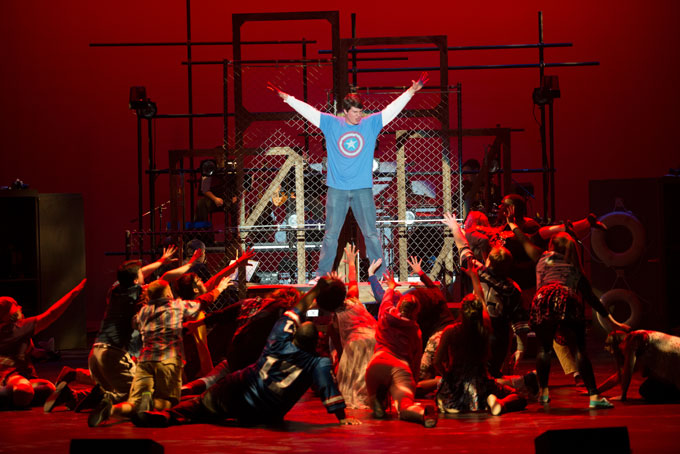 Senior Elizabeth Beale was given a Special Mention in Costume Design. Junior Olivia Cintron was cast in a show that was produced as a part of the One Act Play Festival. And seniors Teddy Hall and Cecilia Curachi both made it to the final round of the Irene Ryan Acting Competition, with Teddy ultimately snagging first alternate — he came in second, in other words. Both students were coached by Kaia Monroe Rarick.

A small department competing with much larger BFA programs and MFA programs, the SCSU Theatre Department did very well — congratulations to all who took part!

The SCSU Theatre Department was invited to take its production of “Godspell” to the regional Kennedy Center American College Theatre Festival at Cape Cod, Mass. The regional festival — encompassing all of New England and upstate New York — represents the very best of college theater in all aspects. “It’s equivalent to making it to the regional tournament in a sport,” says Theatre Department Chair Kaia Monroe Rarick, “except there are no cheerleaders.”

Out of nearly 200 productions considered for inclusion in this year’s festival, only six were chosen. The Theatre Department’s fall musical, co-produced with The Crescent Players, “Godspell” was the only show from Connecticut to be invited. Directed and choreographed by Associate Theatre Professor Larry Nye, this well-known musical takes the gospel according to St. Mark and brings it into modern times. Nye took the modernization one step further by setting the show in a construction zone — ostensibly a new performing arts center — and utilized props and costumes from previous Crescent Players’ shows for a deconstructed effect.

It was both the innovative production concept and powerful ensemble singing that attracted the Kennedy Center respondent’s attention. The cast of 19 — made up of theater majors and non-majors — belted out such classics as “Day by Day” and “By My Side” for the festival audience on January 29.