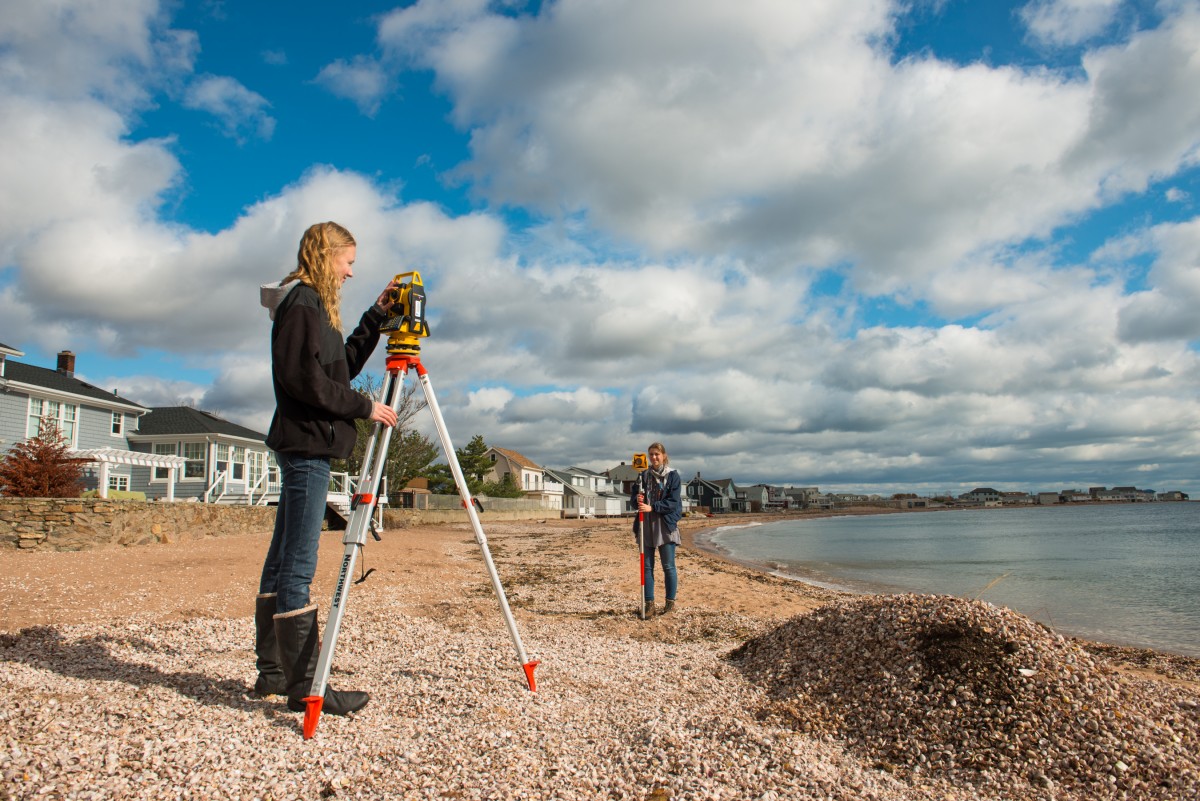 Southern is assisting the town of East Haven in trying to prevent a repeat of major property damage inflicted upon the community two years ago by Hurricane Sandy.

Michelle Ritchie and Fatima Cecunjanin, two students under the guidance of James Tait, professor of environmental studies, have been examining elevation levels along the coastline and how much of a factor they were in predicting damages. “In a sense, we have been looking for the black box for East Haven – what happened and what can be done to make the shoreline less vulnerable,” Tait said.

In fact, that research earned them first place in the student poster competition at the recent New England-Saint Lawrence Valley Geographical Society’s annual meeting. Their work was placed into a broader context that included previous research conducted by Southern students related to the East Haven coastline.
“Right now, we’re looking at coastal vulnerability – which areas are more prone to heavier damage,” Tait said. “We also want to see what we can do to improve the coast’s resilience.”

Among the students’ tasks are to create flood maps that can depict this kind of data, as well as make projections in terms of what would have happened if the storm had occurred during high tide in the greater New Haven area, according to Tait.

Their work has caught the attention of staff members in the Office of the East Haven Town Engineer, who say they are impressed with the magnitude, quality and thoroughness of the research. In fact, they estimated that the work performed by the students and Tait would have cost the town several hundred thousand dollars if it had hired a company to do it. And some of the students’ work has been forwarded to the Federal Emergency Management Agency (FEMA).

Meanwhile, Tait and some of his other students are also looking at the West Haven coastline.

“In West Haven, we have students looking at which beaches are the most stable,” Tait said. “In addition, they are studying where the beach sand is disappearing and where it might be accumulating.”

One of the students, Kaitlyn Stobierski, will do a cost-benefit analysis in terms of where it might be most cost effective to add sand and manage beaches. Stobierski, along with Catherine Cota and Steve Krozier have collected two years of data about beach stability.

“The price to nourish beaches with extra sand has skyrocketed over the last 40 years,” Tait said. “It costs more than $800 per linear foot today, compared with about $55 per linear foot back in 1957, when a similar beach project was conducted in West Haven.

“Therefore, a town like West Haven wants to spend its money wisely when trying to restore its beach areas,” he added. “You need to know which areas would benefit in the long run from additional sand, and which areas are likely to lose the sand in the long run.”

Mark Paine, assistant to the commissioner of public works in West Haven, said he is excited about seeing the impending cost-benefit analysis.

“The analysis will give us the ability to make informed and justifiable decisions,” Paine said.

Tait hopes to continue SCSU’s work along the coastline in the future with plans to look at the Milford beach areas, and perhaps to Fairfield and other communities. “Certainly, East Haven was the poster child for damage due to hurricanes Sandy and Irene.”