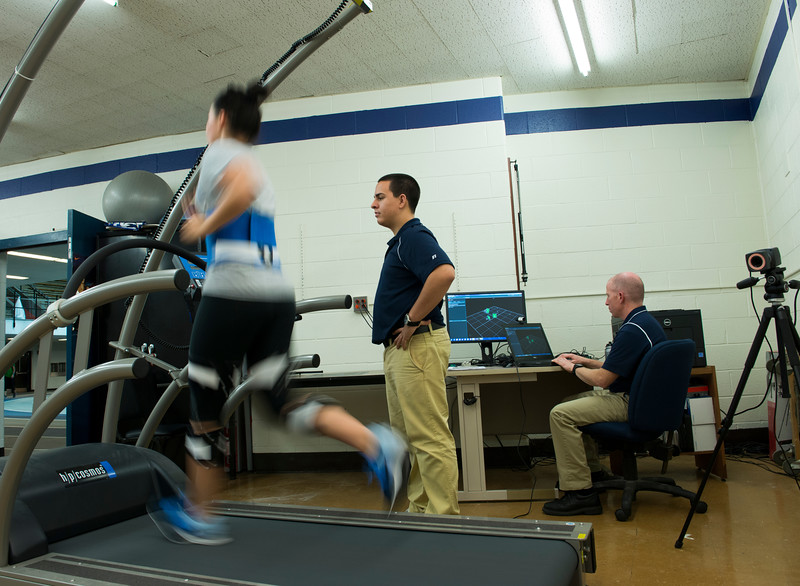 The best treatment for running injuries is to prevent them from happening in the first place. And while proper warmups, strength training and a stretching routine certainly help, some runners are more vulnerable to certain types of injuries. The problem is: they don’t always know about those inherent vulnerabilities until an injury already has occurred.

But Southern’s Human Performance Lab recently acquired a state-of-the-art piece of equipment that can provide runners with the data they need to reduce the chances of repetitive stress injuries. It’s a treadmill that uses cameras and technology to provide a three-dimensional gait analysis. The equipment shows a runner’s form and the flaws that may be emanating from their gait – whether it be a knee that rotates internally too far; a foot that pronates with too much velocity; or a hip that isn’t lining up quite the way it should.

“We are delighted to have this high-tech device at Southern and encourage runners of all ages to come in and have their gate assessed,” says Robert Gregory, assistant professor of exercise science. “It is an opportunity for people to see what may cause them problems in the future so that they can deal with it proactively. For example, if a runner displayers signs of a quadriceps weakness, they can begin a strengthening and stretching program that will help prevent injuries related to that condition.”

Gregory says that while Southern does not currently offer physical therapy, the new equipment provides the data that can be taken with them when consulting with a therapist, trainer or doctor.

He says individuals will receive an overall injury risk score, as well as component scores evaluating a person’s ankle, knee and hip. For purposes of this test, the higher the score on a scale of 1-100, the less likely a repetitive motion injury may occur.

“This piece of equipment, to my knowledge, is available in less than 50 locations throughout the United States and Canada,” Gregory says. “I don’t believe there is currently another site in Connecticut that has it.”

He says that studies show that between 50 and 75 percent of runners are injured every year, and that about half are re-injuries. “You can’t prevent all injuries, especially those where a quick, sudden movement is the cause,” Gregory says. “But you can reduce the overuse injuries through strengthening, stretching and sometimes workout modification. Assessing problems in their early stages is a good first step in injury prevention.”

Southern was able to pay for the equipment, totaling about $135,000, through a state bond issue.

Gregory notes that while a person’s gait is not identical on a treadmill as compared with running on a road, trail, or track, it is usually very similar. “It’s close enough where we can make a very accurate evaluation,” he says.

The cost for a member of the general public to have the analysis conducted is $150, which Gregory says is generally less expensive than to have the test done in Boston or New York City. Faculty and staff can have the test done for $75, while a student can have it done for $25. Those who are willing to have their results included in a research database may have some or all of the costs waived, although the process takes a little longer with a 15 to 20 minutes or running assessed at various speeds.

Gregory is hopeful that assessments may begin in November. For further information, contact Gregory at (203) 392-6036 or at gregoryr3@southernct.edu .