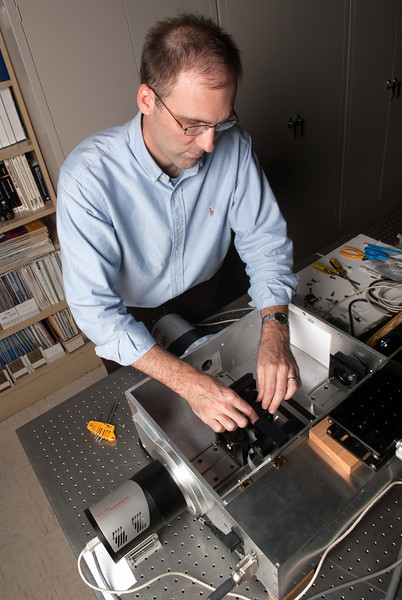 Six years ago, Elliott Horch finished the development of a telescopic appendage for the National Science Foundation that provided astronomers with stunningly crisp images of outer space. The instrument, called a Differential Speckle Survey Instrument (DSSI), has been used to learn more about binary star systems, and was even used by the Kepler mission to look for planets that have the potential to be earth-like.

And now the professor of physics at Southern is at it again – this time to produce a double-barrel telescope that would generate ultra-high resolutions with even more detailed information about celestial bodies. It’s called a portable multi-channel intensity interferometer. Horch says it’s essentially a two-telescope system, where the two scopes are set up far apart, but essentially look at the same target and function as one super telescope.

“With my previous instrument, the DSSI, it was like putting eyeglasses on a telescope,” he says. “This new project will be like remaking the whole eye.”

The NSF recently awarded Horch a $300,000 grant to create this new telescope over the next two years.

Horch says the primary use will be to look at bright, very close binary stars. Binary star systems feature two stars that revolve around each other. Many physicists, including Horch, believe the sun originally may have been a binary star. In essence, the new telescope would potentially help astronomers learn more about our own sun.

“But we also want to use the new device to study the disks of nearby stars and potentially for exoplanet research,” he says. He notes that the telescope would enable astronomers to see distant stars the way we see the sun and the moon now – as round disks, rather than as points.

“If it works well, it could give us the impetus to create similar instruments in the future with even larger separations between the ‘two telescopes.'”

The grant also is enabling Horch to hire three Southern students to assist him with this project. They include Justin Rupert, a student pursuing an M.S. degree in applied physics; and Sam Weiss and Dan Nusdeo, who are senior physics undergraduates.

“I am very excited to have an opportunity to take part in this project,” Rupert says. “This really could be groundbreaking work.”

In addition, the grant is providing SCSU with about $140,000 in cutting-edge equipment that will be unveiled in the SCSU Academic and Laboratory Science Building that is scheduled to open in 2015.