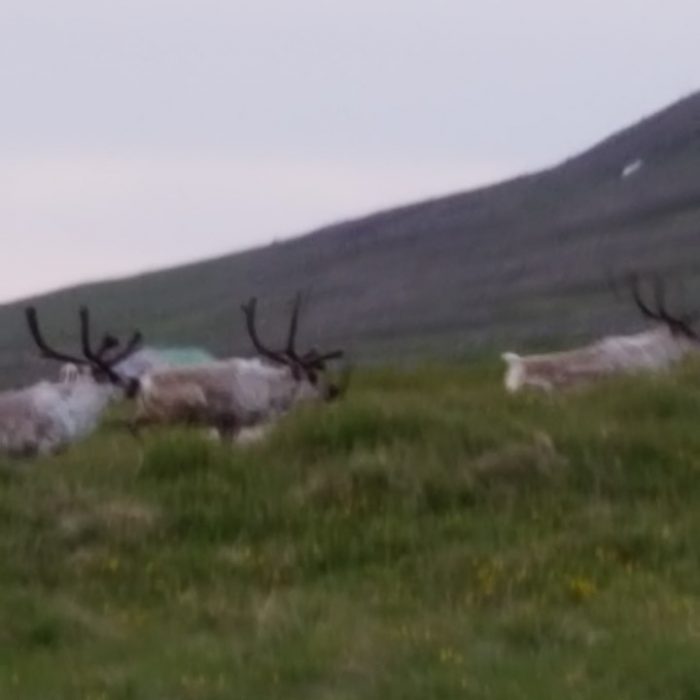 By Hope Finch and Steven Cardinal

As our time at Skalanes begins to come to a close, Steve began to recruit some friends for a reindeer stalk to study the animals. As this was a much anticipated event from the group, excitement was at an all-time high. The crew departed the house with a look of determination in their eyes. Initially they began at a waterfall where they had previously seen the herd, after surveying tracks and scat it was clear they would be best to try another area. As time passes the hopeful explorers had searched the hills, valley, and mountains with nothing but tracks to show for it. After seven long and grueling hours the group began to lose hope…the trail mix and fruit stores that had sustained them had been depleted, and their initial excitement began to morph into disappointment. The group returned, reporting their comparably mundane findings back to the house. After a good meal and a few rounds of cards the three had almost forgotten the long and fruitless day… That is until Professor Heidkamp entered the room with a sinister smile on his face…. In a 20 minute drive to town Heidkamp happened to “stumble upon” a herd of 12 deer who were a mere feet from his vehicle. The following day on a walk into town to celebrate Independence Day, the unsuccessful herd trackers were delighted to spot the herd unexpectedly walking the hills above them.

This trip is a a collaboration between the department of the Environment, Geography and Marine Sciences at Southern Connecticut State University and the Geography program at Liverpool John Moores University.

A total of 65 SCSU students have participated in the Iceland program for the past six years led by Dr. Heidkamp.